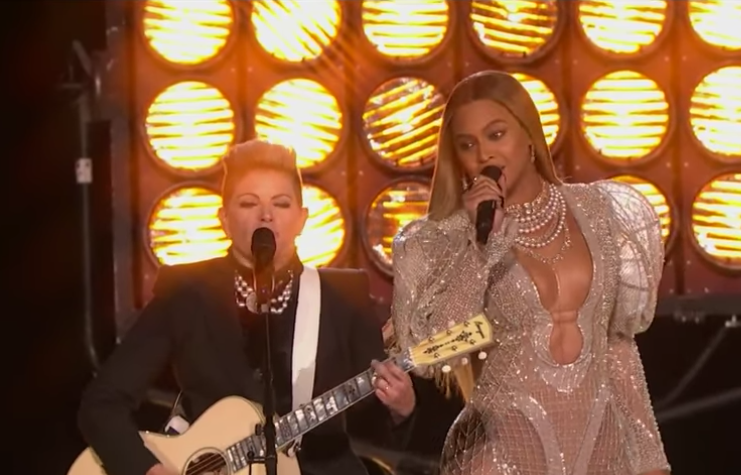 The election may currently loom large over America like a toupée-shaped storm cloud, but yesterday, there was one rumor floating around that managed to cut through the noise: Beyoncé might perform at the CMA Awards. Speculation swirled around Nashville and online before it was officially announced late Wednesday afternoon that Queen Bey would, in fact, make an appearance, though details leading up to the show were limited. It was a curious phenomenon, as the bulk of the chatter surrounding “Country Music’s Biggest Night” (ABC’s words, not ours) surrounded an artist outside the genre. In many ways, though, it was a harbinger of what the rest of the evening would bring.

Broadcast live from Nashville’s Bridgestone Arena, the CMA Awards are part awards show, part concert, part ABC product-placement opportunity, helmed since 2008 by country stars Brad Paisley and Carrie Underwood. This year was a special one, as the show celebrated its 50th anniversary and grappled, on stage, with the stark contrast between what 1967’s country, which honored Eddy Arnold with the first-ever Entertainer of the Year trophy, and that of today (Luke Bryan took home that same award last year) look like. The show opened with a medley of classic country songs performed by the genre’s patriarchs and matriarchs: Vince Gill honored Merle Haggard’s “Mama Tried”; Roy Clark and Brad Paisley paid tribute to Buck Owens with "I've Got a Tiger by the Tail."

Many of the other artists involved — including Reba, Charlie Daniels, and Dwight Yoakam — performed their own songs. As iconic artists sang tributes to themselves, you had to wonder: Are there not current artists suited to paying tribute? And while, yes, there are — two notable CMA snubs, Margo Price and Brandy Clark, come to mind — the medley opened the show on a dissonant note. Today’s commercial country is not the country of Hank Williams or Merle Haggard. It's the country of Luke Bryan, whose teeth far outshine his mediocre vocals, and of Florida Georgia Line, a wildly popular duo who, while certainly writing some catchy songs, are more in line with Top 40 than anything with a real twang.

Many of the evening's low points, like an entirely forgettable performance from Bryan of "Move," came from the new guard. Of course, there are still plenty of up-and-comers keeping the genre vital. Maren Morris, who rightfully won New Artist of the Year, delivered one of the best performances of the evening when she brought out the McCrary Sisters and the Preservation Hall Jazz Band for a show-stopping take on "My Church." It was also a crossover moment that would fall in line with some of the show's other standout performances.

And it wouldn’t be the CMA Awards without a true pop/country crossover performance, the best of which (like last year’s from Chris Stapleton and Justin Timberlake) make up for those that just feel forced. (I know Pentatonix recorded “Jolene” with Dolly Parton, but come on, is that really the best you can do, CMA?) Last night, however, we saw a performance — made all the more urgent by both the day’s rumor mill and the show’s constant promotion of it — that felt less like a crossover and more like the coming together of two kindred artistic spirits: Beyoncé and the Dixie Chicks teaming up for the Lemonade track “Daddy Lessons.”

While it may sound like an unusual pairing on paper, the Dixie Chicks performed the rootsy Beyoncé number, which has been at the center of a debate about what songs can and cannot be called “country,” on their DCX MMXVI world tour this year. More importantly, however, it IS a country song. While Twitter may have been ablaze with cries of, “That’s not country,” you’d be remiss not to consider country’s black roots which run very, very deep. It’s no surprise, then, that the performance, which included a brief interlude of the Chicks’ version of Darrell Scott’s "Long Time Gone,” felt natural, important, and necessary.

And that’s where this show had its moments that truly shone: when country got to show its roots. Another standout moment occurred when Eric Church brought Rhiannon Giddens on stage to perform "Kill a Word," an anti-hate anthem off his Album of the Year-winning 2015 release Mr. Misunderstood. Paired with Dwight Yoakam and Chris Stapleton's joint tribute to Ray Charles, one had to wonder if CMA was hoping to get a little of Americana's Midas touch for themselves.

All three of those performances, while honoring the genre's roots, also celebrated, some subtly and some not-so, diversity and inclusion. (Although it should be noted that, while both Yoakam and Stapleton are fantastic singers, it would have been nice to have an artist of color honoring Charles.) Tim McGraw's performance of "Humble and Kind," a Lori McKenna-penned tune that earned her a Song of the Year win, was a nice moment celebrating love in all its shapes and shades, one that felt all the more poignant in this last week of a particularly hateful election season. The show's presentation of Dolly Parton with the Willie Nelson Lifetime Achievement Award featured a who's-who of women in country, all coming together to honor an artist who embodies the spirit of kindness and inclusion better than perhaps anyone else.

Given the common threads running through the night's high points, it's fitting that Garth Brooks took home the night’s biggest honor, Entertainer of the Year. Over the course of his unprecedented career, he's carved out a space for himself that makes room for country traditions, modern pop sensibilities, and, perhaps most strikingly, unabashed progressivism. (You'll remember Brooks won a GLAAD Award way back in 1993 for his way-ahead-of-its-time-for-a-country-song tune "We Shall Be Free.") While some might consider his success to be in spite of that unique position, it’s more likely because of it. And this year’s CMA Awards show, in its best moments, seemed to be following his lead.