ARTIST OF THE MONTH: The Gibson Brothers 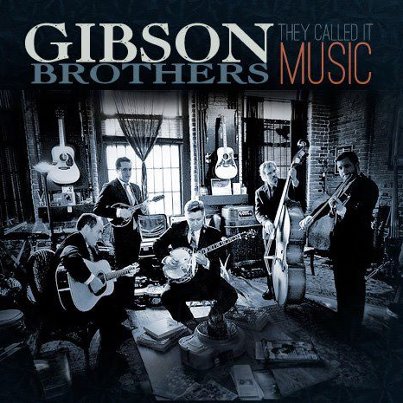 The fact that reigning IBMA “Entertainer of the Year” siblings THE GIBSON BROTHERS hail from the Adirondacks of upstate New York might surprise some, but dedicated bluegrass fans will be quite familiar with this highly-regarded band, fronted by Eric and Leigh Gibson. Since nabbing IBMA’s “Emerging Artist of the Year” honors in 1998, the group has built a reputation through their memorable live performances and impressive recordings.

Eric, the banjo-playing brother, shared his thoughts about his band, the IBMA victory and their new Compass Records release They Called It Music.

What went through your mind when you heard your band’s name announced as “Entertainer of the Year?”

Shock! We didn’t expect it at all. The competition was all friends of ours. We thought another band would win it because of this or that; I never thought about us. Maybe it was our turn – that we were just being rewarded for hanging in there and consistency. I’ve had a lot of people say to me: ‘Eric, you guys deserved it; you’ve earned it.’ I think we’ve made some music to be proud of.

Did winning the award influence how you recorded your new album?

I think we went in to the recording studio with more confidence, but not cockiness or overconfidence. This is about the music; not about hype. I didn’t see bringing in a ton of guest players just because we won an award. I love my band.

I was thinking about it the other day. We made an album with five guys who have probably played together 300 shows together or more. There’s a comfort level there. Making good music is about being comfortable and having musical conversations with the guys you’re making music with. You can put the hottest musicians together and it’s not glued together like a band that has traveled and worked on the road together. I think you develop a sound that way.

The album has a rather wide range of covers (from Loretta Lynn to Pee Wee King to Mark Knopfler). How do you pick a song to record?

Leigh and I talked a lot about this in getting ready for this record. We wanted to vary our tempos and themes – to have each song have a different feel from every other song on the album. We are always on the lookout for a good song. We love Mark Knopfler. That song (“Daddy’s Gone To Knoxville”) has been in the back of our minds for a few years, and we never cut a Delmore Brothers song before. It felt great to play tribute to them, plus it’s a great gospel song (“Home On A River”). We thought our harmonies sounded as tight as they ever have on that song.

How do you work out singing harmonies with your brother Leigh?

Leigh and I have been singing together since our teens, so maybe it comes easier than somebody who hasn’t been doing it that long, but we still work at it. All those vocals were done live on one mic facing each other. It sounds like we do live on a good night. We’ve been doing that on the last several records. It works a lot better for us than having one guy going in and singing his lead and then the other guy going in and trying to harmonize with that.

There aren’t a lot of brother duets in the business right now. It’s kind of our calling card. I think that is the biggest factor in us choosing material. We thought about doing a brothers’ tribute record, which is something we will do at some point, but we got writing a bunch of songs and the ones we ended up using were ones that lent themselves to harmony.

How do you write the songs with your brother?

It all depends. My brother loves to swoop in on a song that is 90% done and make a suggestion that I can’t ignore. My natural inclination is that it is good the way it is and then I think “dang it, he’s right.’

This time around I had more stuff; Leigh didn’t contribute as many original songs as he normally does. Maybe next time he’ll have more stuff ready. I am proud of the originals on this record. I think it is some of the strongest writing we’ve done.

Are there ones that you are particularly proud of?

I really like the title track. That one kind of wrote itself. I was given the idea by Joe Newberry; he’s written a lot of songs for us for the last few albums. He told me a story about asking an old man who played the banjo what they called his music when you were a young man. Did they call it country or bluegrass or old time folk? ‘Son, they called it music.’ We just had a good laugh about that. Then it occurred to me weeks later that it’s a song and I have to write that. I called Joe up and said ‘Joe, we wrote a song.’ I would never have written that song if it wasn’t for him.

I also thought about how important music has always been to people – the music that was never recorded and the music that was made not to make a buck. I remember my grandfather singing me a song that he had learned in the lumber camps and thinking ‘how cool is that?’

The one we wrote with Shawn Camp (“Something Comin’ To Me”) is another favorite. We wrote that less than a month after our dad died. Shawn is one of our heroes and we’d been wanting to write with him forever, and we finally got the chance but nothing was happening.  It wasn’t him; it was us. We just had this cloud over us but we didn’t realize it. He was very nice and said ‘boys, some days I just don’t have it’.”

He got up and left the room, and we looked at each other like we blew our chance to write with Shawn. He came back in and I was noddling around on the guitar. He asked, ‘What do you have there?’ and I said, ‘Nothing, it’s just something coming to me’.” And we wrote a song called, ‘Something Comin’ to Me’.” What a master that guy is. We can’t help but improve as writers being around guys like him.

How do you view the current state of the bluegrass scene?

I think bluegrass could benefit from the popularity that having the most popular band in the land (Mumford & Sons) has a banjo. We shouldn’t be close-minded if young people come to acoustic music through that way. I hope I’m not shooting myself in the foot and making anyone mad here. I’m just saying I think we have to mix it up. We want the young folks hopefully to come to bluegrass, to come to Bill Monroe. And you’re hearing this from a guy whose favorite bluegrass is hardcore bluegrass. I still love the old stuff the best. If I want to listen to bluegrass, I crank Jimmy Martin, but I think we have to be more inclusive as a genre for this to grow.

What should fans expect from the Gibson Brothers this year on tour?

We’ll definitely lean on this album pretty hard. We made a record that is really fun to play, but we will also be mixing favorites and, of course, we always try to honor as many requests as possible.

We don’t even know what we are going to play ‘til we are heading on the stage. We’ve always prided ourselves on doing a different show every night. One woman last year went to 17 shows and I want her to see 17 different shows. We play songs on stage that we never record. I want to keep it fresh for us and the audience. We’ve always tried to make it about the music. We have never been the best people in the world about marketing us. I’m proud of my band and what we have done.