My series of memoirs on the Dayton Bluegrass Reunion closes with a gallery of snapshots taken during the day’s proceedings. I had a new Japanese automatic camera of the type then described as “point and shoot,” an Olympus Quick Shooter Zoom.

I returned home with a 25-shot 35mm film roll and immediately sent it to a budget speed processing outfit in Seattle. The prints returned (along with a new roll of film and a mailer) a few weeks later.

Unlike today, when you can monitor photos on your digital camera after every snap, in 1989 you had to wait for the prints to arrive to see what came out and what didn’t. Here’s what came out. 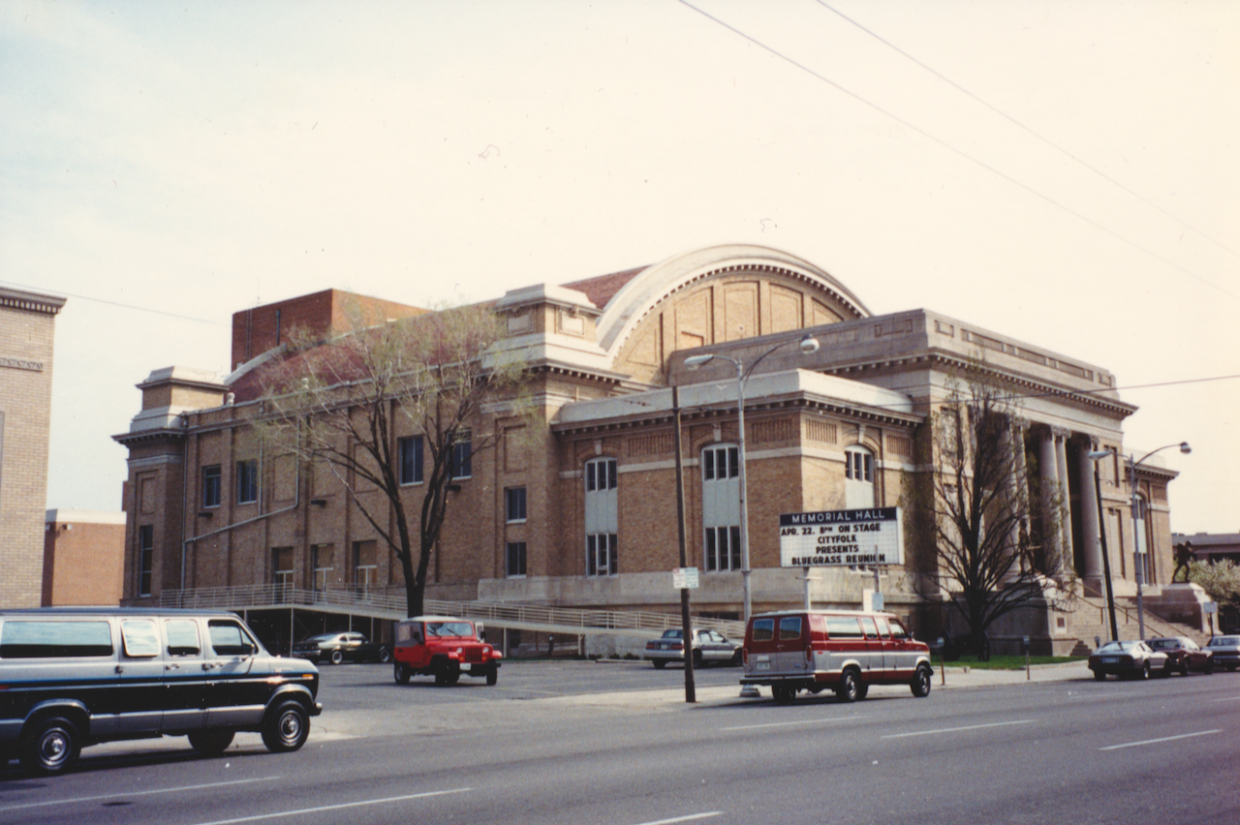 I started outside the concert site, Memorial Hall, in the afternoon before the concert — sound checks were going on inside — taking care to get a close shot of the Hall’s sign on one of Dayton’s busiest streets. 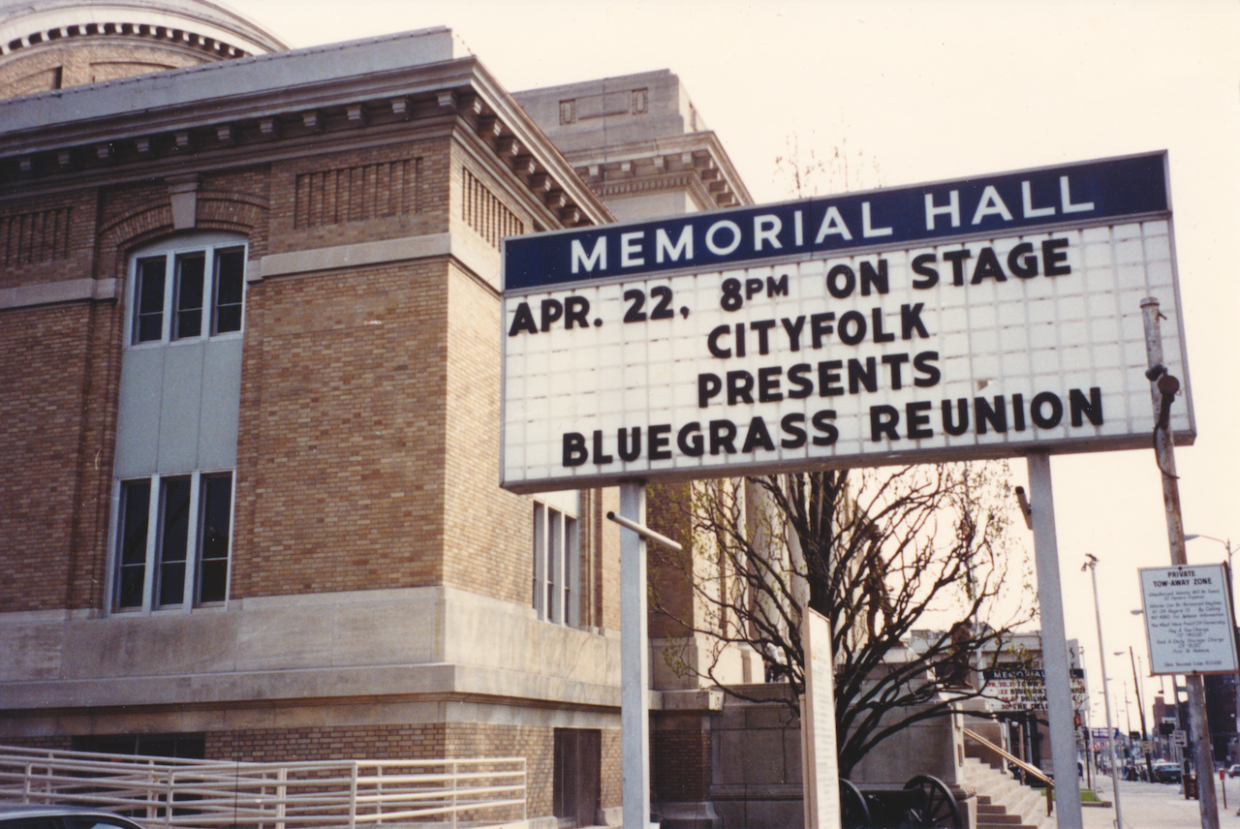 Inside the hall that day, the stage was being set. Working as a stagehand, I helped handle communications between director Don Baker and the evening’s performers. Moon Mullins and The Traditional Grass and the Osborne Brothers were parked outside in their own vehicles. I first visited Moon and the band in an RV with the name, “The Cabin,” on the door. He introduced me to the band members, including his son Joe. Then I visited the Osbornes. 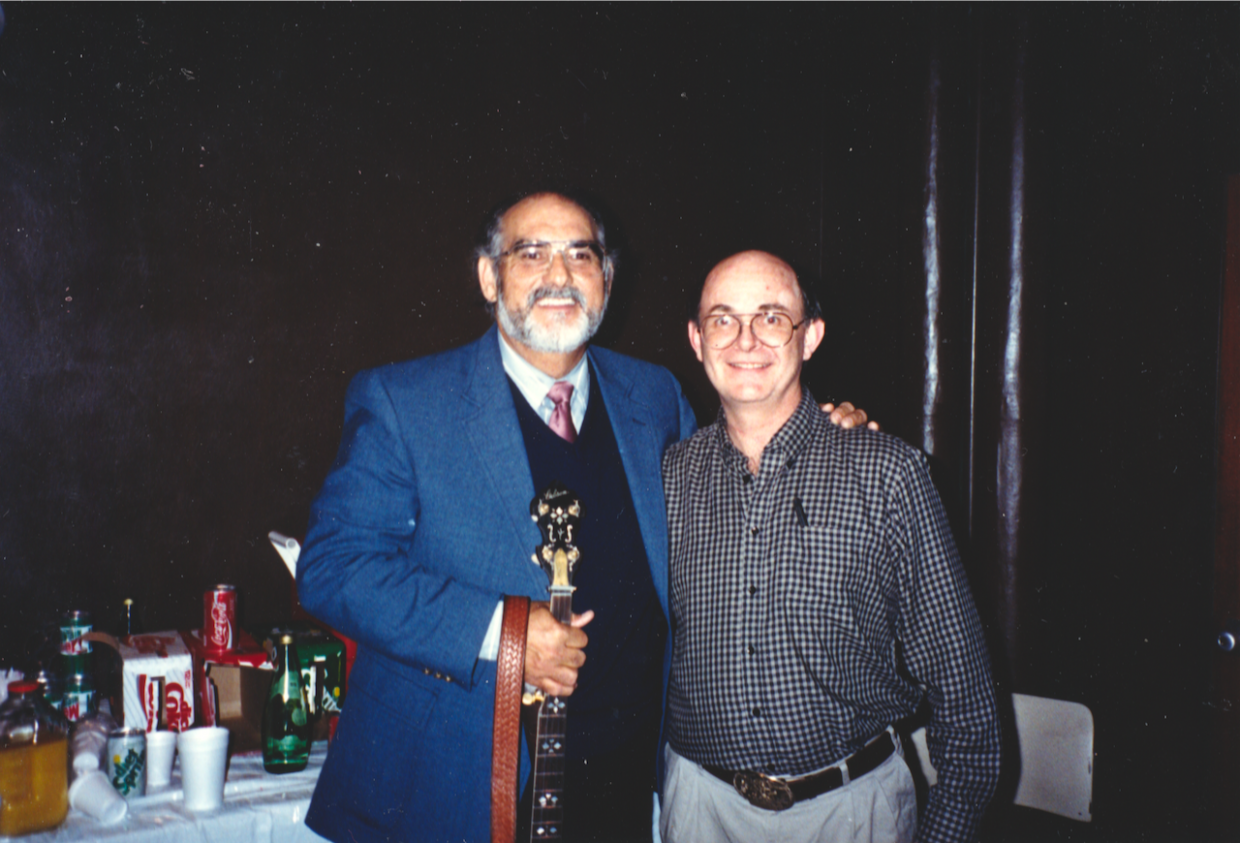 I hadn’t seen the Osborne Brothers since a Saturday night three years before when I was in Nashville to promote my new book, Bluegrass: A History. They’d invited me to be their guest backstage at the Grand Ole Opry, where Sonny brought me onstage, introduced me and spoke about the book — a very generous act. During the concert I asked a fellow backstage bystander to take our photo. Born in 1937, Sonny passed away last fall; he is sadly missed. 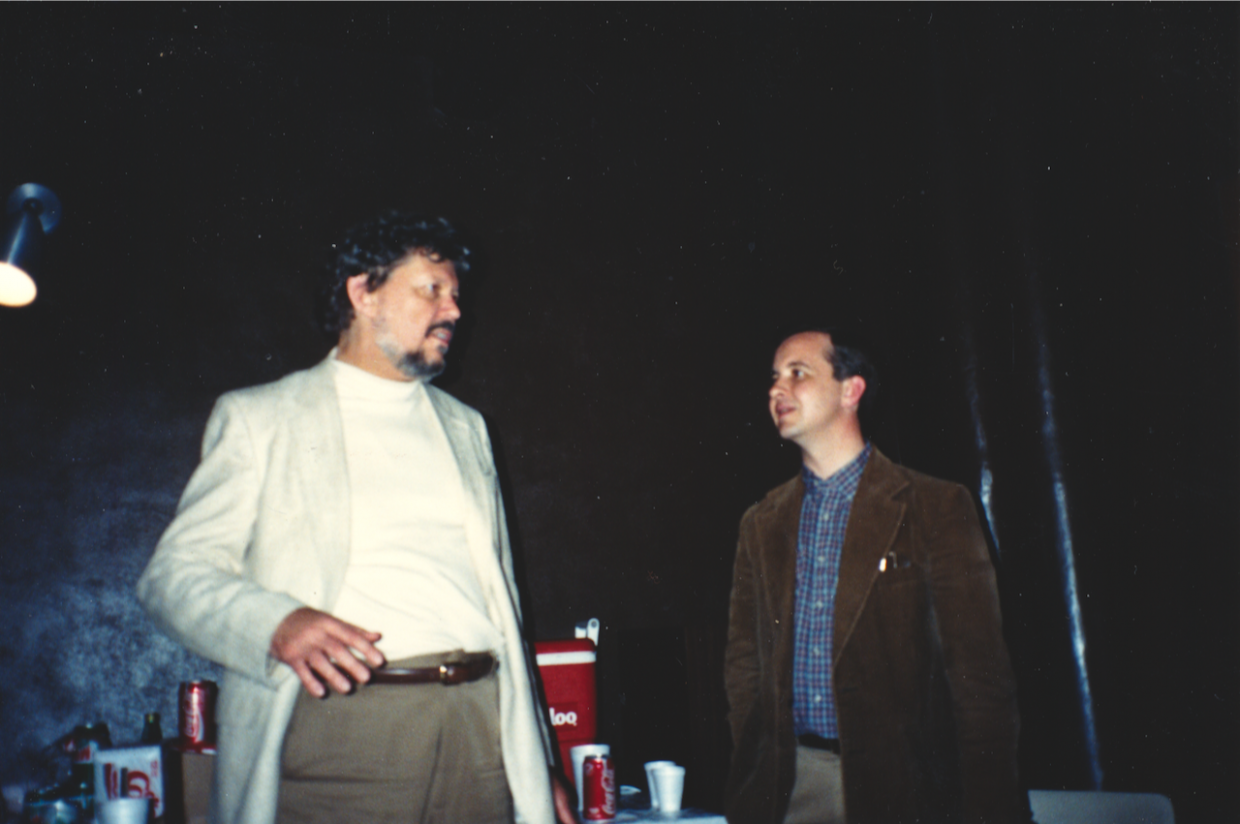 At about the same time I noticed Fred Bartenstein and Tom Teepen nearby and asked them to pose for me. They were important figures in the discovery and revival of Dayton’s bluegrass scene. Recently, I sent this photo to Fred (original editor of Muleskinner News) and asked him for a caption:

National editorial correspondent Tom Teepen (1935-2017, left) wrote an evocative memoir in the concert program about his days as a Dayton bluegrass fan. Here he meets backstage with Fred Bartenstein, who helped plan and organize the event.

The rest of my photos were taken at the Canal Street Tavern after the concert. 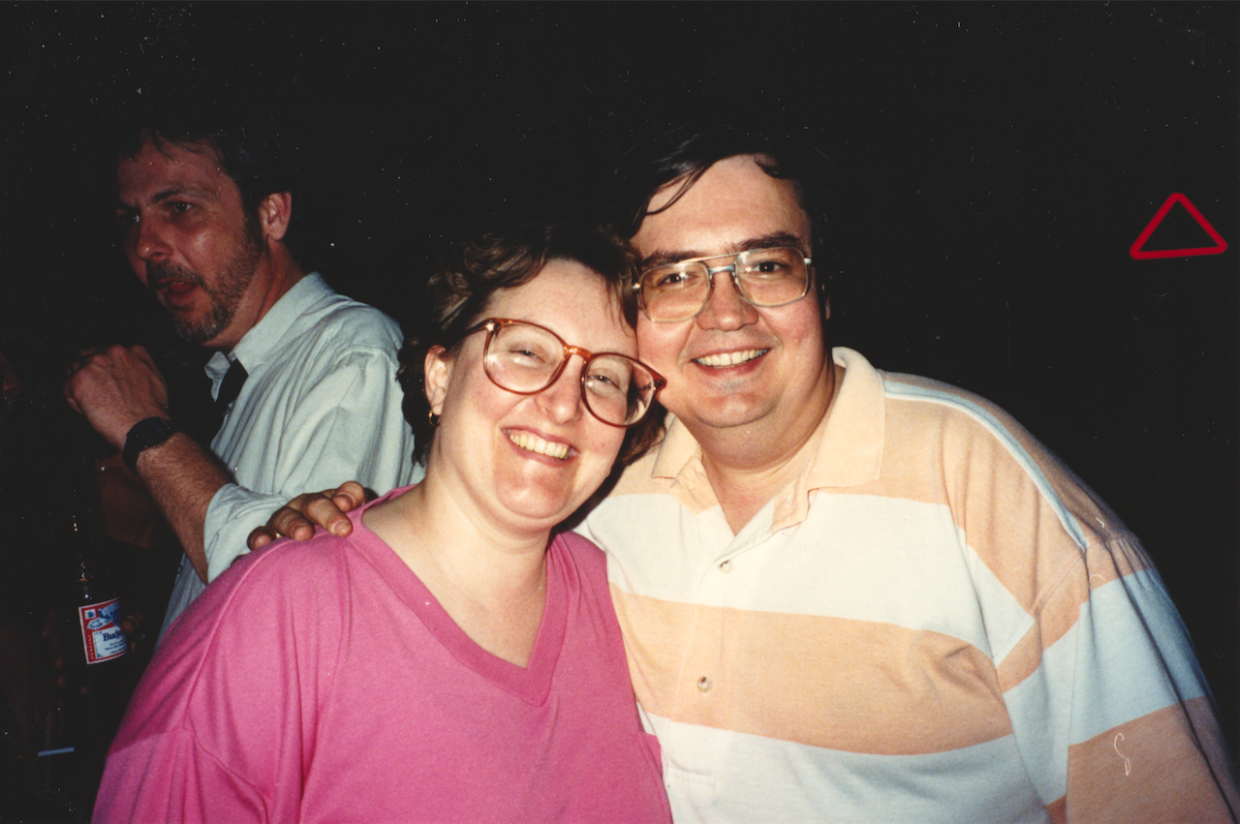 The executive producer of the event, Phyllis Brzozowska ran CityFolk from the start until its end about ten years ago. Behind her on the left is Greg Allen of the Allen Brothers. The individual on the right was one of the crew that director Don Baker enlisted from his Lime Kiln Theater troupe to help backstage. 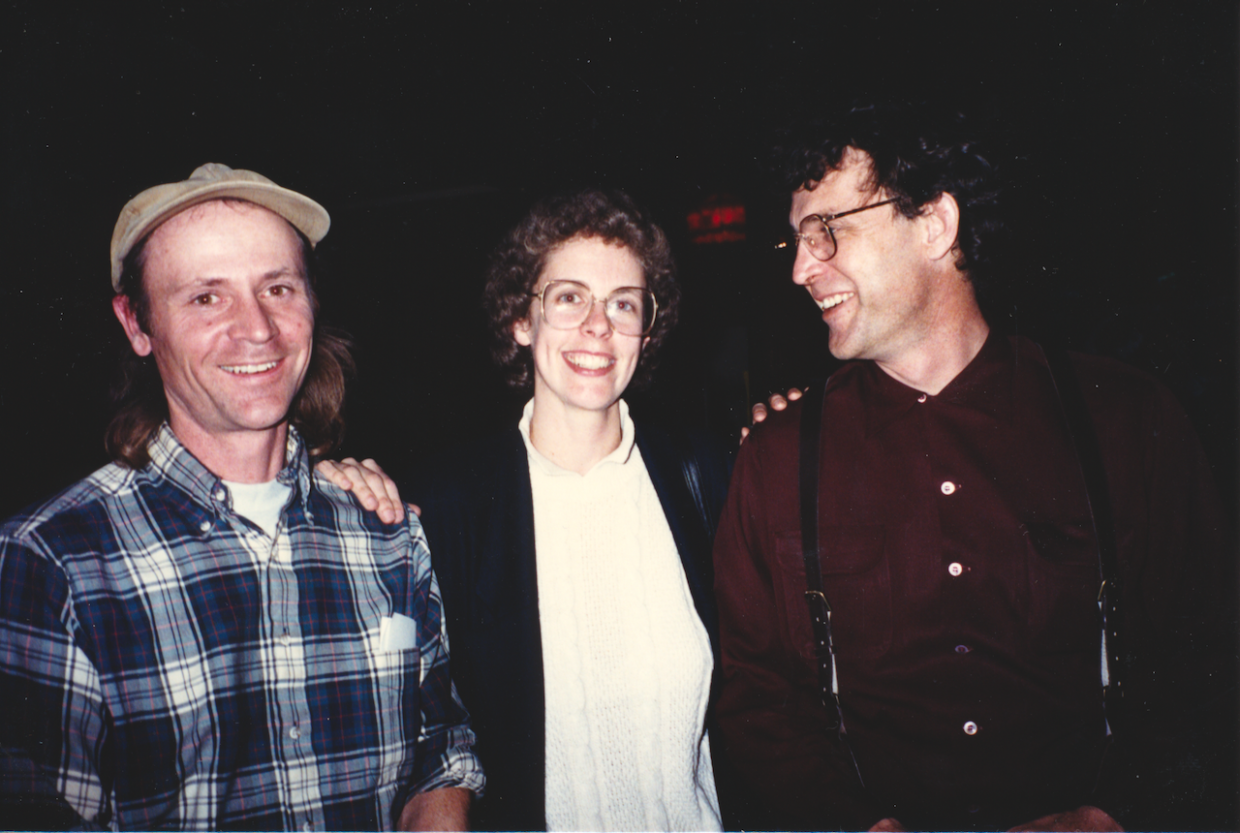 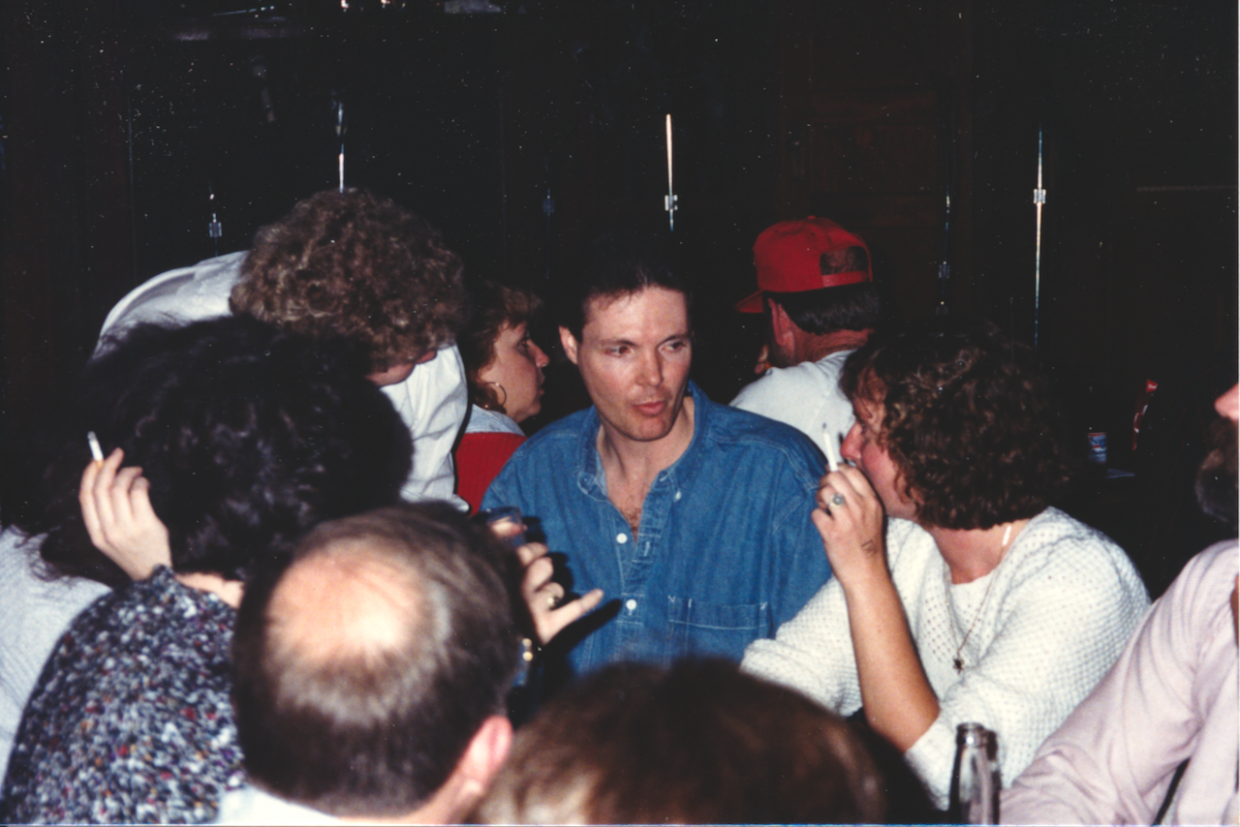 Harley Allen, a veteran star of several bands, had performed in the concert with his brothers. At the center of Canal Street’s evening’s activities, he’s seen here surrounded by friends. 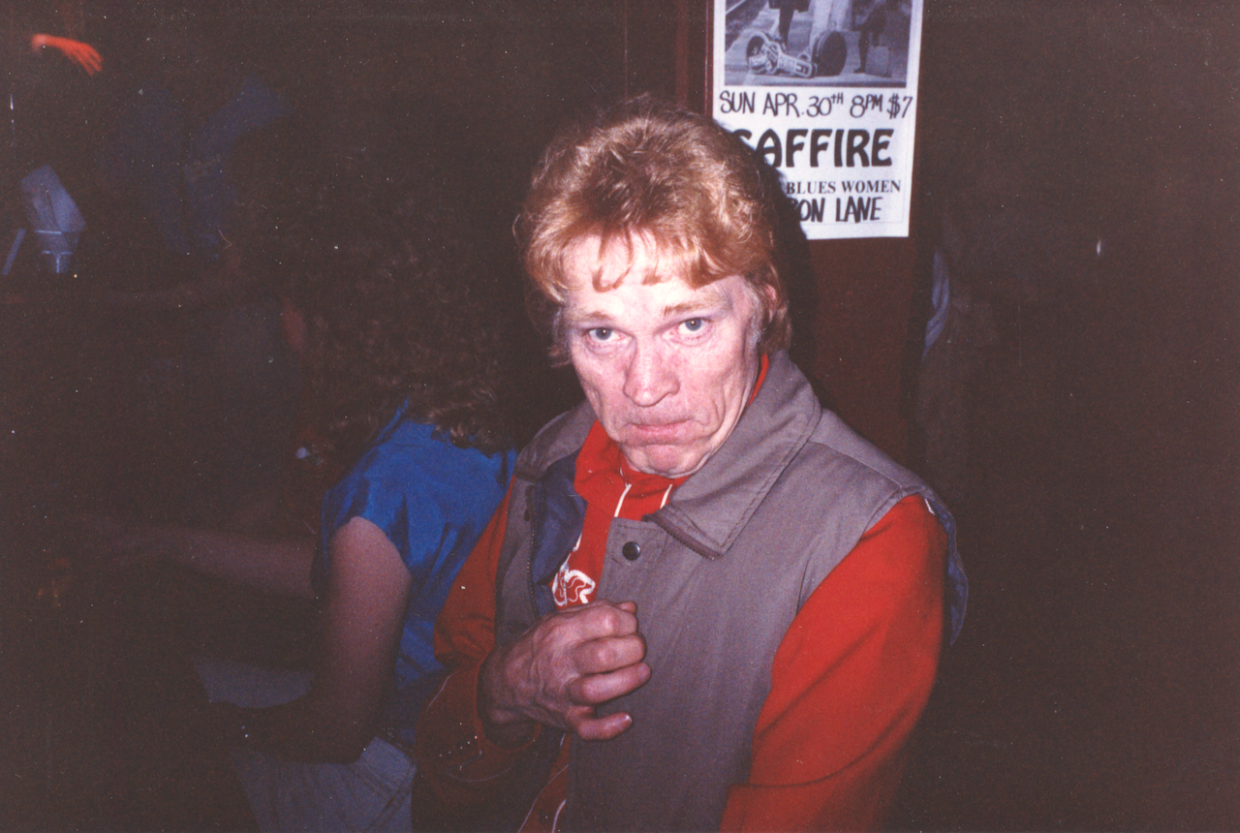 The peripatetic mandolin virtuoso, Frank Wakefield, then living in Saratoga Springs, New York, and working with a Cleveland-based bluegrass/swing outfit, was bouncing around the room. I’d first seen him in action onstage in 1962 (Bluegrass Generation, 124-25); he was still up to his onstage hijinks. 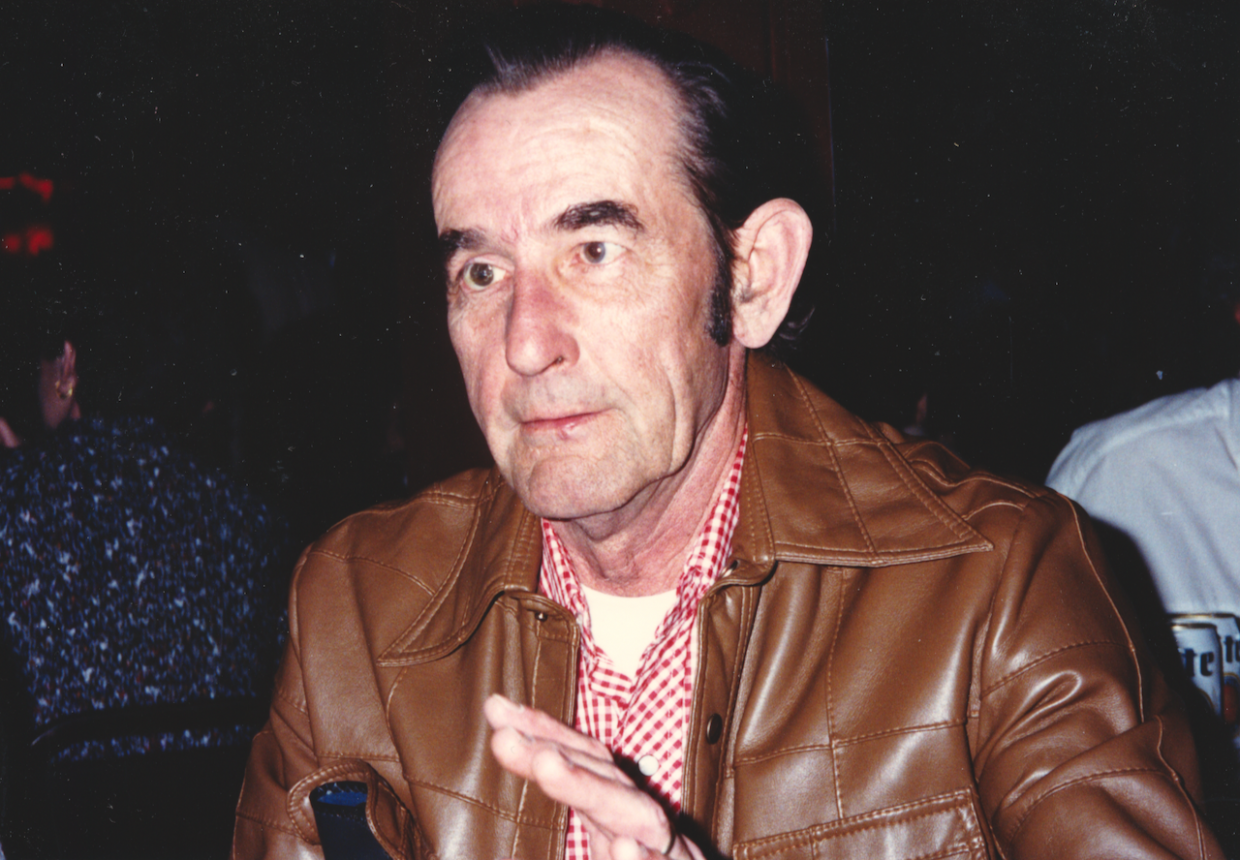 Meeting Noah Crase was a special treat. I’d first heard his music in the late ’50s on an obscure 45 record by Dave Woolum. The evening’s program included a picture of him playing with Bill Monroe along with two men I’d played with in Indiana myself, Roger Smith and Vernon McQueen. We swapped Blue Grass Boys stories. 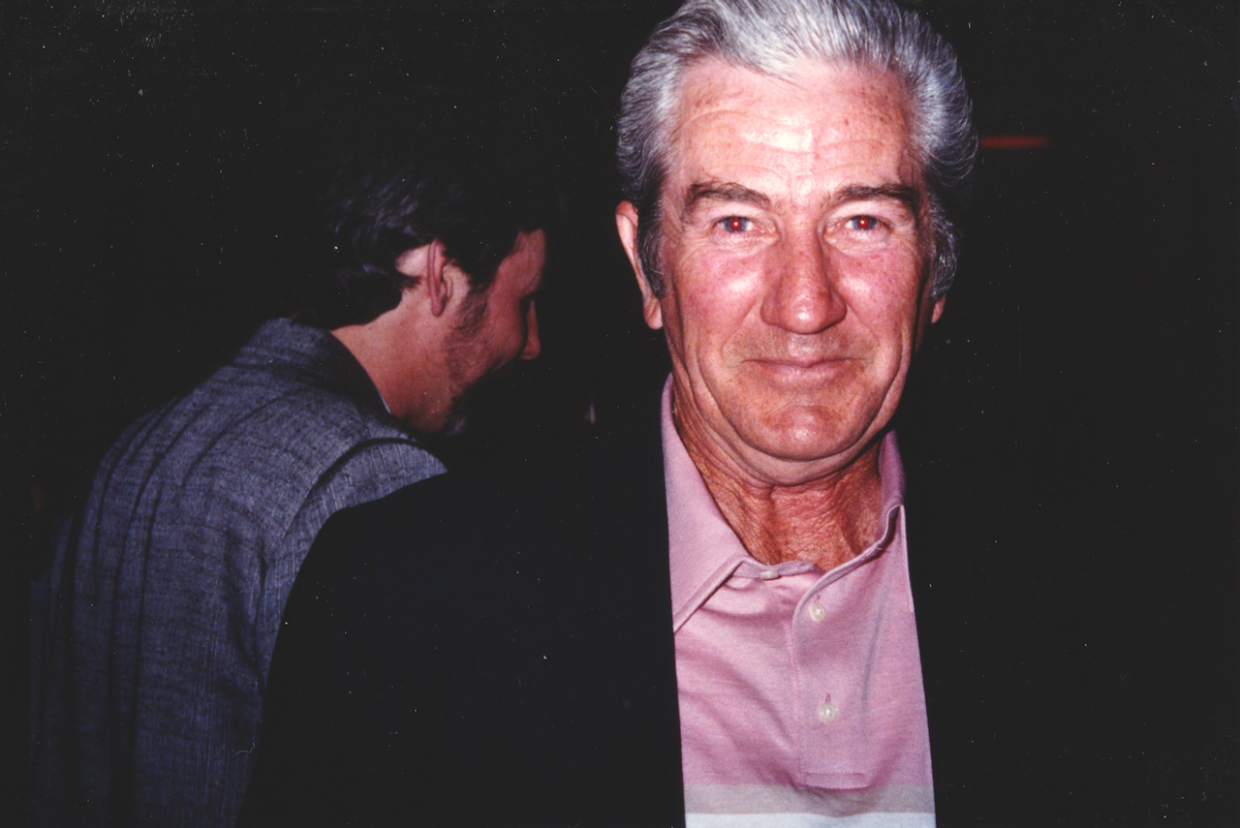 Another special treat. I first ran across Porter Church’s recordings on Red Allen’s County LPs from the mid-’60s. He was well-known in the D.C./Baltimore area, but I didn’t get a chance to see him in action until the Reunion. 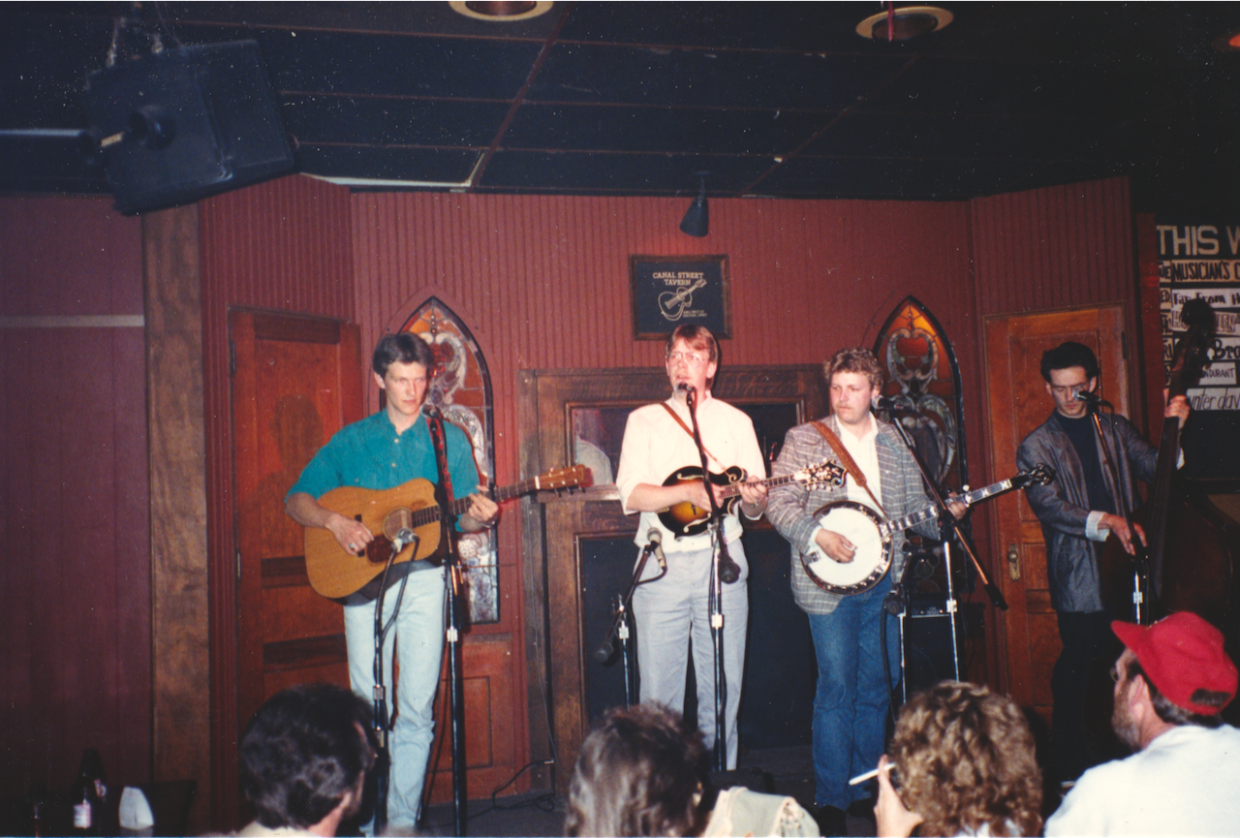 I didn’t take notes about my snapshots — all that remained in my memory of this group was that these young men were from Germany, played bluegrass gospel, and were on their first American tour. I sent a copy to Mark Stoffel, mandolin player with Chris Jones and the Night Drivers, who’s from Germany. He told me he “knew them well,” and sent the band’s name and contact information.

I wrote to banjoist Thilo Hain and asked him to describe the circumstances that brought the band to Dayton that evening, and their experiences at the concert and the reception. He explained:

In 1988 his brother Sam Hain saw an ad in New York instrument dealer Harry West‘s sales list for a 1922 Gibson Lloyd Loar once owned by Pee Wee Lambert and now owned by Frank Wakefield. Sam, interested, “rang Frank Wakefield up to ask him more details about this instrument.” Wakefield told Sam, “Better get that mandolin, before anybody else gets it.”

Sam then asked Frank if he was planning a reunion with Red Allen and his band. Wakefield told him about the Dayton Bluegrass Reunion scheduled for April 1989. Thilo remembered, “Frank finished with the words, ‘You better be there!'”

Sam missed out on getting the mandolin, but the band was there in Dayton for the concert. Red Allen arranged for their free admittance and took them backstage to “a meet and greet with all the musicians,” and suggested they perform at Canal Street. “Dee Sparks,” said Thilo, “was so kind to let Alfred play his bass for the show. Throughout our first U.S. tour we earned so many friendly comments, felt heartwarming hospitality from all the great musicians we visited at their homes and went back to Germany with a huge bag full of new impressions and experiences.”

A Google translation of the band’s history on their Facebook page reads: “Sacred Sounds Of Grass is the oldest active Bluegrass Band in Germany, founded in 1979. With their classic Bluegrass Sound the group is also considered the most authentic bluegrass band outside of the USA.”

Thirty-two years after their Canal Street Tavern performance, the same band lineup appears in a photo, also posted at their Facebook page, of them performing in a church in Adelberg, Germany this past August. Here’s a recording from a 2019 festival.

Wild & Blue (below) was mandolinist and fiddler David Harvey’s new band, formed November 1988. On this night, when they came onto the Canal Street stage, David had already played with the Allen Brothers. Born 1958 in Dayton and son of famous mandolin player Dorsey Harvey (1935-1988; see Industrial Strength Bluegrass pp. 150, 183), he’d grown up in Parkside, a postwar housing development, together with Red Allen‘s four sons as neighbors. Their fathers both played in bluegrass bands — they all learned at home, jamming together after school as teens. By summer 1972 David was playing festivals with Red Allen. 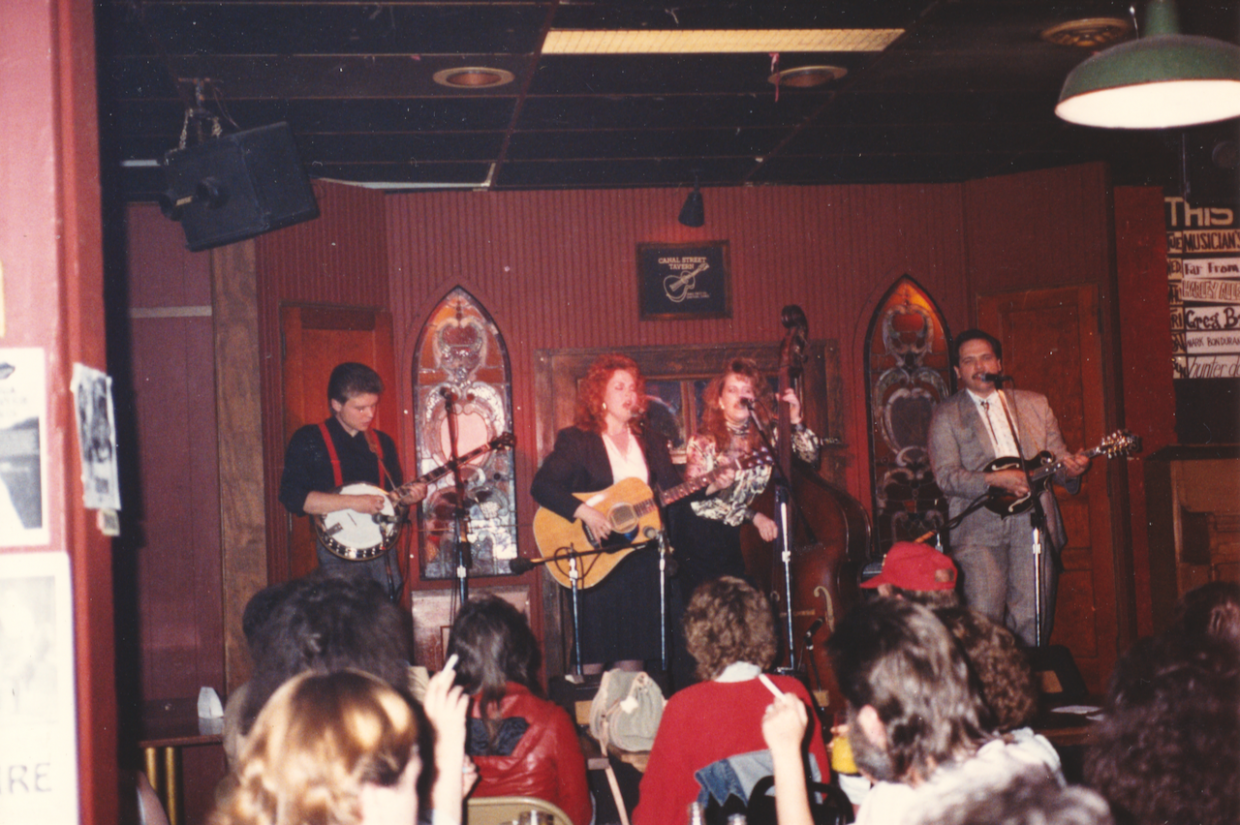 In 1974, at 17, Harvey dropped out of high school to help support the family as a professional musician, joining the Falls City Ramblers. Parkside was a decaying, crime-ridden, rustbelt housing project; David saw music as a way to a better life.

A Louisville-based band that played a lot in Southwest Ohio, the Ramblers were local favorites with the same crowds who listened to the Hotmud Family’s eclectic blend of bluegrass, old-time, blues and early county. The chapter “Beck Gentry” in Murphy Hicks Henry’s Pretty Good for a Girl: Women In Bluegrass (pp. 186-191) gives a good history of the band. David was with them, playing fiddle and mandolin, for five years. In 1977 Kentucky Educational Television aired one of their shows:

In 1979 Harvey moved to Colorado Springs, where his musical career continued in a group called The Reasonable Band. He entered and won several mandolin contests, establishing an enduring reputation for his skill and creativity. He also began working as a luthier.

He moved to Indianapolis in 1983 and for the next four and a half years he played on the road and recorded with Larry Sparks. His career as a luthier grew. In 1986 he met Jan Snider, who, with her younger sister Jill, had been playing bluegrass. Jan and David soon wed.

Wild & Blue brought lead singer Jan’s voice to the forefront, solo and in duets with Jill’s high harmonies. They began around the same time as a number of other bluegrass bands with female lead singers were coming on the scene like Alison Krauss, Lynn Morris, and Laurie Lewis. The band had a lot of energy, with David’s suave mandolin work and its female-dominated trios. They won the band contest at SPBGMA 1992 and moved to Nashville in 1995. By then they’d recorded albums for Vetco and Pinecastle. Wild & Blue lasted until 1999.

Harvey then worked with Larry Cordle (1999-2001), Claire Lynch (2002-07), and Harley Allen (2008-11). Meanwhile his luthier work in Nashville blossomed. He joined Gibson in 2004 and today as Master Luthier heads Gibson’s Original Acoustic Instruments division. Here’s a video (above) in which Dave introduces one of the mandolins he’s building and illustrates it with a tune he co-wrote with his dad, “Cruising Timber.” 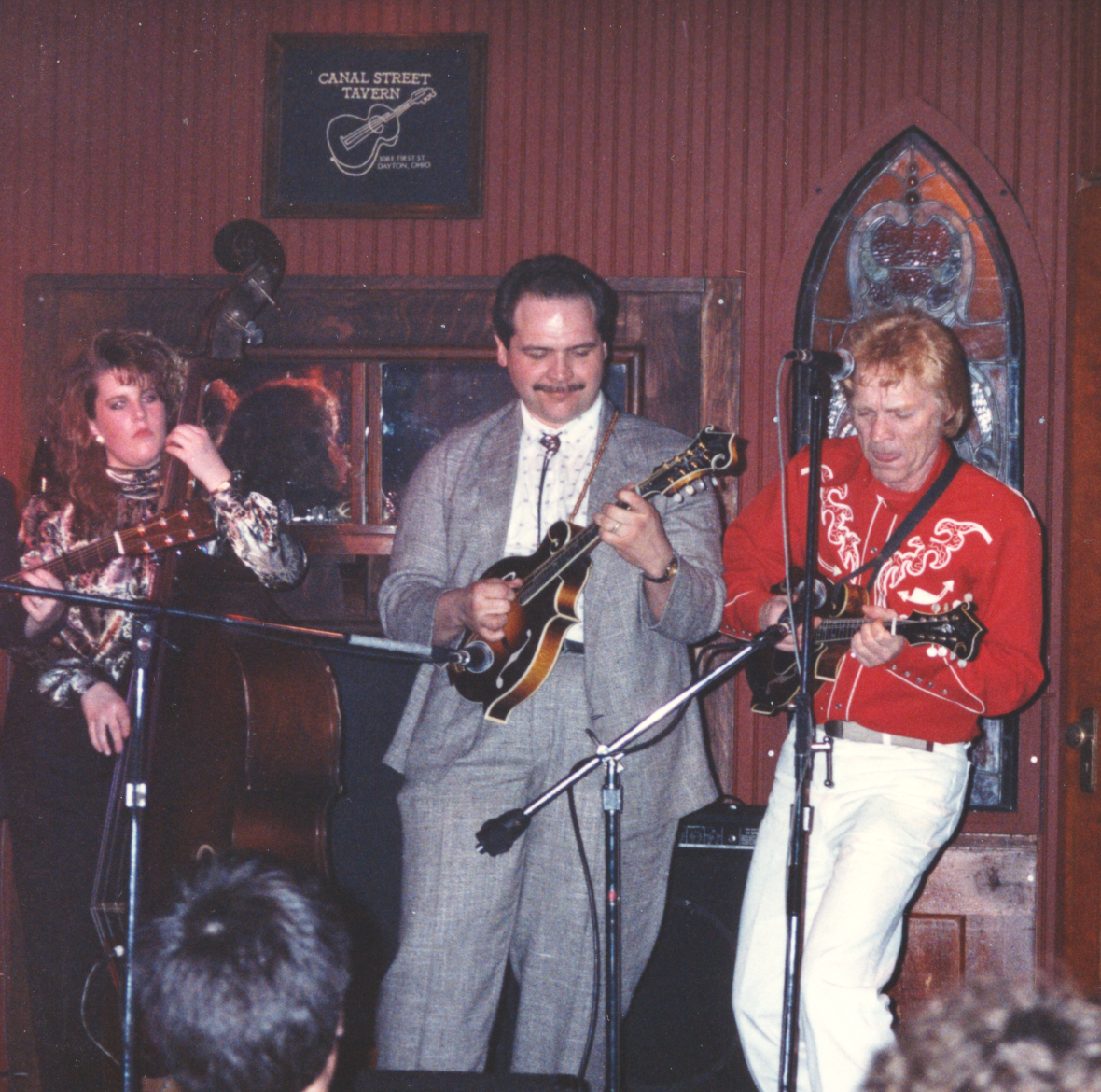 As a small boy Harvey had watched and listened to his father and Frank Wakefield as they wrung out mandolin ideas at his home. He clearly enjoyed himself with Frank this evening. 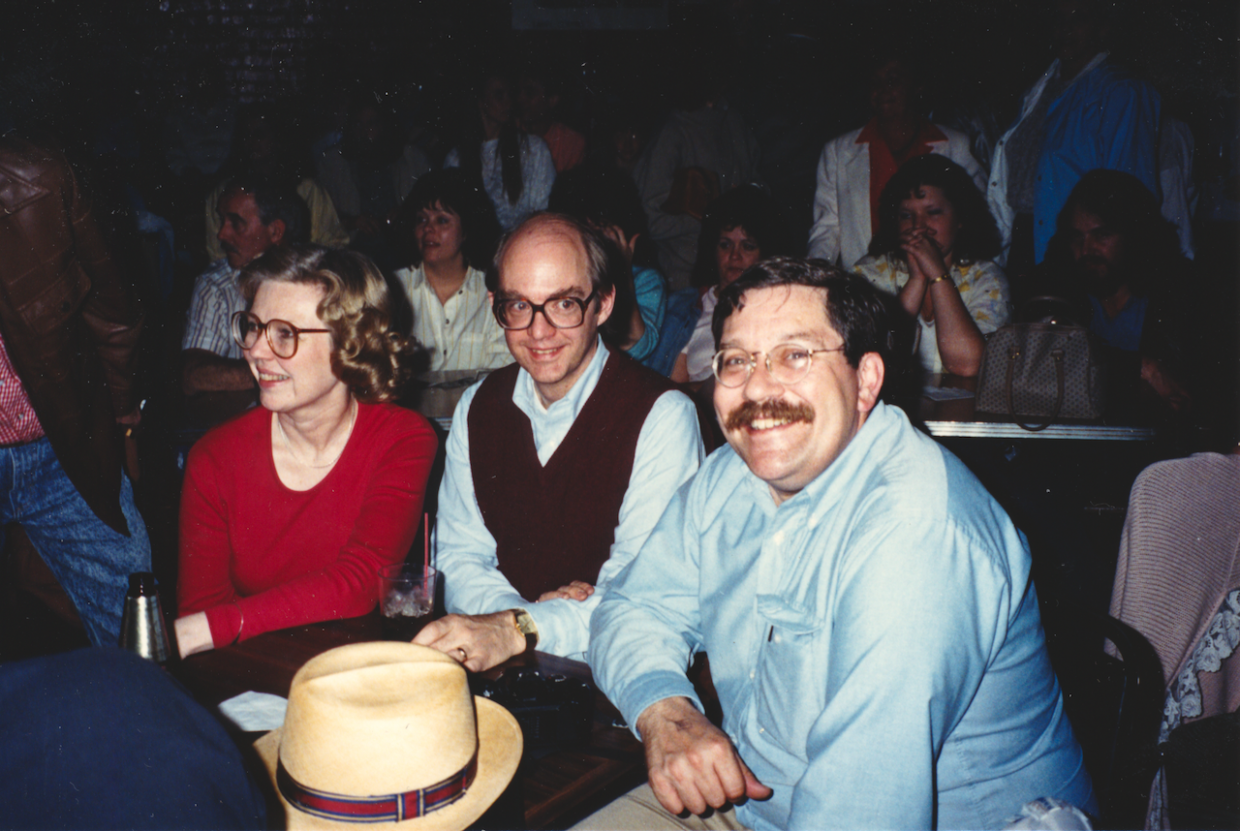 I had watched the evening’s afterparty at Canal Street with old friends from Lexington, Kentucky: the late Marty Godbey, author of Crowe On The Banjo: The Musical Life of J.D. Crowe. Next to her, husband, writer, photographer and musician Frank Godbey, creator of two influential bluegrass digital lists, BGRASS-L and IBMA-L. Next to Frank is Tom Adler, folklorist, banjoist and author of Bean Blossom: The Brown County Jamboree and Bill Monroe’s Bluegrass Festivals. And that’s my hat on the table.