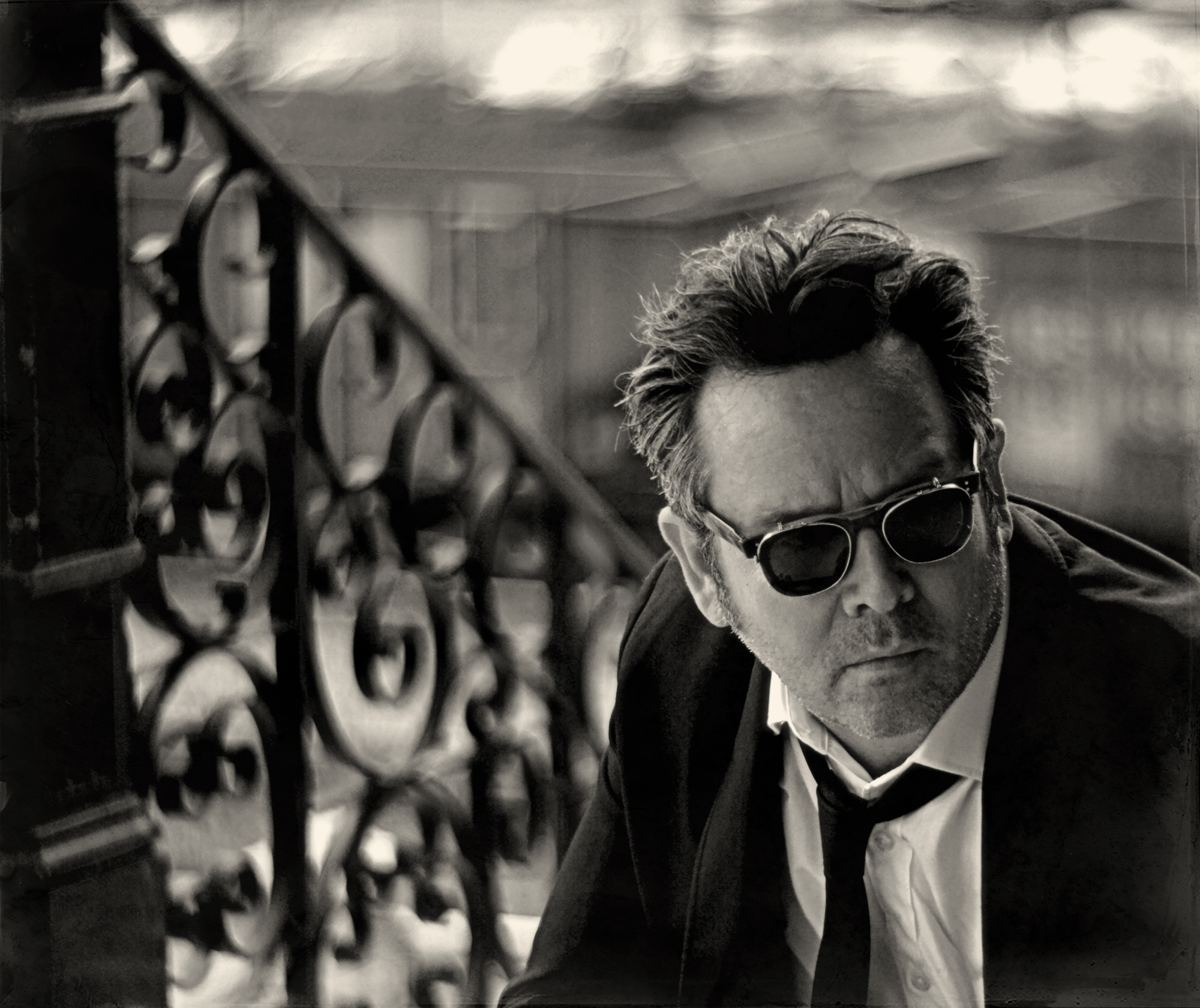 With me today in the Writers’ Rooms at the Hutton … Grant-Lee Phillips!

Good to be here! This is a nice little cozy shack you got here.

Yeah, out a week now.

Tell me if I’m getting this right: To me, this record is you reflecting back your experience of the current sociopolitical times in song form.

Yeah, it just kind of barreled out of you.

Yeah, I mean sometimes I take my time, but sometimes you have to just get out of the way.

Well, the album opens with “Walk in Circles” and, in that tune, you sort of tick off all the people you’d rather … not make them mad, but …

[Laughs] I’m sometimes smarter than I know! But you sort of list all these people that you’d rather be hangin’ with than the “righteous goons” which aren’t actually righteous — they’re self-righteous and greedy.

And then you proclaim that “You’d rather go down fighting for the water than start another war for oil.” Does that sort of sum up this moment for you, where you are in your life?

I think that’s a big part of it. It’s kind of like we’ve built our house on these sticks on the side of a hill and now the earth is shaking, and we ask ourselves “How do we deal with this? Do we add more sticks? Or maybe we have to rethink a whole lot of things in our life,” you know? Yeah, that’s the idea. I’d rather side with nature and those who move in accordance with nature. Maybe they walk counter-clockwise. Sometimes some of the old ways have their wisdom.

Oh, more often than not.

Yeah, when folks had no choice but to live in accordance with the earth and the stars and the animals.

There was an article circulating last year about how you can’t teach empathy. That’s something that you kind of have to have. And it seems like there’s a whole population of people who just don’t have that in them, and I don’t know how you teach somebody to care?

I’m not certain. I’ve seen such ugliness in the last week or so, in the wake of this horrible tragedy in Florida, and the ideas that have been floated out there, trying to take the wind out of the sails of these kids who have been through hell. And that’s a hard thing to understand, really, where one would come from. But I don’t know. I suspect that a lot of times, if we could sit down face-to-face, maybe we would have a different kind of discourse than we do online, where we’re just sort of hurling these Molotov cocktails at one another.

With some level of anonymity.

Right, we can run back and Google and get our stats together, and hurl another one.

You mentioned the shooting in Florida, and I do feel like this all-too-common experience that we’re having lately … your song “Totally You Gunslinger,” my interpretation of that song is you shining a light on what’s underneath someone’s need to be armed, whether it’s an ICE agent with a Rambo complex or a teen with social anxiety or whatever it is. And maybe I’m reading too much into it, but I’m gonna give you credit for this. I do feel that what’s underneath that is the toxic masculinity idea that is at the core of the violence, whether it’s rape culture or gun culture or whatever.

Yeah, I think you’re hitting it on the head there. Maybe this is a symptom of a culture where people feel fearful and powerless, you know? Where maybe your masculinity itself isn’t enough, you know?

Or what your idea of masculinity is.

Yeah, all of that. And these things are so easily exploited — our fear of the other, where we’re turned against one another so easily. We find ourselves scapegoating the immigrant or some branch of government, maybe they’re to blame. We’re always looking for the blame.

Do you feel like it’s enough to simply shine a light on those darker corners? Do we need to transform them, even a matter of degrees, and can a song do that?

I think what the role of a song is and the role of a songwriter, it’s like a tea kettle. When the conditions are such where the water comes to a rolling boil, and things are really intensified, then we whistle, we sing. We’re a symptom of that. “Wake up, you’ve got a fire on the stove!” [Laughs] But sometimes it’s the kind of thing where it will play its role in affecting change. I don’t think by itself it can. It’s just part of the human mechanism, you know? Shout out, sing out.

And serve as a connecting point.

Yeah, that’s right. I would hope that you would listen to some of these songs and maybe you see yourself or hear your own questions. You don’t feel so alone, maybe, that you’re the only person who has these crazy thoughts. There’s two of us. [Laughs]

One of the things that I think is a major part of this record, both in the writing and the making of it, is being fully present, in and to the moment, right? Do you feel like part of what we’re being tasked with right now is being fully present to history unfolding in a bigger way than we’re used to? A much more dangerous way?

Well, they’re perilous times right now. I read that you were saying this [era], to you, echoes the early ‘90s and that time — in your career but also in the world. There was a war going on, and all sorts of stuff.

I think for me maybe the age I was — I was in my later 20s then — and waking up to, kind of late really, everything that was going on and wanting to express it and make sense of it. That’s the stuff that was on my mind more than anything. There have been artists that have really inspired me for years — Billy Bragg, for instance, R.E.M., as well — artists who can talk about the moment but also reflect the feeling of that moment, as well. It’s not a diatribe. It’s presenting this whole basket of parts that you can put together yourself.

I feel like you’ve done that with this record.

That’s what I’m hoping for.