Take This Hammer, Blow Your Kazoo: Skiffle in the 1950s and Beyond 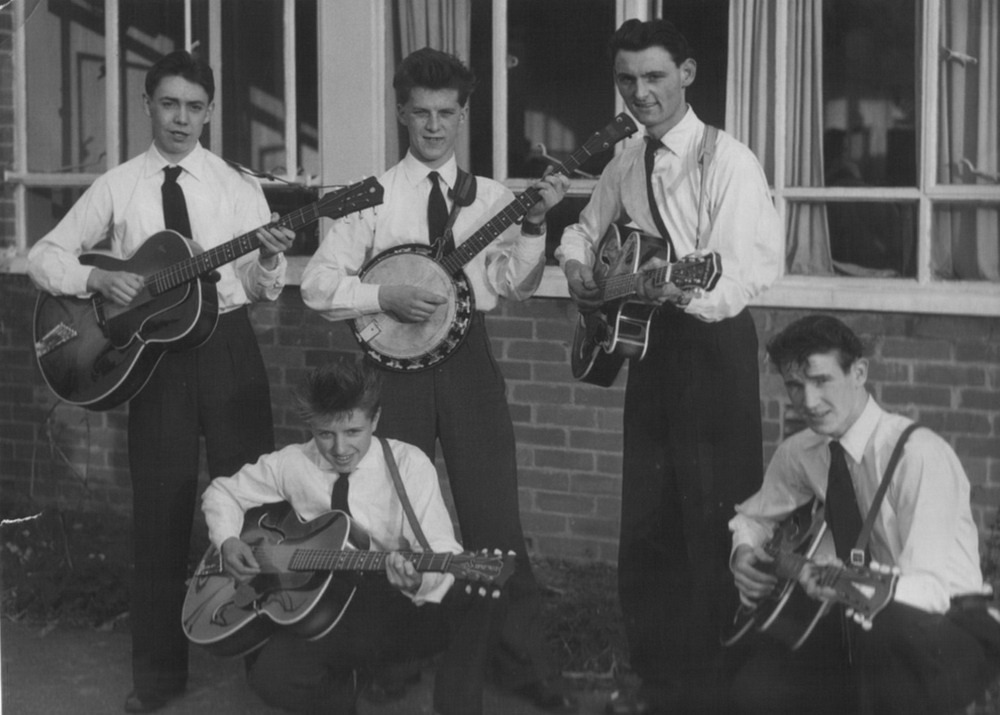 In July, 1954 — the same month that Elvis Presley unleashed his first two world-changing singles — a Scottish-born singer and trad-jazz musician named Lonnie Donegan released a cover of “Rock Island Line” with backing on washboard and bass. Inspired by the African-American singer Lead Belly, Donegan explains the rules of the rails in his spoken-word intro and includes the shouts and cries of the engineers. Though he strums his guitar in a persistent rhythm to evoke the chug and drive of a freight train, the song picks up speed along the way, finally achieving a breakneck momentum as Donegan’s high-pitched vocals grow wilder. It’s a remarkable performance, studious to the point of mimicry, yet reckless like a runaway train.

It took two years, but the single finally caught on and started climbing the British pop charts in 1956. Donegan followed it up with a full-length album, An Englishman Sings American Folk Songs, which became a massive hit on both sides of the Atlantic. In its wake, a series of like-minded folk acts starting popping up all over Britain: young men and women well-schooled in American folk music yet too irreverent and too wiley to be classified as traditional. Emphasizing ingenuity and spontaneity, they played rhythm guitar almost exclusively, along with whatever instruments happened to be on hand: usually kazoos, banjos, washboards, tea cabinet bass, and assorted homemade noisemakers. This was closer in spirit, if not in sound, to the rock 'n' roll coming out of the American South.

Thus was born skiffle, a short-lived scene with a lasting influence.

The word itself has a long history that reveals the concerns of its mid-century practitioners. Skiffle originated in the 1920s as a word to describe wild, impromptu jazz that mixed blues, ragtime, and folk. When Donegan and a few other musicians began playing sets of folk tunes during their trad-jazz shows, he called them “skiffle breaks,” borrowing the term from the semi-popular ‘30s jazz act the Dan Burley Skiffle Group. Eventually, the break would become the entire show, with Donegan and his small outfit often improvising their covers.

After the success of “Rock Island Line,” skiffle groups came out of the woodwork, with trad-jazz musicians migrating to this more lucrative market and kids picking up guitars for the first time. The Chas McDevitt Skiffle Group enjoyed a hit with a cover of Elizabeth Cotton’s “Freight Train” featuring Nancy Whiskey on vocals. A London outfit called the Vipers Skiffle Group — later known as simply the Vipers — rivaled Donegan as the trend’s guiding light, thanks to a string of smash singles like “Cumberland Gap” and “Don’t You Rock Me, Daddy-O” (which was produced by George Martin, later known as the Fifth Beatle). America even produced its own skiffle star, Johnny Duncan, who was born in Oliver Springs, Tennessee, but found fame in the clubs and charts of England with his 1957 hit “Last Train to San Fernando.”

As Rob Young writes in his indispensible 2010 guide to British folk music, Electric Eden: Unearthing Britain’s Visionary Music, “Skiffle’s accelerated swing rhythms and domestic equipment — kazoos, harmonicas, comb and paper — placed music-making in the hands of the amateur, as well as opening up a conduit for the dust-bowl and rust-belt blues and folk poetry of Woody Guthrie and Lead Belly to be siphoned into British ears.”

Like the trad-jazz scene and like the blues revival of the following decade, skiffle was a result of Britain’s obsession with American traditional music. During the post-war years, even as many musicians strove to define and preserve a specifically English folk tradition in pubs and social clubs, much of the country looked west for musical inspiration, finding it in the music made by poor Americans often in rural settings. Granted, those folk songs could be traced back to European sources, brought over by immigrants generations before and gradually mutated over the years, but by the middle of the 20th century, the music sounded distinctly American.

What distinguishes skiffle from imported jazz or blues is its emphasis on labor and class. Most of the main skiffle hits were about workers’ laments: engineers and linemen, sharecroppers and cotton pickers, migrants and chain gang prisoners. Weirdly, skiffle was viewed as largely apolitical at the time, a harmless fascination with another country’s past. However, the subject matter of these songs reinforces the populism that lies at the heart of all folk music, which likely made it more appealing to everyday Brits, especially teenagers.

As Alan Lomax noted at the time, “At first, it seemed very strange to me to hear these songs, which I had recorded from convicts in the prisons of the South, coming out of the mouths of young men who had suffered, comparatively speaking, so little. But I soon realized that these young people felt themselves to be in a prison — composed of class-and-caste lines, the shrinking British empire, the dull job, the lack of money … things like these. They were shouting at the prison walls, like so many Joshuas at the walls of Jericho.”

Skiffle left a mark on an entire generation of men and women who picked up guitars and created some of the best music of the 1960s. The list of musicians who started out in skiffle is long and impressive: Jimmy Page, David Gilmour, Ritchie Blackmore, Pete Townshend … even Cliff Richard. Van Morrison was not only a huge fan of the genre, but also recorded an album with Lonnie Donegan and Chris Barber in the late 1990s. And one obscure skiffle group from Liverpool eventually changed its name from the Quarrymen to the Beatles.

The craze lasted barely five years, replaced by the screams and shouts of American rock 'n' roll, which offered similar freedoms and pleasure. Skiffle remains a brief chapter in pop history, but its lasting influence belies its short life. Although it remains obscure today — unknown by pop fans and often overlooked by folkies — the genre reinforced the idea that popular music is often best left to the amateur, the unschooled, the self-taught: those artists who innovate intuitively, without anyone telling them what they can’t do.