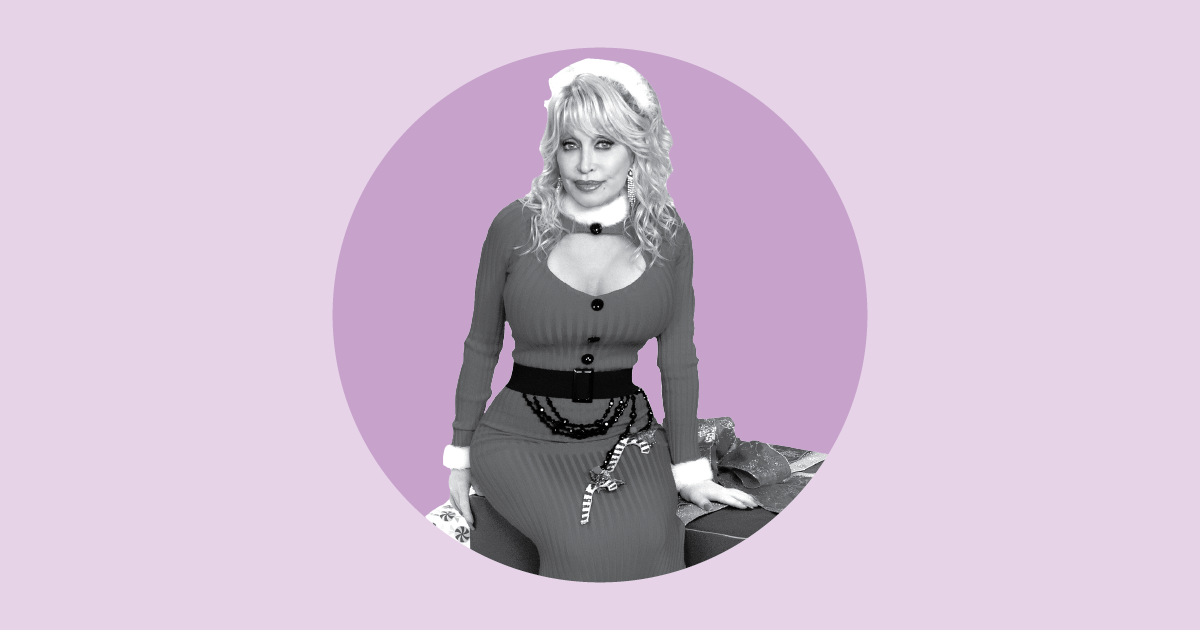 Dolly Parton kept her promise to bring good into the world in 2020 and beyond. For so many reasons, this is absolutely the Year of Dolly Parton.

Gosh, where to begin? How about…

Although it seems like a million years ago now, Dolly launched a viral craze on January 21 with a meme that went around the world. Gotta love the acoustic guitar for Instagram!

Also in January, she notched a Top 10 track on Billboard’s Hot Dance/Electronic Songs chart with “Faith,” which basically transformed the John Hiatt classic into an international EDM hit. Co-starring in the video with her musical collaborators, Galantis, Parton camps things up as the world’s best-dressed bus driver.

Later in the month, Parton collected her ninth career Grammy Award, this time in the category of Best Contemporary Christian Music Performance/Song, sharing the honor with For King and Country with “God Only Knows.” Although Parton wasn’t in attendance, the duo’s Joel Smallbone remarked from the podium, “To dear Dolly Parton, who is an incredible human being. It’s one of the great moments of our career to collaborate with her and her team.”

He continued, “I taught two of her managers in Sunday school growing up, so they were kind enough to reach out and play her the song. But she said something on a call. She said, ‘I love this song because it’s reaching to the marginalized, to the depressed, to the suicidal,’ which is all of us at some point. And then she said this, in her Dolly accent: ‘I’m going to take this song from Dollywood to Bollywood to Hollywood.’ And we did it, Dolly, we took it all the way.”

A few months into the pandemic, Parton told Instagram followers, “I think God is in this, I really do. I think he’s trying to hold us up to the light so we can see ourselves and see each other through the eyes of love. I think that when this passes, we’re all gonna be better people.”

She also revealed on social media that she’d donated a million dollars to Vanderbilt University help find a cure for the coronavirus. She wrote, “My longtime friend Dr. Naji Abumrad, who’s been involved in research at Vanderbilt for many years, informed me that they were making some exciting advancements towards research of the coronavirus for a cure. I am making a donation of $1 million to Vanderbilt towards that research and to encourage people that can afford it to make donations.”

Incredibly, when news of the Moderna vaccine emerged in November, Parton’s contribution was duly noted. “Without a doubt in my mind, her funding made the research toward the vaccine go 10 times faster than it would be without it,” Abumrad told the Washington Post.

In April, she kicked off a series of bedtime stories, told online, in order to bring comfort to children who were scared about sheltering in place. “This is something I have been wanting to do for quite a while, but the timing never felt quite right,” she said. “I think it is pretty clear that now is the time to share a story and to share some love. It is an honor for me to share the incredible talent of these authors and illustrators. They make us smile, they make us laugh and they make us think.” Two of the chosen books she wrote herself: Coat of Many Colors and I Am a Rainbow.

In addition, a new line of uplifting greeting cards inspired by Parton appeared in Walmart stores over the summer. Meanwhile, musically, she responded to the pandemic with a beacon of optimism, titled “When Life Is Good Again.” She shared the song in tandem with an interview (while sitting on her porch in her first-ever Zoom call) with the series Time100 Talks: Finding Hope.

Bluegrass fans rejoiced in August as she made a surprise announcement that six of her albums from the early 2000s were finally available on streaming services, so how about adding title tracks of Little Sparrow and Halos & Horns to your Dolly playlists? Overall, 93 once-missing tracks are now available to stream.

Although she’s rarely controversial, Parton’s commentary about Black Lives Matter caused a commotion among its supporters and detractors — and even inspired a mural in East Nashville. She told Billboard in August, “I think that everybody needs to express themselves however they feel they have to. I’m not out here to tell you what to do. I don’t want you to tell me what to do. But I just do what my heart tells me to do, I ask God to direct me and lead me, and if I’ve got his direction, I don’t have to worry too much about anything else. But I do understand people having to make themselves known and felt and seen. And of course Black lives matter. Do we think our little white asses are the only ones that matter? No! Everybody matters.”

In November, she commemorated the 25th anniversary of the Imagination Library – an incredible program she launched in 1995 in order to provide free books every month to preschool children — with a new documentary titled The Library That Dolly Built. Parton stated, “I am so excited that we can finally tell the whole story of the Imagination Library. It is certainly not just about me. Our story is the story of children, of families and communities who all share the dream to inspire kids to love to read and to love to learn. My hope is this documentary will encourage more towns, more states and even more countries to jump onboard. One thing is for sure, I think this is the best investment I have ever made.”

Those who have been fans of Dolly Parton for their whole lives were treated to two magnificent overviews in 2020. The first is a Time Life box set of her career on camera, available in two different configurations. One option for Dolly: The Ultimate Collection clocks in at 11 DVDs, and the other at 19 DVDs. Some of the most interesting footage comes from her variety shows, such as this clip of the superstar singing “Amazing Grace” with Glen Campbell (who, for some reason, has brought along his bagpipes).

The other retrospective is Songteller, a book of lyrics that doubles as a memoir. Compiled by Parton and noted journalist Robert K. Oermann, it portrays Parton as a composer whose catalog goes way deeper (and darker) than “Jolene,” “9 to 5,” and “I Will Always Love You.” Dorian Lynskey, a contributor to the L.A. Times, wrote, “Her shows are carnivals of good-natured inclusivity that unite everyone from LGBTQ millennials to MAGA-hat boomers under one roof. There is room for heartbreak but not deep cuts about suicide and arson. Still, she would not have included so many of these dramas of cruelty and suffering in Songteller if she did not believe that this harsher strain in her life and work was worth remembering. Her optimism stands on the shoulders of pain.”

And if all that isn’t enough, she gifted us with a holiday album and a network special (both titled A Holly Dolly Christmas), a Netflix movie (Christmas on the Square), and even a baking kit at Williams-Sonoma. It may be the only time in history that she’s been affiliated with the words “cookie cutter.”

Right before Thanksgiving, the iconic musician logged her 50th Grammy nomination, this time for “There Was Jesus,” a collaboration with Zach Williams in the Best Contemporary Christian Music Performance/Song category. A week later, former President Barack Obama lamented that he hadn’t given Parton the Presidential Medal of Freedom. Perhaps that will happen in 2021?

Not that she’s short on awards. She picked up the new Hitmaker award from Billboard in December, and told viewers, “Of course, I’m proud of all the wonderful women in show business that write all these wonderful songs. I’d like to acknowledge a few — some of them older, kind of back in my day. Cindy Walker, who wrote some of the greatest songs ever, and of course Loretta Lynn, a wonderful, wonderful songwriter. And this day in time, of course, Taylor Swift, she’s just right up there, probably number one. And of course, Brandi Carlile, there’s just so many that write so many good songs. I think it’s so important that we acknowledge the women that write and sing in country music. And I think it’s also very important that they take control of their own business. I know I’ve had my own publishing company for years. Same with a lot of these women that I mentioned. But anyhow, I’ve just wanted to always say, ‘You go, girls!’ We can do it!” (Like hundreds of others, the trophy will be housed in her museum in Dollywood.)

This year, and in all years, we commend Dolly Parton for her work ethic and for making herself available to her fans. Yes, she knows how to market herself through visibility and personality, but in 2020, when so many of us have stayed in, she’s gone the extra mile to put herself out there, safely.

On November 30, she wound up in New York Times‘ Style magazine in its “Diva” series, alongside Patti LaBelle and Barbra Streisand. One of the most accurate depictions of what it’s like to be around Dolly (and to always wish you had more time to spend together), the article’s author Emily Lordi quotes Dolly talking about her ambition: “I just wanted to do really good work, and I wanted it to make a really big difference in the world … to uplift mankind and glorify God.”