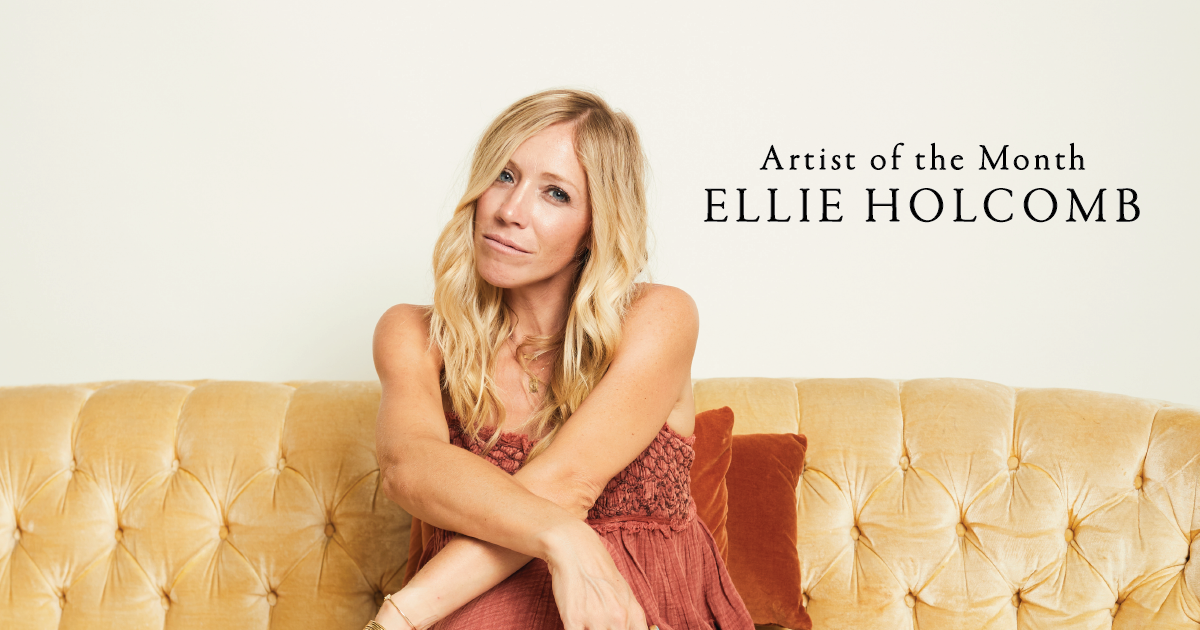 As a consequence of growing up in the music industry and singing background vocals on albums since she was 8, Ellie Holcomb opted not to seek a future as a professional singer.

“I actually decided that I didn’t want to be a part of it at an early age, which is hilarious,” says Holcomb, who today has a thriving career as a Christian music singer and also records and performs with her husband, Drew Holcomb. It amounts to two separate careers, with her solo music tending towards inspirational anthems and the duo producing a more intimate Americana sound. Ellie’s powerful voice is equally adept at belting out a dramatic ballad or giving a more tender, reserved performance.

Ellie’s father is producer Brown Bannister, who produced albums by Amy Grant and many other Christian singers. He now runs the music school at Lipscomb University in Nashville.

“I was around a lot of people who did this for their work,” she says. “I’m so grateful because I saw from a really young age the power of music to encourage, to bring hope and to help people feel less alone. But I also saw the cost of doing music, like you have to leave. It’s often really hard on families.”

BGS: You’ve got a powerful voice. When did you first realize that?

Oh, thank you. I guess from a pretty young age. I was singing in studios with my dad. When the budget ran out, I would come and be the background singer on whatever project he was working on.

What a great way to get experience.

I’ve kind of learned from the best in terms of how to become a singer. But I think even on this last record (Canyon, 2021), there were parts of my voice that I didn’t really know were there. As I’ve gotten older, there’s been this other realm that I’ve tapped into. It feels like painting with more colors. That’s been really fun, to realize I have this whole other set of tones and colors and textures that I didn’t realize in my voice.

Who are some of the artists you worked with as a child?

I sang on (Amy Grant’s) Home for Christmas as a little 8-year-old girl. It’s kind of hard to imagine artists in the Christian world that I haven’t sung with. I’ve done Sandi Patty back in the day, Steven Curtis Chapman, Matthew West, Charlie Peacock, Mercy Me, Bart Millard. It’s hilarious because there will be songs I’m hearing and I’m like, “Oh, it’s me. I forgot I sang on that.”

How do you and Drew differ in your music tastes?

It’s interesting. We have a lot of overlap in what we love. He grew up listening to Bob Dylan and Van Morrison. When I grew up, my dad was making records with Amy Grant. I love Sara Groves. Then we both love Carole King. He leans a little more into the rock land, and I lean more singer-songwriter.

You have young children (Emmylou, 9; Huck, 6; and Rivers, 3). Is touring difficult for you and Drew because of that?

I feel like we found a really beautiful way to kind of blend all that together. We bring the kids on the road a lot and we tour together and apart. So we kind of have a crazy schedule. But thankfully, Drew is a logistical ninja. He’s really good at keeping tabs on where everybody is and childcare. We’ve got a village of people that have come around us. We just keep getting family members and nannies (to help). It just feels like when they have to move on, we have another aunt in the arsenal. So we have been very blessed to have family and friends and incredible nannies come alongside of us as we do this crazy music life.

You quit your husband’s band (Drew Holcomb and the Neighbors) after seven years in 2012, and then pursued a solo career. What brought that about?

I’d actually quit Drew’s band to be a stay-at-home mom. Our daughter was in a car seat for over eight hours a day. By the time she was six months, she’d been to 32 states and Canada. And I’m like, “I don’t think I can keep her in a car seat for seven hours a day, poor thing.” So I quit to do the mom thing.

How did that morph into launching a solo career?

It was hilarious. I kept trying to write songs for his band. But often when I would sit down to write a song, I would say, “Drew, I’m so sorry, I accidentally wrote another song about God.” I didn’t mean to, but I’m just a spiritual person. I don’t fully understand everything, and I feel really comfortable in a lot of the mystery, but that is something that my heart has always been drawn to. And so I loved what Drew’s response was. He was like, “Hey, write what’s in you. Let those songs out.”

When he said that, it lit a fire within me. I don’t know that I needed permission from him, but all of a sudden I just felt this freedom to sing what was in my heart. That’s usually me saying, “I believe, but help my unbelief.” I’m usually wrestling my faith to the ground. I’m working my faith out through song. I guess the songs were helping me find some semblance of peace and comfort and solace. So I thought, “Man, maybe they’d help somebody else. That’d be cool.”

Does the divisiveness going on now in the U.S. tempt you to write political songs?

I don’t know that it does. I feel called to move forward in love, and I guess sometimes that will intersect, politically speaking, in terms of using your voice to speak up on behalf of those who maybe don’t have a voice. That can look political at times. But I think for me, I’m less motivated by politics and more motivated by love and peacemaking. But sometimes to make peace, you’ve got to tell the truth.

Many of your solo videos are filmed with spectacular nature backgrounds. Why do you return to that approach so often?

It’s very intentional because creation itself is one of the ways that I experience God most. I feel like the story of love beating death is written all over creation. When the (coronavirus) numbers were low, we did a trip where we went down into the Grand Canyon, rafted the Colorado River, spent the night on the riverbanks and then rafted out. While we were down there, a guide was telling us that in the Grand Canyon, the walls really tell a story. It’s actually a story of disaster upon disaster: landslide, mudslide, volcano, earthquake, flood, drought. Then there’s this great divide split wide open by a river, and I thought, this just looks like a picture of literally all of our hearts, especially after the last two years. There is a current of love that runs deeper than our deepest ache, pain or longing that will carry us back to a place where we can know that we’re beloved, no matter how broken we are. I’m like, “All right, let’s get in a place where I’m reminded of that. Maybe it’ll remind other people of that.”

You’ve spoken on stage about seeking help for depression and anxiety. Why did you decide to do that?

I want everybody to know how precious they are. I want to remember it myself and I want kids to know that. So it’s been a joy to speak openly about depression and anxiety and worry and fear and division and to say, these are all real things in a broken world. But we’re invited to be hope-people and bridge-building people and people who are about reconciliation and love. I really love getting to come stumbling and tripping and broken and full of doubt and fear sometimes into the presence of love. And I will happily hobble my way into that presence over and over again and invite others to come along with me.