5 of the Best Videos from Six-String Soldiers 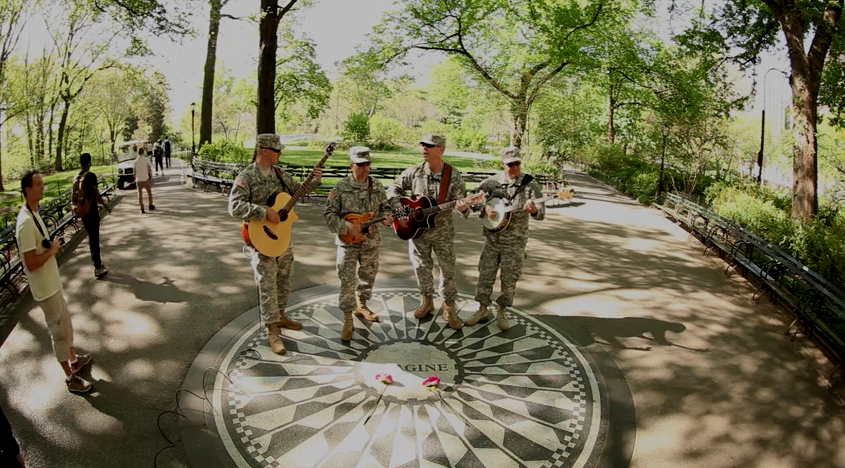 Over the Summer, the Six-String Soldiers captured our hearts with their cover of John Denver's classic song "Country Roads," which they performed — complete with banjo, mandolin, guitar, and bass — from the back of a pick-up truck. The four-piece ensemble is part of the United States Army Field Band, a traveling organization known as "the musical ambassadors of the Army." Band members Master Sergeant John Lamirande (mandolin), Sergeant First Class Thomas Lindsey (banjo), Staff Sergeant John Brandon Boron (guitar), and Sergeant First Class Glenn Robertson (bass) have all served in the Army to varying degrees, and have shared stages with major artists like John Mayer, Martina McBride, and Charlie Daniels.

We couldn't help but round up five of our favorite videos from the talented group of soldiers.

The Soldiers worked through a beautiful, acoustic take on the Beatles classic on a sunny morning in Central Park last Summer. We especially love Lamirande's mandolin flourishes on this tune.

"Looking at the World Through a Windshield"

The band caught the attention of late-night host Conan O'Brien and took a trip to play his show last December, regaling the TV audience with their take on a Del Reeves classic.

"Take Me Out to the Ballgame"

Last year, the band had the opportunity to play at Chicago's historic Wrigley Field and they chose to keep it traditional with a bluegrass-inflected take on baseball's favorite song.

They wouldn't be a true modern string band without a cover of Old Crow Medicine show's mega-hit "Wagon Wheel" and, for this number, the guys take the lyrics literally by performing their take of the tune while traveling — with the help of a fellow soldier — down the highway … likely "headed down South."

David Bowie's death in January of this year affected fans of all stripes. While the band was recording their first studio album, they took some time out to record this version of Bowie's "Ziggy Stardust," a studio version of which may make it onto a future LP.