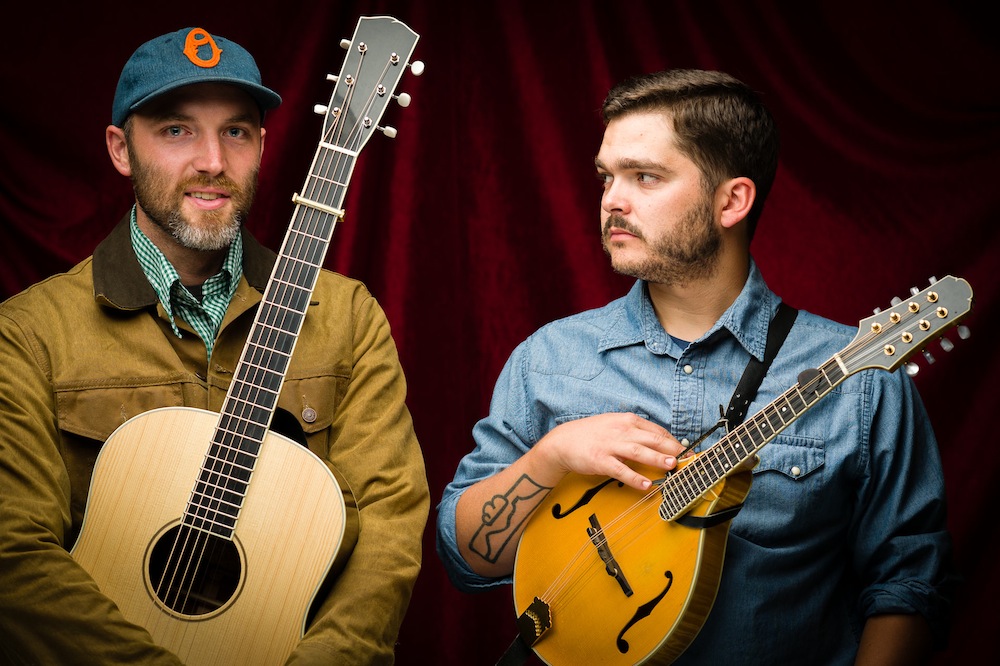 You should know, this is not the first time CAHALEN MORRISON AND ELI WEST have made an appearance on this site.  Quite honestly, ever since we heard the Seattle-based duo’s 2012 release Our Lady of the Tall Trees we haven’t been able to get enough of their beautifully crafted harmonies and skillful picking.  It’s a sound that is both simple yet intricate; familiar yet new.  It’s why we absolutely had to include them on The Sitch’s 2012 Anti-Year End List, and the same reason so many other respected musicians in the industry list them as an influence (case in point: Kimber Ludiker of Della Mae’s recently contributed Mixtape).  So the real question is: why aren’t you listening yet??

Cahalen:  My dad is a musician – fiddle, guitar, things like that – so I grew up with a lot of bluegrass and old time music in the house.  In middle school I started playing drums and was in a band for several years.  When I got to college I studied jazz and drums, but I never really stopped playing guitar.  After college I went on the road for a few years by myself.  At one point I was visiting my sister in Seattle, and Eli and I had this mutual friend there, which is how we were introduced.  We played together and tested it out for a little bit and found ourselves very in sync.  The rest, they say, is history.

Eli:  I was a little more into folk than bluegrass.  I started playing Suzuki violin when I was 5 and by about 7th grade I thought guitar was much more interesting, but my mother – being the smart woman that she is – said if I wanted to make the switch I had to take guitar just as seriously as I had been studying violin.  In middle school and high school I was playing a lot of big band, swing music and by the end of high school I had discovered flatpicking.  In college I was a visual arts major but never stopped playing.  It was there that I really caught the bluegrass bug – hearing it totally changed my path and interests.  Started on mandolin and a little bit of banjo… but music was still secondary – I was focusing on visual arts, with a political science minor… never thought I would be a professional musician.  After college I moved to Seattle where I was a graphic designer for several years.  Once I met Cahalen, I made the switch to do music all the time.

I think timing was a big variable… Cahalen had already been on the road for three years when I met him, and I was really worn out from being a graphic designer, so we were both ready for a new path.

We’re very complimentary yet different musicians… we’re not competing for the same roles.  He’s the primary songwriter – writes the majority of the material.  I was drawn to his songwriting.  But I’m the harmony to that.  I help in the arranging.  It’s all complementary.  That’s why it works.

Cahalen:  Definitely Tim O’Brien – my dad was a big Hot Rize fan, and eventually got in to his solo stuff so I grew up listening to a lot of that.  But then goes into folk songwriter  Greg Brown and Kelly Jo Phelps.  Outside of that, I also read a lot of poetry, which I think sneaks into my own lyrics and the music as well.

Eli:  I would speak more to my identity as an improvising musician.  I’m definitely a subscriber to the Bill Frizell school of improvisation.  Pat Metheny’s One Quiet Night – which is him playing acoustic baritone guitar – was pretty transformational for me.  And I think the standards are always Tim O’Brien and Tony Rice.

Eli:  We’ve both hit it really hard the past few years to get where we’re at right now.  We’ll definitely keep going, booking for the duo, etc.  Plus I’m still doing some graphic design work on the side

Cahalen:  I don’t think either one of us has plans to stop doing what we’re doing as a duo.  Planning on another record in the future.  A bunch of tour dates coming up.  Plus I have a country band project that I’ll be working on, the record for which won’t come out til the end of 2013, which should be fun and a nice change of pace.