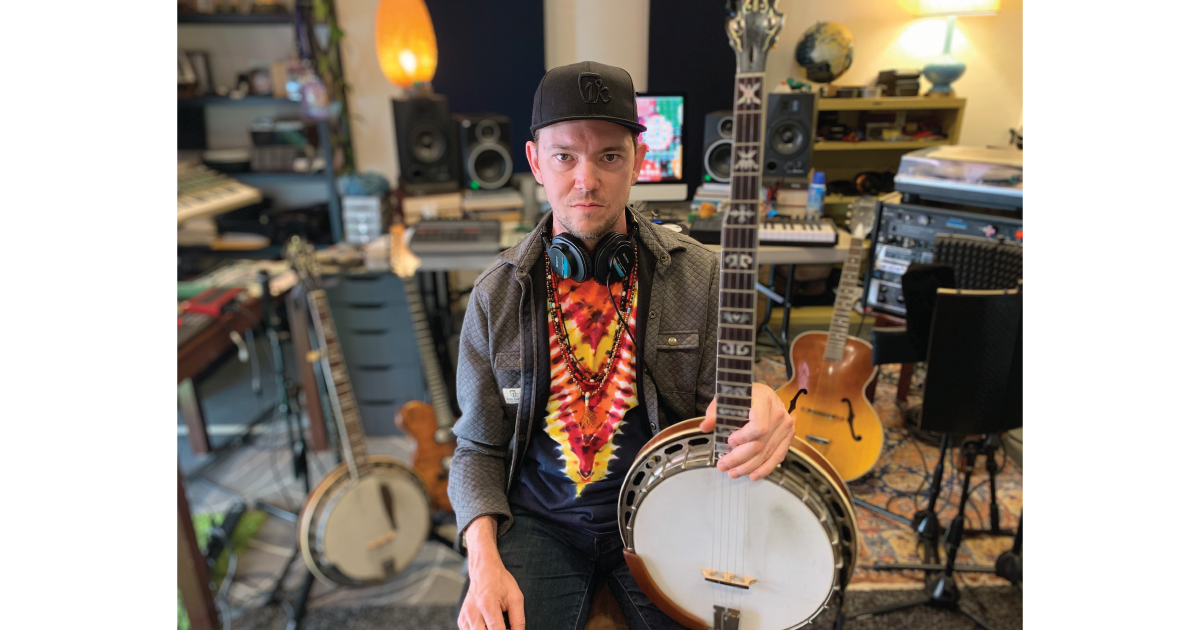 From one perspective, this is a really tough question for me because there are many sides to my music, and many influences that have factored in really heavily at different periods. But from another perspective, it’s easy. I wouldn’t be playing the banjo if it wasn’t for Béla Fleck. I discovered the Flecktones in high school and was just blown away in every possible way. It was a moment of pure inspiration, and after a handful of shows all I wanted to do was learn how to play the banjo. That was the start of my journey as a musician, and none of that happens had I not discovered Béla’s music.

But his influence doesn’t end there. He’s a legendary improviser on the instrument, and that’s a big part of what the Stringdusters do. But maybe even more importantly, he’s made his mark by recontextualizing the banjo, combining it with so many eclectic sounds and bringing it to many new genres. That’s a big goal of mine as well, and that’s very much inspired by Béla. He didn’t leave too much undiscovered territory! But the bigger your imagination, the more territory there is to explore, and I love that challenge.

I have many great memories of being on stage, but the night that we played in Covington, Kentucky, in the summer of 2019 stands out. It was an electric show, and the moment we walked off stage we all sort of simultaneously decided that we had just made a live album. That has only happened a handful of times in our career, even though we have had many gratifying shows. But this was one of those stand out nights where something connected on a deeper level. It seemed like everything we did just hit the crowd with maximum power, and then they were feeding us with so much energy and emotion. That’s what can happen at a show. It can happen any night, even when a venue is not packed out, and that possibility is one of the great thrills of this career. On a night like that, everyone there is an equal participant in the performance. There’s no divide between the performers and the crowd, and the possibilities are endless.

I get inspiration from a lot of places, but books and visual art are high on that list. I love artists and writers who surprise you. It may not inspire a specific melody or song, but it definitely stokes the idea inside me that anything is possible, and with imagination and creativity you can always find new paths to travel. Lately, I have really enjoyed the work of Clyfford Still. Still was an American, abstract painter whos work is bold and stunning. There’s a beautiful museum dedicated to his work here in Denver, and it turned me into a big fan.

I also love reading science fiction, mainly because the imagination factor of good sci-fi is off the charts. I read a trilogy of books in recent years called The Three Body Problem by a Chinese author named Cixin Liu that blew my mind. The story is gripping and endlessly creative. Two song titles on my new record, Trance Banjo, are references to that trilogy, both from the second book, Dark Forest, which is my favorite. Great art of any kind transports you to a place that feels very free, where there’s no strong sense of self. I get a lot of inspiration from that feeling.

Playing music is one challenge, but performing is a whole other hill to climb. When I am getting ready to play live or record, I always try to spend some time with my instrument (15-45 minutes or so) playing really mindfully and getting in the zone. That zone of being deeply focused on the music has seemed like a mystery at points in my career, and will forever be elusive in some way. But there is also something methodical about it, and that’s where practice comes in. When I practice I spend some time focusing on more mechanical elements, a new technique, transcribing or that sort of thing. But ultimately, I want to devote a good chunk of every practice session to building that zone. A good practice session should be like a meditation. The more time you can log in that focused zone, the more you know what it feels like and the easier it will be to conjure up in a performance setting. It’s a lifelong journey, and it certainly keeps you humble! But it’s not magic, it just takes practice.

I think my most consistent goal is to sound like myself as a player, and craft music that is unique as a producer. Bluegrass is the banjo’s native territory, and a common goal among proficient bluegrass players is to study and copy the styles of the early masters. For banjo players, that’s Earl Scruggs, and I would give anything to sound like Earl! There is so much great knowledge there, and so much expression as well. It’s a bedrock element of the instrument that practically every great player has a deep knowledge of.

While I have spent much time working on the fundamentals of Earl’s style, that is more of a starting point for me, and not an end-game. There are times on stage when I really try to emulate that older sound. But when it comes to crafting my own style and my own music, I try to use those old school bluegrass rudiments — timing, power, tone — but then add my own voice as well. The same goes for producing. It’s all about identifying and connecting with sounds that move you, and then using your imagination to grow from there and utilize those tools to bring your own vision to life.