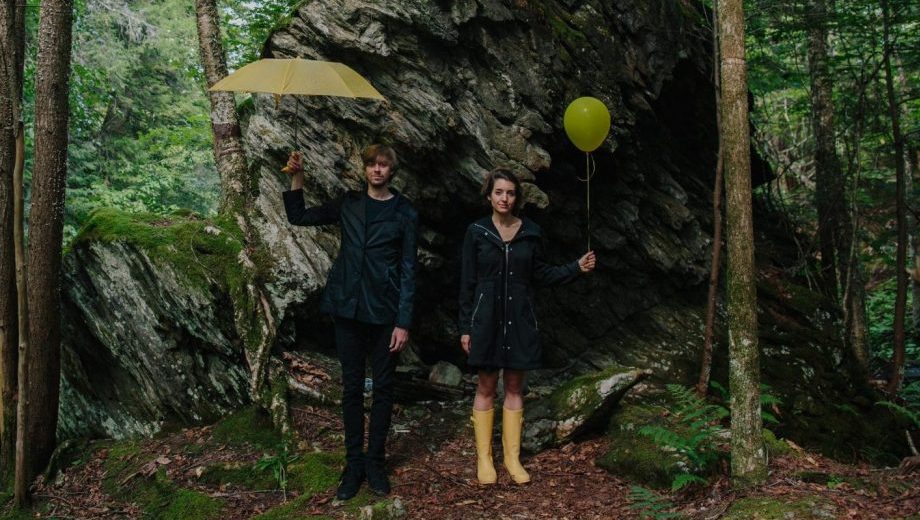 Artist name: Cricket Blue (Laura Heaberlin and Taylor Smith)
Hometown: Burlington, Vermont
Latest album: Serotinalia
Personal nicknames (or rejected band names): What a good question! We call each other a lot of nicknames. Taylor: Scarecrow Wilson, Friday (pronounced Fri-dee), Jack (only when Laura is implying we need to hit the road); Laura: Old Toast, Dusty. We each have ancestor Wilsons who have roots in Kentucky, so we used to joke that we were related and that our band name should be “The Blue-Eyed Kentucky Wilsons.”

Laura and Taylor: Fiction is definitely the art form that informs us the most. Particularly short stories. A short story seems to be allowed to leave dangling questions the reader is left to digest after it’s over, and that’s ideally what we would like to do with our songs too.

Laura: Two writers that come to mind for me are Alice Munro and George Saunders. Alice Munro creates characters who you discover are at the mercy of forces acting upon their lives, and in the course of the story you feel in your belly how these forces create non-ideal patterns of behavior. You could call them feminist stories. They’re not didactic in any way and they don’t propose any solutions, but they give you a snapshot of why things need to change. That feels like the most powerful thing art can do, to me. And then you have George Saunders who is totally wacky and writes these super flawed characters. As he is defining his characters in a way that is supposed to feel totally different from you, he is also making you love them; you’re pulled in all sorts of directions and you’re surprised by your own radical empathy that he’s created. While I don’t think we pull off that flavor of feeling, we definitely like to expose our characters’ flaws while hoping our listeners will find something emotionally resonant in spite of or because of those flaws.

Taylor: I think my lyric-writing has also been influenced a lot by some poets. Dylan Thomas, for example, has this sort of dreamlike use of adjectives, and nouns-as-adjectives, that manages to create really specific moods and tableaus often without being literally descriptive of much. When I try to paint a mood rather than narrate a literal sequence of events I sometimes think about emulating that. There is also a children’s show that we like called Over the Garden Wall that has a simply amazing soundtrack, and we are inspired by the aesthetic and attitude of the whole thing. When we were writing the arrangements for Serotinalia, we were steeped in that soundtrack quite a bit.

Laura: I sort of wish we had more rituals to treat those experiences with some sort of reverence, but what we actually have are jokes that will never cease to be funny for us. When we’re warming up one of us will invariably suggest that we “run a couple Leisls” which means we sing that descending melodic run that comes right after “The hills are alive” in The Sound of Music. Sometimes in the studio, we will trade glasses to get into the other person’s spirit. We both have terrible eyesight, and it’s roughly the same amount of bad, so when we need to inhabit the other person’s vocal approach to sing harmonies, that feels symbolically helpful and silly.

One useful thing we do when we’re recording vocals is we do two extra takes, one called the “humble take” and one called the “robust take.” That way if we realize when we’re editing that we have a habit of delivering a line in like a weird indie-folk accent, or we always scoop too much on a certain word, we’ve got one take that’s un-ornamented so we don’t cringe every time we hear the recording. I will admit that the robust take is mostly entirely useless because it’s so over the top, but it’s fun to do.

Laura: I mean, there are just so many directions that one could go. For intensity of experience, I’m going to go with Harbison cheese and Nat King Cole. There is something about Nat King Cole that makes me nostalgic for a time I’ve never known. His understated, wistful vocal performance a la “You Should Have Told Me,” the soupy string arrangements on some of his love songs, etc. His music is entirely different from anything that we are trying to make, but it’s still an important part of my musical diet, and I admire its emotional impact.

To go with the music, there is this local cheesery called Jasper Hill Farm that makes this indescribable cheese called Harbison; it’s won all sorts of awards so you can sometimes find it outside of Vermont now. I eat mostly vegan these days, but this cheese is still my favorite food. It’s a soft cheese that’s wrapped in spruce bark, and when you pick yours out, make sure you give all the wheels a sniff and pick one that’s a bit squishy in the middle and smells a little funky. When I skip dinner and eat three-quarters of a wheel of Harbison on baguette while listening to Nat King Cole, there is some chemical reaction that takes place. I feel joyful and appreciative. It is the closest thing I have ever experienced to a love potion, truly. I cannot more highly recommend this simple date night idea.

Laura: That is an interesting question. The answer is all the time because all of our songs are basically fictional, but it doesn’t quite feel like hiding. I think the core of all of our songs are flaws in ourselves and in the world that we’re looking to investigate, and characters provide the greatest flexibility in terms of how to confront those flaws. Writing character sketch songs allows us to use irony in a way we wouldn’t be able to if we were writing from a confessional perspective. We are able to play with narrative distance to let the audience in on logical contradictions the characters themselves aren’t aware they’re making.

For example, the song “June” starts out with the titular character saying she’s reaching out to her ex-boyfriend but not because she wants to see him, and the last line of the song is her asking him to come and see her. Similarly the narrator of “Psalm” defiantly thinks she’s thriving after her breakup, claiming, “lay my head on some new pillow; I don’t cry” but in the very next line she is crying. While these are patterns we are investigating in our own psyches, we are allowed to poke a little more fun at our characters than confessional songwriters can poke at themselves.

Taylor: We also sometimes talk about truth vs. Truth. For instance, in “Burdens Down” I was writing about friendship, and how to love your friend who has gone through trauma. My personal experience with this had mostly been in friendships with women, but in the revision process, we were getting stuck trying to keep the song from slipping into implying there was romantic baggage in the relationship. Then I had the idea to change the story of the song to explicitly be about a friendship between myself and a guy friend, and it was like, bingo! That automatic implication or reading went away. So while the song now was fictionalized in that detail, it was Truer in that it was better able to express what I was trying to say in an uncluttered way.

Sometimes I use “I” characters that are “me” but in some exaggerated and incomplete way, like a caricature. “Straw Boy,” for example, is narrated by a version of me that exemplifies some personality traits that I really do have, but maybe don’t like very much about myself. So the narrator of the song is somewhere between my true self and a character. I think I write songs like that as a form of self-examination, and as a sort of exorcism of those versions of myself — once I’ve crystallized some way-of-going-wrong into a character, later in my real life I can be like “you’re Straw Boy-ing, stop being the guy from Straw Boy.” Maybe that’s a weird reason to write a song, I don’t know.

Laura: This feels sort of controversial to say or something, but my favorite version of nature is greenhouses and gardens. It’s like marrying nature and art. I travel to Pittsburgh a lot, and something I really appreciate about that city is that all of the houses, no matter how small their lawns are, have some sort of elaborate tiny Victorian garden. Hedges and ivy and stone benches everywhere. I have a dream of one day having an ornate walled garden filled with climbing roses, and commissioning a fountain of Niobe constantly weeping in the center. It’s a very dramatic dream. Taylor and I both have a love of the botanical, and ornamental flowers and plants are constantly showing up in our songs.

I think we’re also both interested in the liminal space between wildness and domesticity, and how humans march around thinking they’re firmly planted in the domestic sphere, but they’re not so different from plants — decorating themselves when they’re feeling romantic, for instance. A lot of our songs showcase liminal objects/spaces between man and nature: roads, parking lots, domesticated dogs, windows, doorways, produce. And a lot of our characters are trying to reckon with their own internal sense of wildness. I don’t know if my love of gardens caused that interest in liminality exactly, or if they just both stem from the same place. I will say that the intro and outro of the song “Alicia From the Store” was originally in my mind about a bird stuck in a greenhouse, which is why it hangs on that descending minor third in the word “worry” since birds are always going around singing descending minor thirds. Once you start listening for them you can’t stop hearing them.