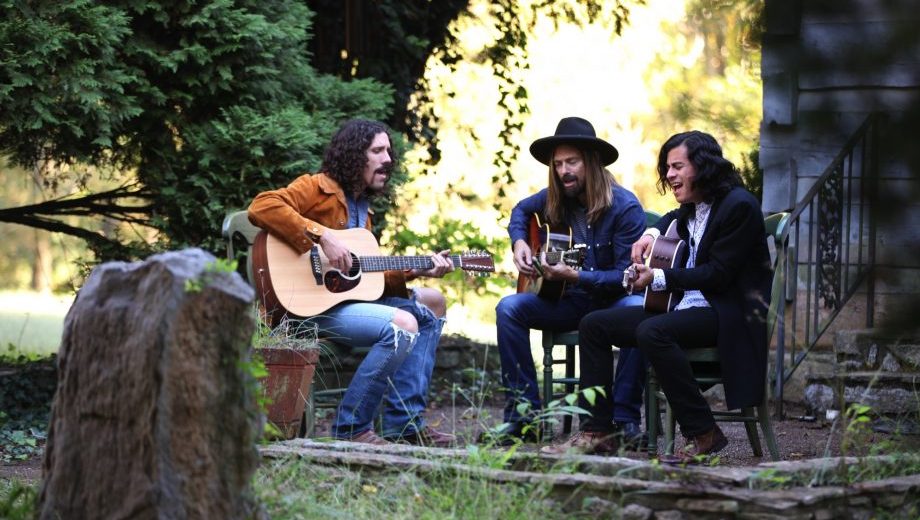 High South has many influences and each member has his own favorite(s), of course. Interestingly though, we really do share a LOT of influences! Groups like CSN, America, the Eagles and The Band all immediately come to mind as helping shape our music. I also feel like there was an era of music from the mid ‘60s through the ‘70s when artists were very socially conscious. They wrote about love, peace and inclusion. We’ve been inspired greatly by that same spirit and whenever possible try to inject those same ideas into our music. — Jamey Garner

My favorite “on stage” High South memory is a recent one. We traveled to Grundlsee, Austria, this past summer to play to 10,000 very enthusiastic music fans. It was our biggest crowd yet. Such a rush!!!! — JG

A favorite ritual of ours is one we like to call “The Victory Dance.” There’s a Victory Dance at some point after every single High South show. It’s a chance for (usually) just the three of us to gather ourselves, talk about the show and also usually the last chance to bring up business before we really let loose. The Victory Dance is also how we refer to the joint that gets passed around during that meeting. — Kevin Campos

Mission statements can be a tricky thing. Sometimes it’s easy to get lost in the big picture. Obviously, we want to spread as much peace, love and harmony as we can, on as large a scale as possible. But the deeper we get into this thing, it’s starting to become more and more apparent that the best way to spread love is to give it honestly. That requires connection on a personal level in order to be authentic. The beauty of a real expression of love is that it feeds on itself and grows exponentially. The small victories turn into big ones in a hurry. We’re just trying to water the garden plant by plant, so to speak, in hopes that human nature will take it from there. It can be a beautiful, compassionate world if we let it be. — Phoenix Mendoza

A part of nature that never leaves our side, especially when we’re home, is our pets. Phoenix has a dog and Jamey has two. I am the proud uncle of Rico, Boo and Lulu, respectively. Our producer and co-writer, Josh Leo, has seven dogs and four cats out on his property in College Grove, Tennessee, where we did a lot of recording for the EP. In fact, at the very end of “Change In The Wind” you can hear a bark from his dog Jack that was at the end of an acoustic guitar track. He was probably asking to be let back in after going outside to relieve himself. Needless to say, we love our pets and have an affinity for all animals. Love, in all its facets and manifestations, is a central part of what High South is about and we feel like there a lot to be learned from the type of love a dog is capable of giving to those it chooses to love. — KC