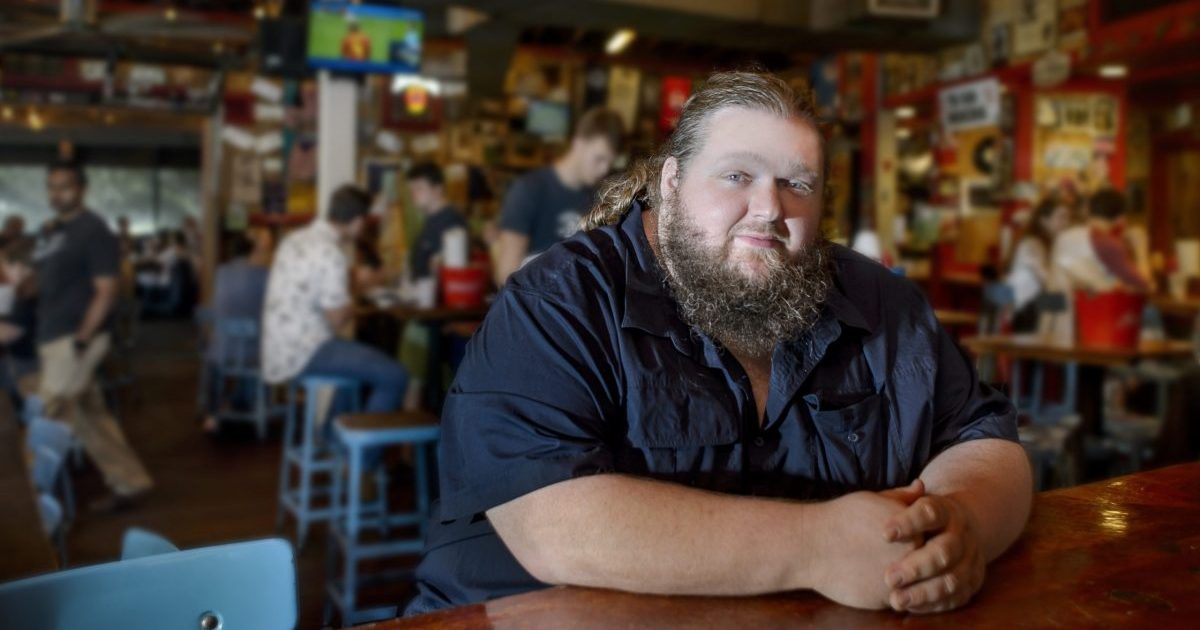 Artist: Matt Andersen
Hometown: Perth-Andover, New Brunswick, Canada
Latest Album: House to House
Nicknames or Rejected Band Names: No nicknames, none that I’m aware of anyway… No real rejected band names either. The first band I was in was called Stubbyfingers. Loved that name and loved the people I played with.

It was my second tour with Stuart McLean and The Vinyl Cafe. We were making our way across Canada playing all of our largest cities as part of his annual Christmas tour. As the tour was coming to an end, I was lamenting to Stuart how I really wished that my parents would be able to catch the show, but didn’t see it happening as my dad had never been in a plane, and wasn’t keen to ever be in one. We had two shows coming up in Ottawa at the National Arts Centre, a venue that holds around 2,500 people. After passing the phone to Stuart during a call home to my folks one night before a show, he convinced my dad to get on the flight and come see me play. On show day at soundcheck, we got my mum up on stage to sing a song with the band. After seeing that, Stuart decided he’d surprise mum and get her up to sing during the show. Standing beside my mum in that room in front of a sold-out crowd was, and still is one of my favourite moments. It was a beautiful melding of where I came from and where I was.

Not so much of a ritual, but more of a headspace I like to get in. I love having a quiet room to myself a good 15 or 20 minutes before a show. No distractions or decisions, just a space of time before I hit the stage. If there is an opener on the bill I’ll pop out to check out a song and see if I can get a sense for the energy in the room. If I’m the opener I’ll stick my head out and have a listen to the crowd as they come in. I can often get a feel for them just by listening to the bustle as they get themselves situated. Other than that, I change my strings before every show. More of a necessity than a ritual, but I sometimes feel like that’s my equivalent of a morning coffee before stepping into the office.

If I try to enjoy a meal and a performance at the same time I find it takes away from both experiences for me. I’m too caught up in the music to really focus on the food that has been prepared and I end up missing the subtle nuances of a song when my head is down searching for the best approach to my plate. For me, the best pairing would be Bonnie Raitt with just her voice and a guitar in a room that is just slightly too warm and small enough that I could hear her voice as much off the stage as I could through the speakers. A generous pour of a peaty scotch would be the perfect accompaniment. After the show… steak and eggs.

“Always be the worst musician in your band.” A friend/bandmate told me this years ago when I first started going out on my own. I’m not sure if it’s something that he learned himself, or if it’s a wisdom that was passed down to him. I’ve always surrounded myself with musicians that I have to work to keep up with, musicians that inspire and challenge me. It’s a comfort to be on a stage and know that the only person I need to worry about making a mistake is myself.

Music was something I just grew up with. My grandfather was a big influence, as well as my mother. Many other family members played and folks in the community. Whenever there was a gathering at the house, there was music. It was something I did more to fit in and be a part of the family than anything. I never really thought about being a musician. Music has always been there for me. I do recall however the day that I decided to take a swing playing music full time. I’d been gigging on weekends while working through the week at a factory making frozen dinners and fruit pies. One day they called me into the office and gave me the option of putting on a beard net or shaving my sideburns. I gave them my two weeks’ notice.