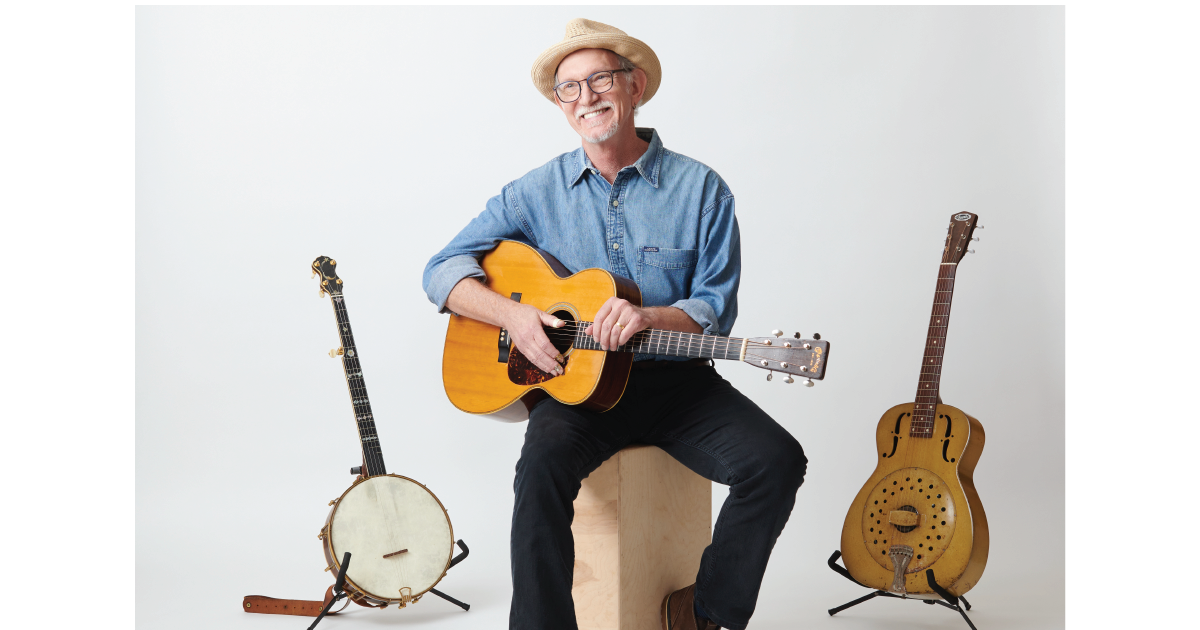 When a music-loving boy from the Bronx was 11 years old, he asked for and received a guitar — his first instrument. He would grow up to become a world-renowned old-time musician, known and respected for his fiddle and banjo prowess and prolific recording career. In February 2022, that career would be punctuated by his first-ever all-guitar album, bringing fingerstyle guitar, a skill oft overshadowed, to the forefront.

Everywhere You Go is far from the first time Bruce Molsky’s musical activities have exhibited influences beyond string bands. From a young age, he has held a deep appreciation for all types of music. Growing up in New York City, itself an intersection of a plethora of musical genres, Molsky was exposed to everything from Motown to Bob Dylan to Bill Monroe, and he absorbed it all through radio, LPs, and live performances.

“I didn’t have any real filters because I didn’t have any expectations for myself. I wasn’t all about playing an instrument yet, I was just kind of about being around the music. I still try to maintain that attitude to keep an open mind,” he says.

Given this curiosity and sponge-like relationship to his sonic surroundings, it makes sense that despite growing up in an urban environment, Bruce ended up playing old-time mountain music.

“I came upon old-time music when I was in my late teens, but I didn’t even think about playing it professionally until I was in my mid-30s. I didn’t grow up with those cultural roots. Roots and folk music were really strong in the northern cities when I was growing up in the ‘60s … the way that I’ve learned about a lot of musicians was reading the back of album jackets, hearing that this person played with that person, or this person learned from that person. All of a sudden you discover whole communities of people that have similar repertoires, and you start to identify communities of people who played a similar repertoire and had similar kinds of expression and ornamentation. Trying to piece all that stuff together is like trying to get to the end of the internet. You’re not going to get there. There’s always something new to discover. That’s the beautiful part. I’ve been doing this music for a long, long time and I still feel like I don’t know anything yet and that’s fine.”

Although his professional reputation is largely dominated by a focus on old-time mountain music, Molsky has avoided musical tunnel vision. He allows his appreciation for multiple genres, styles, and cultural influences to inform his musicianship.

“Over a period of time you develop your own voice, and if you play a specific style of music, you always run the risk of doing that to the exclusion of other things. We do that when we’re first learning to play, or when we’re first embracing a style. At one point, I realized that there was all this other stuff I liked. It wasn’t any big amount of effort to just kind of let it seep in.”

Nowhere are the results of this approach more apparent than Everywhere You Go, released on Tiki Parlour Recordings. This 11-track, all-fingerstyle-guitar album is a masterclass in the way Molsky has been able to weave together a rich variety of sources and influences from all over the globe in order to create something wholly unique. This empowered sense of creative agency he feels with the guitar has given birth to an impeccable result.

“It’s the instrument, of the three instruments that I play, that I’ve never constrained myself style-wise with, and it’s the one I’ve always not been afraid to try anything on … How do you get that thing into the piece that makes it cool, that makes somebody go ‘Oh, yeah, that’s a Swedish melody’? That’s been an evolution for me.”

In addition to its stylistic freedom, the introspective nature of this project sets it apart. Reading the liner notes, one learns that each track is tied to specific memories for this master multi-instrumentalist, yet this was never a conscious intention.

“I didn’t set out for this to be a memoir,” he says. “Honestly, I sat down and made a list of stuff that I liked to play the most and then started thinking about how to put it together. You try to put yourself in the position of the listener. There should be a balanced, well-executed, complete representation of something.”

Truly this is a musically varied project. It is Molsky’s own particular musical voice that ties it all together, and he’s had plenty of time to think about how to pull that off. Everywhere You Go is a long time coming – around 25 years, in fact. Like many musicians, Molsky used the pandemic as an opportunity to pursue a long-considered potential project.

“You know, it’s been swimming around in my head for all this time. Of course, the pandemic shut us at home for a while, and it just seemed like a good project.”

Although this project was born out of isolation, it was also in many ways born out of the deep sense of togetherness and connectivity that characterizes Molsky’s musical life, both as a band member and as a solo musician. In fact, that sense of connection was one of the original catalysts for the project.

“The track that I really, really wanted to include on a CD at some point was ‘Fios Chun A’ Bhàird [‘A Message to the Bard’],’ which is the one that Mary Ann Kennedy sings in Gaelic. That’s the only thing that wasn’t recorded recently. That was recorded ten years ago and I’ve been saving it up for the right presentation all these years. That was kind of the musical tail wagging the dog. That made me realize that I really wanted to do a project that made a piece of music like that make sense in context.”

Kennedy is not the only friend to join Bruce on this record. Darol Anger, internationally known fiddler and “musical brother” to Bruce, is featured on three tracks. Luckily, the ideal recording situation to enable this project to flourish fell into place.

“Just about an hour from home [Beacon, New York] up in the Catskills, the engineer Eli Crews has a piece of property near the Ashokan Reservoir. I’ve never worked with him before, but he came to me through other people that had, and he was easy to work with,” Molsky says. “If you can imagine, not just being in quarantine, being a solo performer locked up in a small space with one other person for a week, the chemistry better be right. It was with Eli. He was just a pleasure to work with.”

When it came to releasing the album, reaching out to David Bragger of Tiki Parlour Recordings was a no-brainer. Molsky and Bragger had collaborated before and developed a great working relationship. Much like Molsky, Tiki Parlour has become known for its focus on old-time music but has expanded professionally in different ways. Partnering on this project was a perfect fit, especially given that this release was going to be very different from anything either of them had done before.

Molsky also brought in fellow musician, longtime friend, and graphic designer Meghan Merker to work on the CD package design, another creative choice that was tied together with music and memory. “[This project] is such a representation of a long period of time. I’ve known Meghan since I was in my early 20s and she knows my trip. I really feel like she nailed the whole thing.”

Memory is inextricably tied to time and space. The things we experience, the places in which we experience them, and the people we experience them with never leave us, especially in a musical context. Whether collaborating with like-minded artists or engaged in solo work, Molsky stays focused on the relentless pursuit of dynamism and excellence while maintaining the utmost respect for his sources and influences. His approach to the creative pursuit of connection is one of curiosity and learning, and this shines through in Everywhere You Go.

“Music is just notes in the air, and people grab it, and they use it as their expression. That’s all I want to do,” he says. “At this point, I got nothing to prove other than trying to leave the world a little better than I found it.”