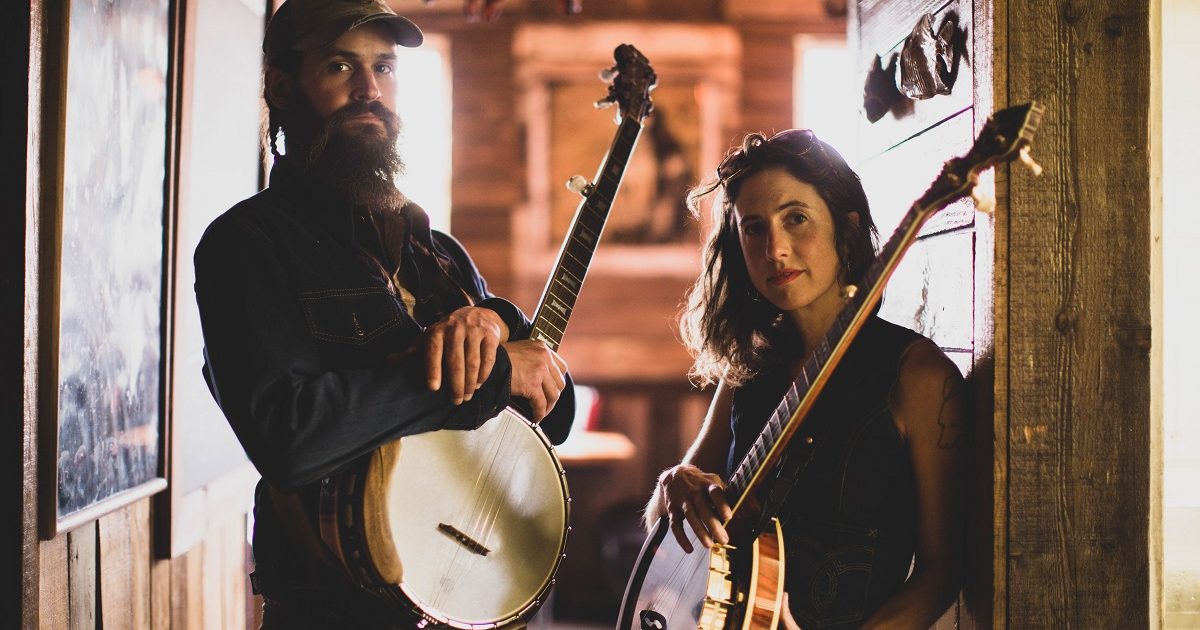 The Lowest Pair may be best known as a double-banjo folksinger duo, yet their new album is a full-band effort that somehow sounds like a complete departure without actually straying from home. It’s a fitting theme, considering that the release of The Perfect Plan – their sixth album in seven years – arrives during a global pandemic. BGS spoke with bandmates Kendl Winter and Palmer T. Lee as they were isolated in separate homes in Olympia, Washington.

“We’re supposed to have been on the road now — a couple of festivals the past couple of weeks,” says Winter, who spent this past winter in Antarctica working at a scientific research station and running the annual South Pole Marathon, in which she set a women’s time record. “We were thinking we were going to hit the ground running and now we’re just hitting the ground, trying to figure out how to promote the record in this new paradigm.”

On the bright side, with any luck, the fact that everyone is stuck at home will provide plenty of time to digest The Perfect Plan’s complex instrumentation and intuitive arrangements, worked out with multi-instrumentalist and producer Mike Mogis (Bright Eyes). Although previous efforts feature the stripped-down duo sound fans have come to enjoy in their live sets, this project is a little more aurally ambitious. Listeners still get their banjo and acoustic guitar, but these are afloat amid bass, drums, and electric guitar with all its effects.

“We wanted to hear what [our music] would sound like with a bigger sound,” Winter says. “We went into the studio pretty open to what Mogis was thinking, in terms of production. I think we both have dreamed about having drums and bass behind us. It’s not as easy to do on the road, but it was kind of a fantasy record.”

Lee, a Minnesota native who spent his winter at a writing retreat in Wisconsin, agrees. “We’ve definitely been talking about doing bigger band stuff in different ways over the years. Logistically, it’s a bit of a challenge and a bit of a gamble, I suppose. Being a duo, you keep your overhead pretty low. It’s just simpler that way. But it’s definitely been a dream of ours for a while.”

The Lowest Pair began when Winter and Lee were playing in other groups. They spotted each other at a bluegrass festival. “I remember seeing Palmer’s string band and noticing a kindred thing he was going for,” Winter says. “He played the banjo but differently from other people, putting more notes in it. He has a soulful voice, saying stuff that isn’t very common in bluegrass music. He had a song about tea and I had a song about tea, about drinking tea. I felt like … we’re going for similar things from really different places, with different vehicles.”

That night, they spent hours jamming around a campfire. Though they continued to follow each other on social media, it was another five years before their paths crossed again. Both were considering solo projects and decided instead to join forces, ultimately naming their duo after a John Hartford poem.

Winter remembers: “Palmer got a hold of me and said, ‘You look like you need a singing buddy.’ He proposed the idea of doing an album together. As soon as we started singing together people responded immediately. Both of us were like, ‘Well, we’ll just do this.’ We kind of had shows lined up before we even had a band, because I had been working on a solo project and no one really minded that I came with somebody else.”

As it happened, when that summer wrapped, Lee had studio time booked with Dave Simonett of Trampled by Turtles as producer. “I was going to do a solo record and then I [told Dave], ‘Hey, I’m working on this new project. Let’s do this instead.’ That’s when 36 cents happened,” Lee says of the duo’s 2014 debut album.

A string of quickly-released projects followed as Winter was on a roll, churning out great songwriting for one recording after another. Somewhere along the way, the duo got into a rhythm, barely even needing to break from a tour in order to jump into a studio and produce another album. But the idea of, at some point, slowing down long enough to put a full-band effort together kept gestating. They wanted to explore sounds beyond bluegrass, to see how their songs might be able to stretch them in new directions.

By the time they visited Mogis’ studio in Omaha last year, they knew almost instinctively that it would be the place. Though Winter and Lee stuck to the core of their sound on The Perfect Plan, balancing their banjos and vocals, there are a few tracks where they veered especially far from the norm.

On “Morning Light,” for example, Winter played most of the instruments herself while Lee simply added vocals. “We decided not to have banjo on the track,” she says. “That was one we actually did [with] layers and built it up. We had a vocal line that was … kind of an obnoxious vocal line that didn’t really work. We wrote lyrics for that song during the time we were there. That one got fleshed out in the studio. But, most of [the songs] we performed all together with the band, so it was really like, ‘Learn the song and let’s go.’”

“Mike had the demos for a couple of months before we came in,” Lee adds. “He had all sorts of ideas and had some musicians in mind. Then it kind of just happened organically. Kendl and I started playing through the songs and everyone would start jamming. It was pretty awesome.”

Mogis encouraged the duo to bring their own drummer, so they roped in Minneapolis mainstay J.T. Bates (Bonny Light Horseman, Big Red Machine). Fans of bluegrass know well that banjos and drums don’t always mix, as the latter can so easily overpower the percussive tonality of the former. Luckily Bates’ subtlety is so on-point his rhythms seem to follow the duo’s acoustic strings, rather than the other way around.

Lee explains, “On that ‘Wild Animal’ track, for instance, we just started jamming. Rather than drive the song in a particular direction, J.T. was able to find the best way to accent what was already happening.”

“Sometimes as we arrange, we fill up the space according to how we’re going to play as a duo,” adds Winter. “On the one hand, it gives us endless options. On the other hand, it gives us really limited options as to how many different sounds we can do as two people. But I think we left some space on these tunes to let people be creative. We didn’t want to get in there and have too strong an idea [of how everything should sound] because we knew Mike was magic and we wanted him to have a voice in it.”

Thanks to this somewhat laissez-faire approach, the arrangements are deeply intuitive, an extension of the intimate pairing of the duo itself. Rather than drown out the delicate subtlety that makes the Lowest Pair such a stirring band in the first place, The Perfect Plan centers the duo well and allows their unique vibe to lead the way.

The result is so sonically pleasing, it can be easy to forget there are so many people in the room behind the group. Winter and Lee had planned to pull that studio band together for a few live dates once the album dropped, but that part of the release schedule is on hold for now. Luckily, there’s plenty of richness on this album to dig into in the coming weeks.

But if The Perfect Plan is the album the Lowest Pair has been building up to for years, don’t mistake the duo for having hit their stride.

“A stride implies it was kind of smooth,” says Winter, provoking laughter from her bandmate. “I think we just got hooked on each other and the project has a momentum. I think we just kind of rolled into a lifestyle where this is what we do.”