By Defending Her Own Happiness, Joy Oladokun’s Determination Pays Off 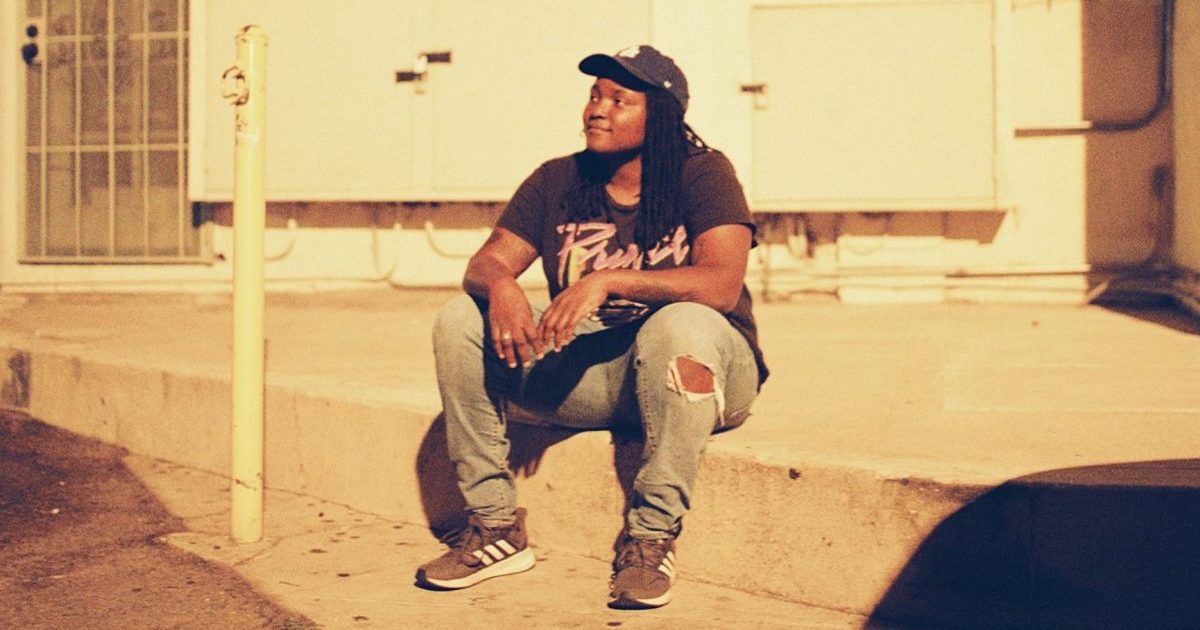 It was far from a given that Joy Oladokun would settle on her present path as a singer-songwriter of pensive folk-pop. She absorbed an array of musical models earlier in life — those that culturally linked her family to their Nigerian roots; reflected the rural pride of her peers in agriculture-rich Arizona; united her evangelical congregation in upward-aimed worship; and offered various styles of self-expression, emotional catharsis or social critique.

But on her texturally varied second album, in defense of my own happiness (vol. 1), much of which she self-produced, she sketches the distance between where she stands, sorting out her sources of pain, anxiety, and pleasure, and what she’s chosen to leave behind. Throughout, she’s exploring knotty interiority with warm yet watchful vulnerability. Oladokun paused her daily songwriting schedule to talk with BGS about how she made her way here.

BGS: After your parents immigrated to the U.S., did they maintain an attachment to traditional or contemporary Nigerian music and share it with you?

My parents came here in the ‘80s, so the Nigerian music they listened to growing up is definitely still a part of their everyday life today. I think one of my first introductions to the guitar was this Nigerian artist named King Sunny Adé, just these crazy, cascading, arpeggiated guitar riffs. They’re not as in touch with contemporary Nigerian music, but Nigeria had a pretty rich and interesting musical history.

You’ve said in past interviews that you grew up in an Arizona farming town that prized folk and country music. What role did that music actually play in community life?

There is not a music scene to speak of in Casa Grande, Arizona, that is for sure. My high school was big into Future Farmers of America. Lots of big trucks and dairy farms, that vibe is the vibe of my town. Some of the country I wasn’t very interested in, but I had a short fascination with ‘90s country. I mean, Martina McBride, Alan Jackson, Brooks & Dunn, it’s a lot, but in a good way. Everyone around me was listening to ‘90s country.

And my dad, for some reason, has an affinity for country-gospel music. He has all these records of Johnny Cash or Charley Pride, all these different people singing old country-gospel standards. So there’s this dusty, Southwestern country sound that I also grew up around that I think is the country that I gravitate to now, more than the big trucks and farms.

Along with hearing King Sunny Adé’s playing, you’ve said that seeing concert footage of Tracy Chapman with acoustic guitar in hand really caught your attention. What was it about those moments that moved you to pick up the instrument yourself?

I was always a really shy and reserved kid, and pretty smart, but had a hard time focusing or applying myself for long amounts of time. I think what I found in myself when I saw the guitar and decided to learn, and what my family saw in me, was a determination that hadn’t been applied to anything else ever.

I just know that the gift of self-expression that it’s given me has been pretty lifesaving. King Sunny Adé and Tracy Chapman, those are two very different expressions of how to use the guitar and how to make music, but they both took the inner workings of themselves and the world around them, and they expressed it through the music they made. I think that’s pretty dope and especially appealing to a kid who has a hard time talking.

Since you were so shy, how did you wind up playing music in front of a congregation?

If you wanted to get me to do anything as a kid, convince me that it would make God happy, or if I didn’t do it, God would be upset. That’s a pretty good motivator to any kid, but especially for me. I think I was so driven because I was so enmeshed in Christian culture. I was driven by this narrative of, “You need to do something big with your life and you can’t just spectate. You have to participate.” I honestly think had I been a little atheist in middle school, or had language been different, I maybe wouldn’t have ever done it or stepped on a stage. But I think it was the, “I feel this duty to use my gift for something bigger than myself.”

What did it take for you to leave behind what you thought might be a lasting career path in praise & worship music?

I often laugh at how much my adult life parallels my mother’s. Growing up, she would always tell this story about how her dad really wanted her to be a teacher. She spent a year or so teaching school and freaking hated it. So she became a nurse and she still does that to this day. I think I honored the thing that is spiritual in myself by working at a church and by falling in line and doing the thing for as long as I did. When I realized, “OK, I’m queer. There’s no getting around that. And I maybe don’t believe these things politically or theologically that I sometimes said on a day-to-day basis.”

I just got to a place where it became more important for me to live a life of integrity on all fronts than to keep up appearances or do what I thought God or my parents or my old boss wanted me to do. When I left, I made the decision pretty much on my own. And in circles like that, that is a no-no. I think the reason I did step into it by myself, though, is because I have to live this life. I would rather pursue something that feels more authentic to me. And once that decision was made, then the career decision was easy. I honestly tie it back to hearing my mom every day since I was born tell the story of how she made that decision for herself.

These days you’re signed to the Nashville office of a publishing company, operating in a world with its own customs and practices when it comes to being creative and collaborative. How’d you adjust to things like co-writing?

I honestly don’t think the worlds are that different, or maybe just people are the same. I do write a considerable amount by myself, so co-writing was maybe the biggest leap that I’ve made into discomfort. To me, even if I have a bad session, there is something that can be learned or gleaned or laughed about from it. If someone has a bad ego during a write it’s, “OK, I’m not going to work with that person again.”

You chose a loaded title for this album, in defense of my own happiness (vol. 1). What were you getting at?

Every time I post something on Instagram or Twitter or Facebook that someone from my past dislikes, I hear about it. I didn’t realize that that was a strange practice until I was talking to my girlfriend. She was like, “That’s so bizarre that people you worked with five years ago still feel the need to tell you that they’re disappointed in you, or say that they’re praying that you’ll become straight again one day.”

It is the source of a lot of my anxiety, to be honest. I don’t regret anything that I am or anything that I’m doing, but there’s this part of me that wants to defend that who I am is good. So many of the songs we ended up picking for the album speak to that. I think the idea of in defense of my own happiness is, it’s maybe an open letter to all these people.

Also it’s a letter to myself saying, “You deserve this life. You deserve to have a girlfriend who loves you and live in a beautiful house, and you deserve to be working a job that you enjoy. You’ve made mistakes, but none of that disqualifies you from what you found.” The album is literally just, “Please let me live.”

As much as I hear you insisting on your right to happiness on the album, I can also hear you sitting with your melancholy, and not hurrying past it.

I don’t know that there’s any other way to actually be happy or healthy without acknowledging how you’ve been hurt in the past, who you’ve hurt in the past, acknowledging the things that you don’t understand or the things that scare you, and sitting with them. I’ve been doing a lot of meditation, because it’s 2020 and the world’s on fire. I was reading a quote about how emotions and our thoughts, we should entertain them as friends, as opposed to treating them as these things that we can’t control. I do feel like melancholy is like a friend that I entertained on this record.

That definitely applies to your song “Who Do I Turn To?” Tell me about the choice you made to phrase the chorus as one long, uncomfortable, unresolved question.

I credit the open-endedness of it to Natalie Hemby, who I wrote the song with. I am a big fan of open-ended things, but I think I wanted an answer. I wanted to write a protest song. I think Natalie could see in my face just the heaviness and the sadness. I was, like, four months old when the LA riots happened, and the fact that we’re still marching for the same thing in 2020 is so bizarre. It’s so heartbreaking. Black people have been showing up for themselves from the beginning of time, countless Civil Rights leaders and movements.

Even to this day, you can point to people like Angela Davis that are alive and doing the work. But we are a minority group, so we cannot be the only people doing the work to protect and honor our lives, especially in this climate. It became open-ended because it’s like, “You keep saying that it’s not your fault, but you let your grandpa make racist remarks while I’m at dinner.” There’s all these little actions and behaviors that play into it. Leaving it open-ended just allows people to think and reflect.