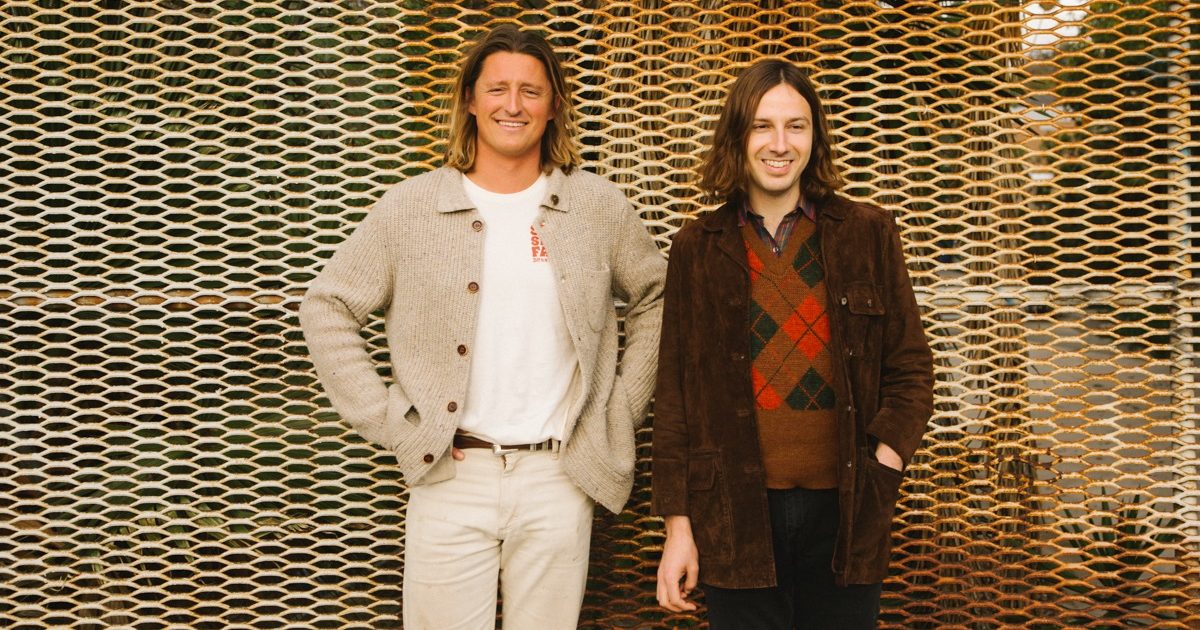 Since the friendship between Clay Finch and Sam Blasucci began as kids, Blasucci’s Boston Terrier Roscoe has been in the picture. So, when it came time to record their third original album, the duo that make up California jam-folk band Mapache felt it was only right to pay tribute to their four-legged friend and sometimes tourmate. Roscoe’s Dream, out June 10 on Innovative Leisure, finds Finch and Blasucci zeroing in on the dreamy, sun-drenched California sound that reared them in La Cañada Flintridge, a small town north of Los Angeles at the foot of the Verdugo Mountains. Golden State influences like the Grateful Dead and The Byrds can be heard in Mapache’s loose guitars and warm harmonies, a tailor-made soundtrack for barefoot dancing and frosty beers.

Roscoe’s Dream is a jampacked double album that begins and ends with, well, Roscoe. The coming-of-age love letter “I Love My Dog” and the sweet instrumental title track (complete with Roscoe’s bark) bookend a collection of tunes that range from romantic, Spanish-language swooners like “Nicolette,” soft folksy ones like “Tend Your Garden,” and twangy stoner grooves like “Pearl to the Swine.” Two covers, Bo Diddley’s “Diana” (1962) and Gabby Pahinui’s “Kaua’i Beauty” (1973), though far apart in terms of genre, come together as album highlights under the Mapache sound umbrella.

BGS: This album feels, in a celebratory way, like festival music. It’s really jammy and there’s a real easy breezy California aesthetic. How much does California—being from there and now making most of your music there—impact your sound?

Sam: The environment and the landscape is probably the biggest thing that would influence how your music sounds, other than the actual music you listen to. So where we live, geographically, sort of is unescapable when we’re trying to write music because you can’t really write anything other than that. It just comes out in a way that’s affected by what you see all around you, where you live.

Clay: We’ve also embraced that culture. We really love it, the environment and the culture. We were fortunate enough to grow up here and it’s something we’ve embraced because we love it. I think Grateful Dead is a pretty quintessential California sound and that’s definitely been a big part of our friendship and musical development. But there’s so many bands you would put in that classic California category and those have all been artists that are important to us, too.

There are a few Spanish-language songs on the album, which also feel emblematic of the California sound. Are you both fluent in Spanish? How did those songs come together?

Sam: We’re pretty good. I’m fluent because I lived [in Mexico] for a couple years. Living [in Southern California] you get pretty good at Spanish either way if you’re out there talking to people. As far as using language goes, it opens up a lot of doors that are sort of inaccessible when you just speak in the one language that you grew up speaking. Because words have different meanings, or double meanings, and also the way the words are pronounced as far as phrasing and writing melodies and just stringing poetry together, it’s a lot broader when you have a whole other language to use as a vehicle.

What is your relationship to bluegrass music, if any? Do you count it as one of the influences in your sound?

Clay: It’s definitely an influence on our sound. We both grew up listening to it, and even though there might not be too much straight-ahead bluegrass music on the most recent record, it’s definitely a large part of what we digest, or have been, over the last 15 years of listening to music.

Sam: The Stanley Brothers were really big for both of us.

Tell us about Roscoe, the album’s namesake. Does he like the new songs?

Sam: I think so, yeah. I’ve had him for 15 years now and—this is Jack, another dog that we love.

(They pan the phone camera to a dog sleeping deeply on the floor beside them.)

Clay: Oh yeah, this is Jack. This is Roscoe’s archnemesis.

Sam: I think “I Love My Dog” and the general public appreciation for Roscoe came from just trying to be as honest with the songwriting as possible… It was sort of the most honest thing to say at that time, was how much we loved the dogs because they were so present in our lives.

Clay: Maybe more than our love of music is our love of laughing at dogs and pictures of dogs making funny faces. And Roscoe is a hilarious dog, so it was an opportunity for us to continue sharing pictures of him, but now on a broader level. Sam, since he was like 13, has been showing me funny pictures of Roscoe mid-conversation.

(Sam pulls out a photo of Roscoe posing like it’s school picture day.)

Yeah that’s a human in a dog costume.

Clay: Bringing him closer to the music is mostly just an extension of our greatest love, which is the joy of laughing at dogs.

Sam: Someone said the other day, “That’s the dog from ‘I Love My Dog!’”

What can you share about the sound effects on the record, like cards shuffling (“Así Es Le Vida”), something that sounded like dolphins or seals (“They Don’t Know at the Beach”), and Roscoe’s barks at the end?

Sam: Roscoe does that whenever someone knocks on the door anywhere, so we had someone record him and then put it at the end of that last song.

Clay: The other sound effects are a secret. It’s seals, but we can’t tell you where they came from. We don’t want to get in trouble with animal rights people.

You recorded at your usual spot, Dan Horne’s Lone Palm Studio in Echo Park, Los Angeles. Is that home for you at this point?

Clay: We used to live there, at the studio. For a couple years we lived in the house where the studio is.

Sam: That’s a quality that is kind of rare in recording studios and environments where everything is go, go, go, and get as much done as you can because time and money is limited. But with Dan it was always taken at a pace that was really organic, which I think made all the songs work the way they did.

Clay: We had so much time because we were actually in a pod. That was gnarly pandemic times so we couldn’t break the pod and we had nothing else to do besides hang out with Dan. He couldn’t record anybody else. We feel really comfortable there and Dan is one of our best friends. He’s almost like another member of the band, too, with all he’s contributed recording and then also playing bass on a lot of stuff. The relationship is easy, as opposed to some random guy you don’t know named like, “Eric” or something. And you’re like, “What’s his name again?” Sometimes it moves a little bit slow because we’re buddies. Like maybe “Eric” would set some shit up beforehand or not bail to go feed his children or something.

Sam: “Eric” if you’re listening, you can contact us.

Sam, you recently moved up to Ojai, and Clay, you moved to Malibu. How has it been living apart and still finding time to play and write together?

Clay: Mostly it’s just draining our bank accounts. We still see each other a lot but we just have no money because we’re constantly filling up our cars to drive across Southern California.

Maybe that could be good meditative time to write.

This album seems like it will be a blast to play live. What’s the setup looking like for the tour?

Clay: We’ve been doing one acoustic set, then taking a short break, and then playing with the band. That’s something we’ve always wanted to do and it’s something that a lot of artists that we’ve looked up to have done. Mostly it’s the best way to try to play all of that music. There are some songs that we want to play acoustic still, that we don’t want to put into a whole band format and vice versa. For example, some of the Spanish songs, we don’t want to play them with an electric band. It just wouldn’t sound the way we would want it to sound. And then we’ve also been playing some of the older acoustic songs with the electric band so we can breathe some new life into songs that we’ve been playing four or five years. It just gives us a lot to play with, having two different sets like that. We’re not the kind of band that wants to dial in a perfect show that is rehearsed and rehearsed. We try to do a different set list every night.