Chris Pierce Writes an Anthem for the Young, Black, and Beautiful 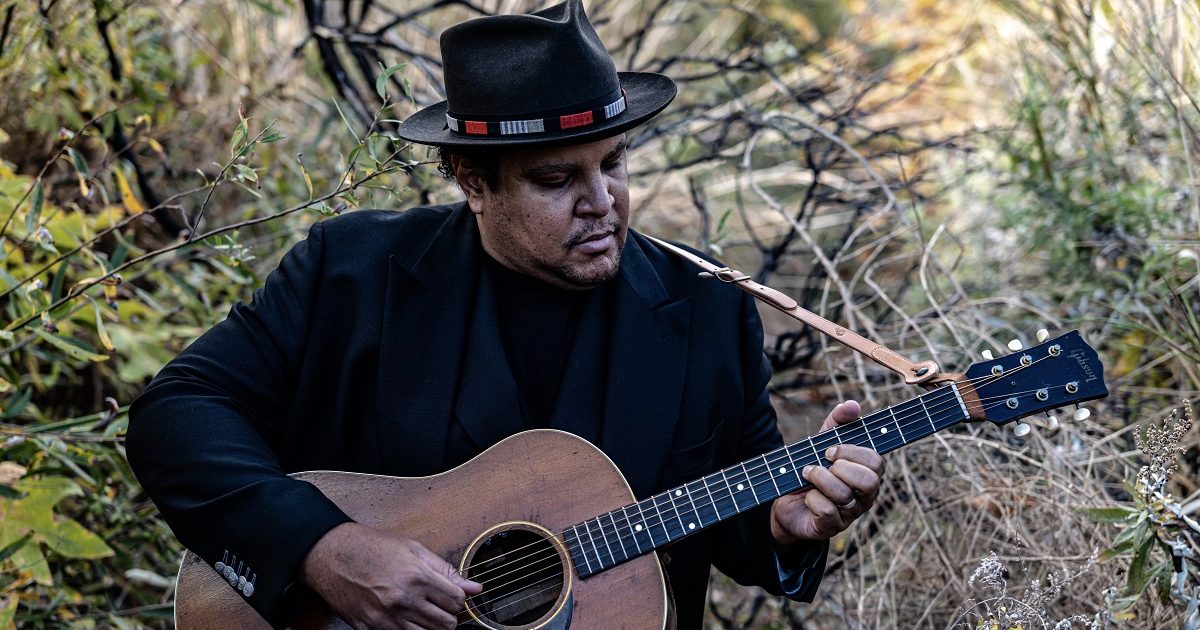 Chris Pierce has cultivated a significant following in the Los Angeles area and beyond, usually writing soulful and emotional songs that have populated fifteen years’ worth of albums and appeared in TV shows like This Is Us. But in 2020, accompanied by little more than his 1949 Gibson J-45 (“Blondie”) or his 1973 Martin D-18 (“Doriella”), the California native recorded the album American Silence with a mission of social activism against racial disparities.

Pierce gained a love of language from his mother, an English teacher who taught at-risk youth. She introduced him to the lyrical writings of Shel Silverstein and Dr. Seuss, as well as essential writers like Langston Hughes and Walt Whitman. The economy of words in all of those authors is immediately evident in original compositions like “American Silence” and “It’s Been Burning for a While,” where Pierce gets his point across directly, and with power. His convictions are never more optimistically presented than in the album’s closing anthem, “Young, Black and Beautiful,” which details the experience of maturing from a cute little kid to a perceived threat.

Calling from Los Angeles, he had a lot to say about American Silence, which is poised to become one of the most resounding folk albums of 2021.

BGS: To me, “American Silence” is like a message from a folksinger to an audience. What was on your mind when you wrote the song?

Pierce: History and resilience, and that cycle of bad things happening and people becoming aware of those things. Jumping on the train of, “Let’s try to end this,” and doing what we can to create awareness about a problem. And then kind of fading away. That song, for me, I was thinking about being young and cuffed on the streets, and stopped for things, and how being a Black kid – and now a Black man – can sometimes feel like a crime in itself, just walking around.

I wanted to write a song that addressed complacency, and remind people like myself, and Black people, and anybody’s been oppressed, to never give up. And also, to remind songwriters and artists that it’s important to not give up on reaching out to people, even though it’s sometimes hard. It’s important to keep that fight going in whatever way you can. And it asks those folks: “Hey, you come to my shows, you say you support, but if something were actually happening to me and you saw it, would you do something? And are you willing to do something in your everyday life that would create a more positive experience for people who aren’t like you?” That’s the short answer. [Laughs]

What has been the response so far?

It’s been getting good response from folks who have had my albums through the years. I’ve been getting emails and notes, and I’ve gotten to speak for a couple of schools, which is great. I’ve been invited to speak at events and play songs, and I think it’s doing a little bit of what I wanted it to do — which is to open up the continued conversation. And through a song, let it be another reminder to not let this moment, and these horrific things that happen, and how appalled you are by them, fade into the distance.

Does it change the vibe in the room when you walk in with a guitar?

Yeah, you know, I’m not a petite individual. I’m 6’4” and I’m a big man! And I’m a Black man, and I think walking into a room with a guitar raises a few eyebrows, to where folks will want to listen to a few lines and open their hearts, and to hear what I have to say. It’s being a gentle giant — a man of stature and size, and having this sensitive heart. In a lot of ways, the core of who I am is somebody who really wants to make music and make a difference and spread love. To get into a room with a guitar and sing about our history, and some of the ways I think we could change for the better, is thrilling for me. I’m really looking forward to walking into more rooms soon to play live. I miss it so much!

“Sound All the Bells” is a call to action, too, but it’s also very personal. What’s that like for you to put those experiences in a song and then share it with people?

All of the songs from this album came out of me last year, and for me it was a moment of clarity. Here I was, at home, trying to be safe and responsible, and in a lot of ways being still forced my heart to open to some of these compartmentalized feelings that I tucked away over the years to survive – and face them in a way that I’ve never faced them before. …

“Sound All the Bells” is almost like a timeline through different experiences that I’ve personally gone through, but it also offers the message of, “You know, I consider myself one of the lucky ones, for getting broken ribs and thrown in jail and stabbed and shot at – I’m still here, to sing songs.” So, I want people to really consider that perspective, in hope that it encourages them to do something about it.

One of the lyrics is about seeing a cross burning in your yard when you were 5 years old. That’s a powerful image.

Yeah, throughout the years I’ve had little flashes of memories about that. And a couple of years ago, I was sitting at lunch with my mom, in the town where that happened. We were talking about how things have changed over the years, and she started walking me through exactly what happened, and what she and my late father felt, being the first interracial couple in the neighborhood and the pushback from that. That wasn’t the only instance of hate that they encountered. And once I came along, there was this protectiveness from both of them, having a young child.

When that happened, from my mother’s perspective, it was something that [told them] they had a choice. And their choice was to be strong and to carry on and stay in the house, and try to be an example of love and acceptance. And that’s what they did. I’m so proud of them. It’s one thing to go through that when you’re a kid, but it’s another thing to imagine young parents having that happen. I feel like, in a lot of way, that example of their strength and resilience carries on into who I am, and the kind of music I make. And just the fact that I keep going is part of that moment.

On this record, it’s essentially just you and the guitar. Why did you choose that approach?

A big part of it was the pandemic and wanting to be safe and responsible, and not add to the problem of people getting sick and dying. It made me want to set up a session like this. And the other thing was, I wanted the listeners to not have anything in the way, and to let the words sink in. I have some extremely talented friends and folks that I’m around that are incredible at their instruments, but instead of picking up the phone and calling them, which was very tempting, I just said, you know, let me sit down with a guitar and sing these truths. Sing them in a way that means something to me and see if that translates.

“Young, Black and Beautiful,” feels like an encore to me. You’re closing the album with a message of encouragement, and I think the strength of your voice is part of that, too. Why did you want to end the album with that song?

The song in general was inspired by reading a friend’s Instagram post. She was talking about her Black son and how he was getting to the age that instead of folks on the street saying, “He’s so cute,” it’s turning into folks feeling threatened by him. That got me thinking about my own history, and what happens in that pivotal moment as a Black child that people are starting to look at you differently. You start hearing doors lock and you see purses clenched, and people walking to the other side of the street.

And at the end, I wanted to hold the word “Black” as long as I could, to give an example that you should never be ashamed of your Blackness. Sing it loud! And give folks as many examples as you can of your authentic self. And walk on through all these things that you’ve experienced, and that I’ve experienced, and find a new purpose in each days, knowing that your authenticity makes you beautiful.