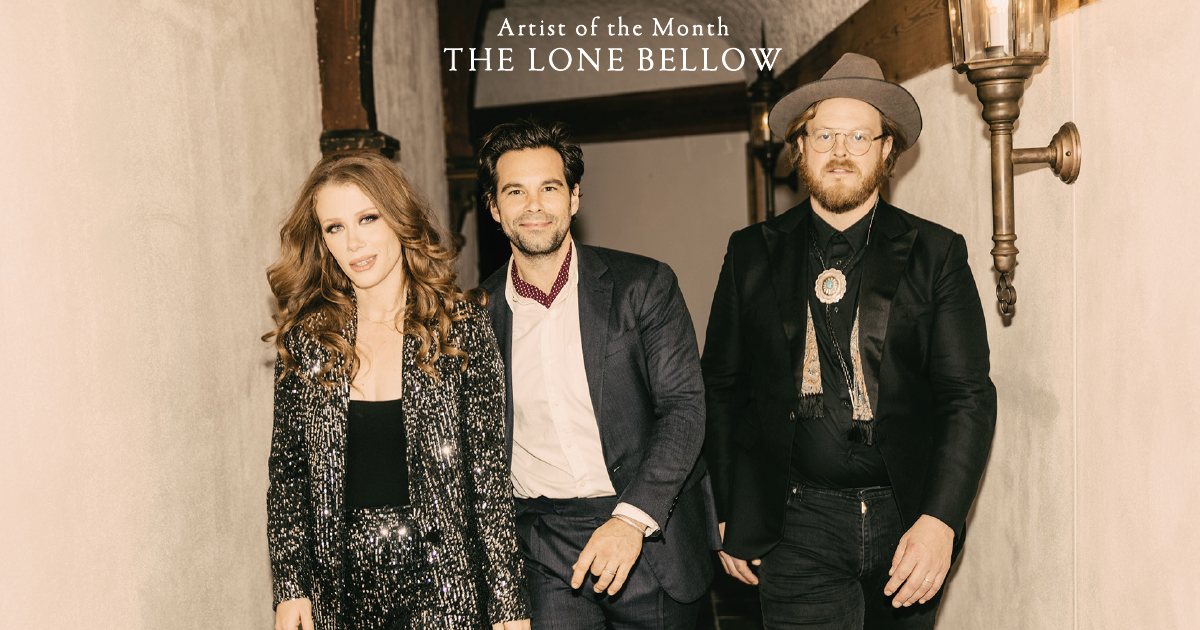 It’s been nearly 10 years since The Lone Bellow — Zach Williams, Kanene Pipkin, and Brian Elmquist — arrived on the scene with their excellent self-titled debut, stunning Americana audiences with rich, adept harmonies and poetry born of vulnerability, loss, and hope. Since then, the band has managed to maintain the stop-you-in-your-tracks vocals and thoughtful lyricism that made their debut an instant classic. But they’ve also explored new sonic territory, adding a rhythm section (drummer Julian Dorio) and bass (Jason Pipkin, who also contributed banjo, mandolin, and synth) to round out their sound. “The tour that we’re on right now is such a wonderful boom basket—a full-throttle, five-piece band tour,” says Williams. “We’re not a trio around one mic.”

Self-produced by the band and recorded at Roy Orbison’s former Nashville home, Love Songs for Losers is the Lone Bellow’s first release recorded with the full touring band. It captures a musical energy that longtime fans will recognize warmly—and if you love it, don’t get too hung up on the “losers” part. Lyrically (and titularly), the album is meant to touch on those emotions that feel too big, too overwhelming, to do justice with words or gestures. “When it comes down to that moment when I want to express how much I love somebody, even my family, I usually don’t have the words for it,” says Williams. “But I think that it’s kind of beautiful that words fail.”

“It’s as simple as this,” adds Elmquist. “I’m in what I consider to be a happy marriage, with kids, and I need Love Songs for Losers all the same. We all don’t do it well! We’re all kind of in the same boat together.”

BGS caught up with Zach, Kanene, and Brian last month about recording the album, writing tough topics, and the importance of family. Read the interview below.

BGS: Why did Love Songs for Losers feel like the right title for this collection of songs?

Kanene: Well, we were just going to name it Love Songs. That was the working title, but it didn’t feel accurate.

Zach: It started out as kind of an inside joke while we were making the record, and I can boil it down to the lyrics of “Unicorn.” The lyrics are basically saying that words sometimes fail you when you’re trying to tell someone how much you care about them. That ended up being kind of the overarching theme—it’s an in-case-you-feel-the-same kind of record title.

You’ve worked with some all-star producers in the past, such as Charlie Peacock, Dave Cobb, Aaron Dessner. What was it like stepping into that role yourselves for this album?

Brian: We learned a lot just from being in the rooms with those people. But we also felt like producers had never quite gotten all of our personalities on there, so we really wanted to take that stab at it ourselves. They were big shoes to fill—and there’s nobody to lean on. You can’t go, “What do you think, Dave Cobb?” And then say, “Hmm, I don’t like that,” make the decision together, and then turn around and have the grace not to tear each other’s faces off if we didn’t like the decision. But at the end of the day, it was a pleasure [to self-produce Love Songs for Losers]. You just get to know your bandmates better. You realize that you like what you do, and it’s still getting you going. It’s still inspiring you. And after being a band for 10 years, that’s a super important thing to do. It still needs to be fun.

Was there a moment or creative decision that felt specific to your style as producers?

Zach: There were several of those moments. One of the things that happened is we were able to make more time for the vocals. You would think that we would always do that, but even with these amazing producers that we’ve worked with, who we love, the time would run out and we’d have concentrated on all of the guitars, and the drums, and the keys, and all of that. And then they’d be like, “All right, y’all get in there and sing the song.” This time around, we were able to really spend a lot of time on that part.

Kanene took the reins and did the vocal production, and it was really, really fun to take her guidance and leadership on that. Brian’s always had strong opinions whenever we’re making records about music, so I loved watching him blossom. And believe it or not, it was the first time that we had our rhythm section, the rest of our band, play. So having Julian Dorio on the drums and Jason Pipkin on the bass was great.

You recorded this album in Roy Orbison’s home. How did that come about, and why did that feel like a fit for this material?

Brian: I think the word is serendipitous. We had written all these songs, and [the home] just fit the Love Songs for Losers vibe—Roy Orbison, crying, always writing sad love songs. This all kind of fell into place pretty perfectly.

Zach: I mean, it was such a fun story how we even found the house. There’s this one builder that built 55 houses in his lifetime around Nashville: The majority of the houses he built were for the mega country stars, and several of them burned down—he would build them out of old material, out of old cabins and this and that. I got way into his work. I found his widow and she sat me down and told me stories for hours. The Roy Orbison house is a huge, mysterious, beautiful old house that’s probably 7,000 square feet. There are only two bedrooms, and both are probably 400 square feet a piece. The rest of the house is just massive party rooms, just debauchery. And I feel like the physical location where we made the record definitely seeped into some of the sound. “Unicorn,” for instance, definitely has that backbeat.

Tell me how “Gold” came about. You talk about some really difficult topics there—addiction, feeling stuck. What inspired it, and what did you really want to get right when you were writing it?

Zach: I’ve got family members that have been stuck on opioids for decades now. I’ve watched their eyes deteriorate and nobody talks about it. And I think what we were trying to do was use that familiar language of a song that’s talking about small town America, but in a way where we’re kind of pulling up the rug a little bit: Saying, yes—Main Street, Johnny, parking lots—but also Johnny put the paycheck in his arm.

Were you influenced by any other songs or artists during that process?

Zach: I mean John Prine did it, really: “There’s a hole in Daddy’s arm where all the money goes.”

Brian: Me and Zach are both from small towns. We’ve seen this, and we haven’t talked about it a lot. I’m very, very proud of that song and the recording of it. It started as a folk song, but when we got to it, it was more fun to make a new Springsteen song: “Born in the USA” is a sad song. But everybody kind of carries the sadness together.

One thing that I’ve always really admired in your music is that family seems to have always maintained the most important role in each of your lives. How do you maintain that North Star of sorts, especially with the taxing nature of touring and life as a professional musician?

Zach: For me, it’s always a sense of ownership my family has for the work that I do. My kids know that their opinions matter when I’m trying to figure out what song I’m trying to work on, to make a record. I want them to feel, like on the road, that they’re a part of that beauty that we’re trying to chase down. It’s not just like, “Alright, Dad’ll be back in a week and a half.” They know that they’re with me. There’s the quality over quantity kind of set-up that we have, too: When we’re home, we’re really home. We don’t have something that’s pulling us down to our iPhones, no 9-to-5, either, when we’re home.

I’ve benefited, really. I mean it might change—they’re in middle school right now and Lord knows what might happen—but last year one of my daughters was like, “Hey, how did you figure out how to do what you love for work?” I was like, “I don’t know.” And she was like, “I want to do that. I don’t know what it is, but I want to figure out how to do that.” I realized that it was really translating. This is a kid who knows that she can’t get everything she wants because I don’t make enough money—and still, she wants that. I love that.

Y’all have been a band for 10 years now. Is there anything that you would go back and tell yourselves a decade ago?

Brian: I’d be like, “Hey, you don’t have to look like you just came out of a coal mine.” [Laughs] But seriously, I think I’d say that as long as your hands are on the plow and you’re doing the work and taking care of your friends, it’s going to be the same outcome whether you get stressed out or don’t get stressed out about it. If you’re doing good work and you’re being honest, it usually pays off.

Zach: When we were first getting going, I carried a lot of worry that was unnecessary. Even though my bandmates were always telling me, “You don’t have to do that,” I just did anyway. I feel like, especially after going through Covid, losing everything, losing every way of making money and being worried, just hitting rock bottom and seeing that we were still okay, we kind of came out of that with a fresh new outlook on our work, and on our connection with each other, and our band. And I feel like we’re just now starting to see the fruits of our labor.

Kanene: I think for me it’s, “Have a thick skin and a short memory.”

Zach: And always make fun of each other. I think that’s important, too.