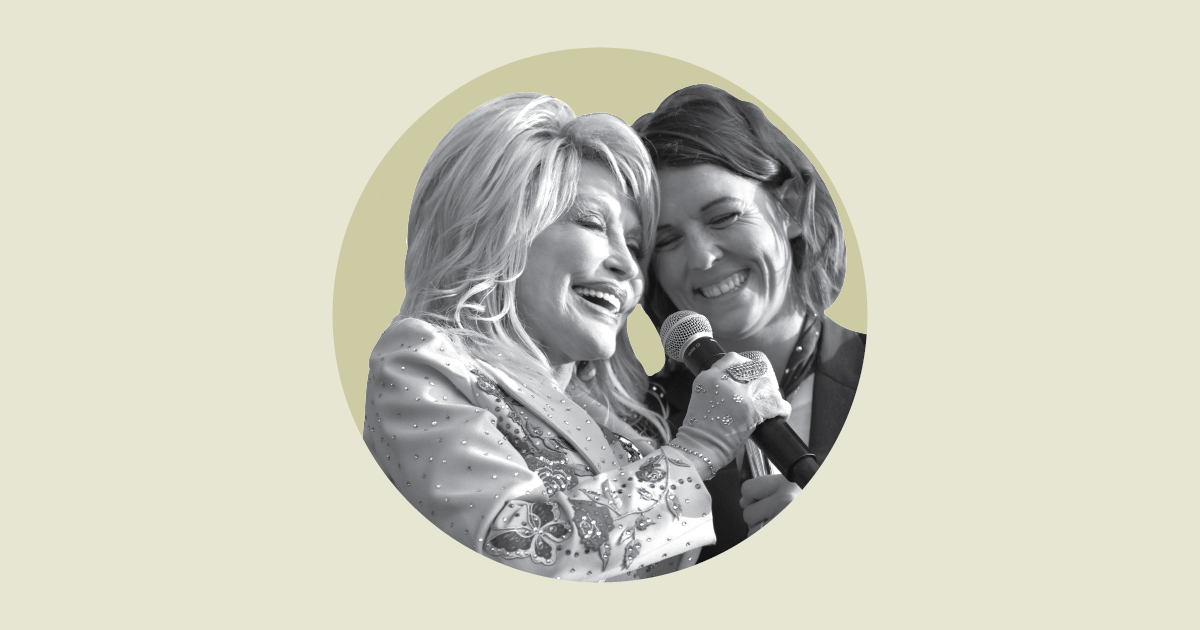 There are a whole lot of ways you can tell the story of 2020, but for us here at BGS, it will be remembered as a year of especially remarkable songwriting from women in roots music.

We lead our playlist with the one and only Dolly Parton, who assured us that life will be good again. Parton’s songwriting is presented in an enticing new book, Songteller, and her ability to articulate complicated emotions — through lyrics that speak to all walks of life — is something that Brandi Carlile picked up on as a teenager. In this video interview from the 2020 BMI Country Awards (with a cameo from Dolly at the end), Carlile explains how Parton’s perspective on equality kept Carlile from divorcing country music completely.

Parton, who turns 75 next month, shares a number of important qualities with a new generation of singer-songwriters she’s inspired. In the case of Brandi Carlile, there’s a sense of belonging that is woven throughout their work, from Parton’s “Joshua” to Carlile’s “Carried Me With You.” Like Parton, Brennen Leigh is able to capture a sense of place and make it relatable, even for a listener who’s never been there. Kyshona Armstrong offers a sense of self-worth and self-awareness in her writing, as Parton does, allowing listeners to know them better. Likewise, Maya de Vitry and Parton share a sense of wonder and joy, portraying landscapes — internal and external — that are imagined, yet vivid.

On Prairie Love Letter, her full-length paean to her homeland on the Minnesota-North Dakota border, Brennen Leigh demonstrates a visceral, evocative grounding – just as Parton constantly speaks of her Tennessee mountain home: with a glint in her eye, and a sorrow in her heart for knowing she had no choice but to leave it. Leigh stakes her claim on both the wide, expansive plains and Nashville all at once, asking her audience “Don’t you know I’m from here?” As if to remind she’s as at home in bluegrass and country — and Music City — as Dolly herself.“Backwoods Barbie,” “Dumb Blonde,” and “Just Because I’m a Woman” are all perfect examples of Parton’s lifelong radical self-possession. She expresses her agency boldly, confidently, without (visible) second guessing – from her wigs to her infamous tattoos to her nothing-special acknowledgement of her plastic surgeries, struggles with suicidal ideation, and so on, she is her fully realized, autonomous self. As Dolly told Jad Abumrad on Dolly Parton’s America, “Who we are is who we are… I would just bow out if I wasn’t allowed to be me…” Kyshona Armstrong‘s prescient album, Listen, holds similar space, as Armstrong doesn’t simply ask folks to listen; her presence, compassion, and radical honesty demand it. Because, first and foremost, she’s welcoming and non-judgmental in that aim, you will find yourself fully enveloped by her music before you realize the conviction within it.Maya de Vitry made a gorgeous, poetic foray into heavier, rockier turf with How to Break a Fall, a gutsy, genre-bending set of songs. Their anger, release, and passion, expressed by the folk-rock production style, feels right out of Parton’s post-White Limozeen era, an effortless combination of seemingly disparate musical influences, distilled into something that, almost above all else, feels joyful. Where male-centered rock and roll finds itself often hung up on its endemic toxic masculinity, de Vitry and Parton stride into electrified sounds with their femininity forward, and the result is as charming as it is subversive.

It’s striking, among such an incredible volume of musical output from their Americana and country peers this year, that these women would stand out, above and beyond the still-common glass ceilings imposed upon them for decades. Dolly blazed a trail, but these dozens of writers — and singers and pickers and composers and front women and side musicians and authors and poets — would have crashed through inevitably on their own. With songs like Adia Victoria’s “South Gotta Change,” Sunny War’s “Can I Sit With You?,” “Troubled Times” from Laurie Lewis, the Secret Sisters’ “Cabin,” it’s obvious Dolly Parton’s songwriting legacy will be inherited by multiple generations worthy of carrying it on.

Throughout 2020, the BGS editorial team embraced this wealth of excellent music from women songwriters in roots music. It has been a privilege to share these original voices with our readers, too. Here are 50 of our favorite tracks from 2020: