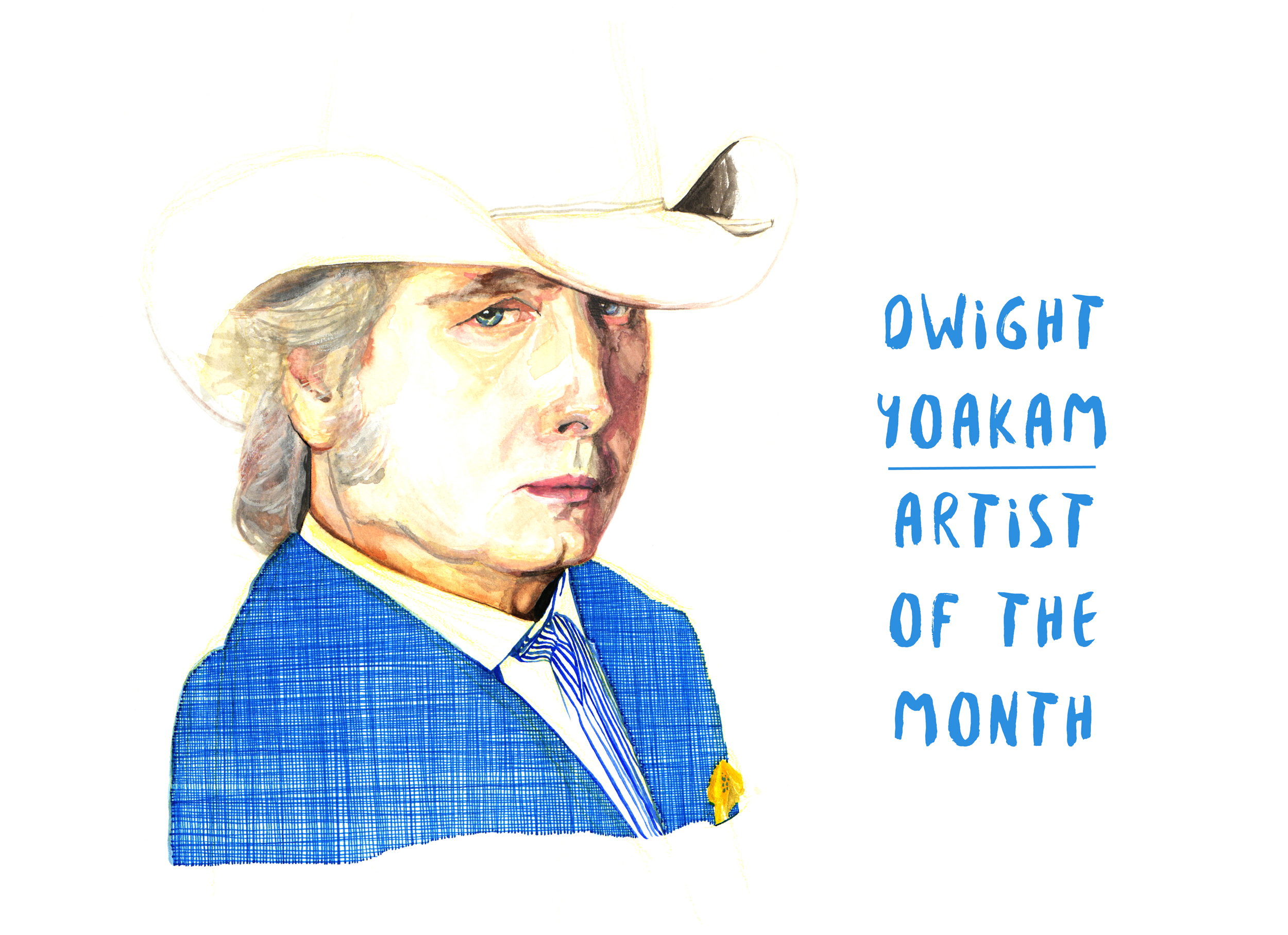 Country music got to know Dwight Yoakam through radio stations and multi-platinum records, witnessing his distinctive style cut through the Nashville machine in a way that was nearly impossible to ignore. He debuted with 1986’s Guitars, Cadillacs, Etc., Etc., landing the first of three consecutive number one country albums and, over the course of his genre-pioneering career, Yoakam has sold more than 25 million records, charted 22 Top 20 singles in Hot Country Songs, won two Grammy Awards (and been nominated for 19 more), and landed nine platinum or multi-platinum albums.

But Yoakam’s introduction to country came up through hollers and Kentucky living rooms rather than with splashy records or big best-sellers. “Here's the thing: I was born in rural, southeast Kentucky, in Pike County. Bluegrass is in your DNA, when you're born there. It's mountain music,” he says. His earliest memory of music doesn’t involve old records or radio shows, but rather Yoakam remembers traipsing up the mountain with his grandfather on Sundays after church and listening to music made alongside ‘coon hunting. “It looked like it might have been an abandoned mining site — a coal mine site that had been left to flood back into a fairly good-sized lake. There were guys walking around with their guitars, banjos, mandolins, playing in small groups, just walking up to one another and just starting to pick. They were out there playing bluegrass face to face with one another. I had exposure to that very young in an absolutely pure way.”

Yoakam’s background in traditional bluegrass and an early affinity for the classics led him to a few starstruck moments throughout the course of his career, some of which hinted that he might be suited to embrace a bit more twang in his regular rotation. Most notably, he recalls recording with Earl Scruggs on 2001’s Earl Scruggs and Friends.

“I was there in the studio in L.A., with Earl and the band were just warming up. Earl and I were playing back and forth and I started playing a melody that came to my head. Earl started answering me on the banjo. Here I am, sitting close to the Jimi Hendrix, if you will, of bluegrass banjo, right? The godfather of modern bluegrass banjo,” he says. They’d originally sat down to record a platinum Scruggs single Yoakam frequently covered, "Down the Road.” But Louise Scruggs came into the studio when they were still fiddling around with Yoakam’s melody of the moment.

“She said, ‘I believe you need to record this.’ I said, 'Louise, it's not really a song.' She goes, ‘Well we need to record it.’ By that point, I was singing some consonants and vowels, which is what I do as a writer when I sneak up on a song. It became the song, ‘Borrowed Love.’ Louise and Earl Scruggs looked at me and said, ‘Well, you're just a bluegrass singer in disguise.’ I said, ‘Probably so.’”

For a man with bluegrass in his bloodline, it’s surprising to hear Yoakam say so emphatically that his forthcoming record, Swimmin' Pools, Movie Stars — a full-length that re-imagines many of his commercial country songs as bluegrass tunes — wasn’t really his idea. It was Kevin Welk — owner of Vanguard and Sugarhill Records and eventual executive producer on Swimmin’ Pools, Movie Stars — who approached Yoakam’s team with the concept. Label obligations and release schedules got in the way, but when the timing was finally right, the label was ready: Americana super-producer Gary Paczosa and producer/songwriter Jon Randall Stewart committed to the project and had hand-picked an all-star lineup of a band to back Yoakam, too. Award-winning players like guitarist Bryan Sutton, banjo and fiddle player Stuart Duncan, bassist Barry Bales, and banjoist Scott Vestal make a convincing lineup alone and, with Yoakam on lead, the project was bound to go somewhere special. But the producers had landed on something Yoakam hadn’t planned — to re-record his old songs with a new twist.

“Melodically, these songs were predisposed to it — that's what I think Gary and Jon thought,” says Yoakam. “And I've always pointed to that when I did interviews: There's a lot of bluegrass, melodically, in what I write."

Those traditional bluegrass sensibilities were just waiting to bubble to the surface, and they lend a new life to lesser-known singles like “Free to Go” and “Home for Sale.” Even casual fans of Yoakam will delight in more popular numbers like “These Arms” and “Guitars, Cadillacs” with their old-fashioned harmonies and quick instrumentals. Nuances in the vocals on Swimmin’ Pools, Movie Stars are a giveaway that Yoakam isn’t just dabbling in tradition: This is an album he was meant to record. Varying his inflection on old lyrics, his performance feels warm and complementary — at times even reverent — to the harmonies beside him and the deft picking in the backdrop. What gets Yoakam talking fastest about bluegrass music and the “bluegrass way” of doing things, though, isn’t one of his own songs — it’s the record’s album closer and lone cover, a rendition of Prince’s “Purple Rain.”

“We tracked 13 tracks in four days,” he says. “The third day of tracking, I went in and, that morning, when I was getting ready to leave to go to the studio, CNN had breaking news. I happened to look over at the TV and I was in the hotel in Nashville and saw the awful unfolding of the news that Prince had died so suddenly and so tragically, so alone.”

Get a bunch of musicians mourning a genius in one room, and you’re going to come away with some good listening. They worked through “Purple Rain” right there, testing it out and ultimately tracking it live before setting the recording aside.

“Just the moment — it was just the emotion from everybody in the room. I didn't touch the song again for about three weeks,” Yoakam says. “I didn't listen to it. I thought, ‘We're probably not going to put it on the record. It was nice to do.’”

Prodding soon came from Paczosa and Stewart, who had left Nashville before the final day of recording and simply saw the raw recording among the other audio files for the upcoming album. The two producers asked Yoakam if they could try listening to the track for the record. “We played it, put it on, and it was what it is, what you hear [on the record]. In fact, I left the scratch vocal on it. I did a harmony. It's exactly as we played it that day about four hours after everybody heard he died,” Yoakam says. “I think, because of that, it had an emotional expression that you couldn't have in any other moment.”

Many of the moments that foreshadowed Swimmin’ Pools, Movie Stars were similarly off-the-cuff experiments in the studio over the years. As Yoakam verbally picks apart the hours that built up to the “Purple Rain” cover that eventually made the album, it grows clearer that this album fusing his songs with the traditions and the twang that built him was more about him and his roots than he first implied.

“One of the things that probably seeded that moment in my mind was Ralph Stanley,” Yoakam notes. “He cut one of my songs, 'Miner's Prayer,' and I recorded one of his songs, 'Down Where the River Bends.' I had always been a fan of the Stanley Brothers. We cut it, as he would say, ‘in the mountain way,’ with Curly Rae Kline on fiddle. It was done around the microphone with a live band in a circle, playing those songs. They looked at me and said, ‘Dwight, I believe you might be a bluegrass singer.’ I said, ‘Well I guess it's somewhere in my birthright.’”