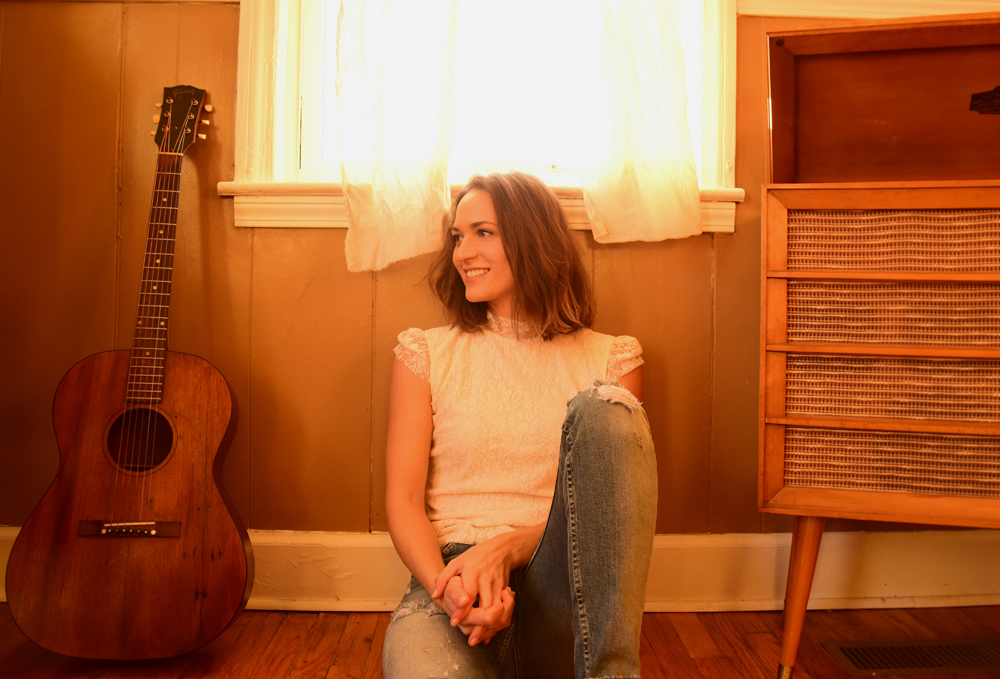 With me today in the Writers’ Rooms at the Hutton … Amber Rubarth. Glad you’re here!

Very happy to be here.

You have so many projects. But let’s go way back, because I feel like you’ve been around a while and done a lot of things, and yet people still don’t really know your story. Does that seem fair?

So, you grew up in California and you went to chainsaw sculpting school, which still fascinates the heck out of me. And then you taught yourself guitar and got into music. How does any of that make sense? Explain it to me. How did you get into chainsaw sculpting as a craft?

I don’t know how it makes sense. It probably doesn’t make sense. [Laughs] I think that’s more of an answer. But I’ve definitely gone toward what I feel interested in at any moment, more so than having an idea of what I want to do and taking the steps necessary to get there. I think I get excited by a lot of different realms of creativity, and the first thing that excited me was chainsaw sculpture. When I was 17, I saw a little poster on a tree that said “Chainsaw Sculpture Apprenticeship,” and I didn’t have anything else I wanted to do and I didn’t know what I would study in college if I went, and so I just moved up there and did that for four years.

Two of the characteristics I always think about with your art are beauty and gentleness. I don’t remember what had happened one day, but I texted you, and I was like, “I’m listening to your record because it’s all I can bear.” Something had gone on in the world that was horrible — I don’t remember if it was one of the various shootings … something had happened. Can we talk about the importance of having those things in our lives, beauty and gentleness? Because I think, as I get older, now, and even in the past year or so — I wonder why — those things are really, really important to me. What do they mean to you?

I totally agree with that, that they are important. The first thing I think of, when you say beauty and gentleness, is nature. I think, especially right now, when we’re all on our phones all day or on computers, and everything is so instantaneous, and there’s an aggressiveness to everything, I think it’s more and more important to have that, doing things for the sake of beauty, or having a gentle approach of letting something unfold in a really organic way, rather than saying, “I want to do this, and this is the step to do this.” I think, as the nature of the world right now, and media, and how we get information, and how aggressive that information is, how chosen that information is, filtered to be more dramatic or to affect you in three seconds, rather than a slow unfolding of something, I think it’s more and more important to be [gentle].

And it’s a conscious choice, because I feel like the natural response or reaction to that aggression would be to harden up. So, it feels like a conscious choice to soften. I’ve been experiencing it in a very tangible way over the past few months, of settling into my house and painting things, with paint colors, and bedding, and art. All of those things have become really, really important to me. I find myself being drawn to softer things than I ever have in my life. That’s an interesting observation that perhaps it is in response to this edginess and aggression that’s going on in the world. I just thought I was getting old or something, but I like your explanation better!

I think you’re right, though, that the natural response, as things are getting harder and harder, is to toughen up, but again, with nature, you see that there’s a natural balance that’s created. At a certain point, you can’t toughen up without vanishing.

There’s creating beauty, intentionally surrounding yourself, but the other part of it is finding the beauty in things that others might dismiss, whether it’s a conversation or a dream or a piece of wood, a graveyard — because your record is called Wildflowers in the Graveyard. Is that something you’re constantly on that frequency of seeking out the beauty in places where it might not otherwise be found?

I don’t know, consciously, if I’m trying to find those things, but I’m definitely drawn to them. It’s easy to get really wrapped up, and I definitely get wrapped up in the business of things, the loudness of things. For me, going into nature or sitting quietly or playing piano for a couple hours and losing myself in it, little things like that, are what keep me attuned to that frequency.

One of my friends is a tracker in South Africa and he always talks about this with tracking. Everything is speaking to you. He talks about trackers, how you go down a path and, if you’re not used to tracking, you’ll be like, “Oh, there’s a clearing over here and there are some footprints.” But as you get more and more attuned to what tracking is, you’ll say, “Oh, there’s a little bit of mud on this branch that an animal has come by in the last few hours. Or there’s a bird call that happens when the monkeys are out” or whatever. But it’s finer and finer tunings. I guess the quieter you can find [yourself] in life, the more you start seeing these beautiful things that are always there.