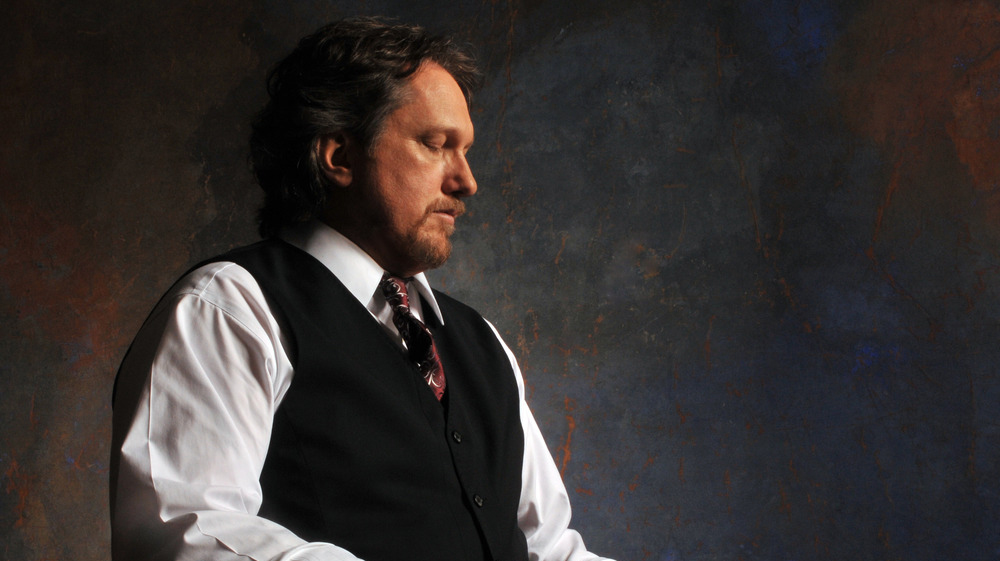 With me today in the Writers’ Rooms at the Hutton … Jerry Douglas. Welcome!

Hello. How are you?

Okay. Let’s talk about this dobro thing that you’ve got going on.

As you should be. [Laughs] What was it about the dobro that first lured you in, so many moons ago?

I don’t know if it was the dobro by itself or the guy who was playing it. Josh Graves played the dobro with Flatt & Scruggs, and he was the one that made me want to become a musician. It wasn’t just the way he played it, because I was hearing Bashful Brother Oswald, at the same time, playing with Roy Acuff and that was good, but Josh Graves stepped up to the microphone and he blew the doors off the place! He could keep up with Earl Scruggs, and he played bluesy, too. He played the blues. I think that was the difference for me, because I was growing up close to Cleveland, Ohio, so I was hearing a lot of rock ‘n’ roll at the same time, and it all worked for me — made the instrument work for me.

My dad had a bluegrass band, but there wasn’t a dobro player within a million miles of me. [Laughs] I told somebody the other day that I stood a better chance of getting hit by a car than to find a dobro. It was not something you saw and they didn’t know what it was. You’d go to a music store and say, “Do you have any dobros?” and they’d look at you like …

But you found each other.

You’re like Béla Fleck with the banjo, to me. Musically, you guys both do things with these instruments that isn’t normally expected. Who’s leading that exploration — is it you or the instrument? Are you following where it’s taking you?

I’m trying to take the instrument to new places. It’s a great bluegrass vehicle, which has been proven over and over again, with Josh Graves and Mike Auldridge and Rob Ickes. There are several people who really can play one of these things. But I keep exploring and trying to find other ways to use it — in classical music, jazz, rock ‘n’ roll. I created a pickup that works with it that keeps it sounding like a dobro, but you can play to a 24,000-seat place without feeding back. You can compete with a telecaster.

Nice. Do you ever get tired of it and think, “I’m gonna switch to the French horn” or something? Does the mastery ever stop? Is it every complete? Or is there always something new to learn and explore?

There’s always something new. I keep my ears open, and I sort of adapt other things to the guitar. The guitar’s a conduit of whatever’s in [my head], what’s rolling around in there all by itself. It’s a cobwebby place. [Laughs] But I think that I’m kind of trying to lead it from one place to another, but I do get tired of hearing it. I got so tired of it that I started carrying around refrigerator-sized racks of things to make it sound not like a dobro. And then I got tired of that, and I just wanted to hear a dobro again! So it’s a necessary evil.

But I love the sound of the guitar. These newer guitars don’t sound like the dobros did that were on the records that I learned to play from. So I keep a lot of those old guitars around, too. The guy that builds my guitars has actually just come out with a line of guitars that sound like the old guitars. Because, when I play with the Earls of Leicester, I play only old guitars, but he’s got this new guitar I played on the new record with the Earls and no one noticed.

Better construction, yeah. The older dobros, the Dopyera brothers got really lucky. [Laughs] The cone, a lot of things about the guitar haven’t changed since 1927. But the construction has, and how they’re big, beefy, low-ended things that have all these voices that the old dobros didn’t have. But the haunting element, for me, that drew me in in the first place, that’s missing from the big, beefy, hybrid guitars.

You mentioned the Earls of Leicester. I mentioned the Transatlantic Sessions and other collaborations, but your latest record is a Jerry Douglas Band joint called What If. Where do you see that album fitting into the wider landscape of your work?

That was really pushing my audience, I think. I quit a long time ago trying to make records for my audience.

I would think you would’ve had to.

I make them for me. I figure, if they really like me, they’ll go wherever I go.

Or wait until the next thing comes.

Or just wait until it comes back around to what you like! [Laughs] I love that record because it’s so big and full. It’s the full band effort with two horns and electric guitar, and everything is on this record. Except keyboards. But John Medeski is gonna play with me at MerleFest! So who knows where we go from there. But I just like the full sound and being able to, more or less, play the band, at this point. It’s dobro driven, and I write everything on the dobro, but everybody gets a little piece of the action.

[Tell me a memory of or something you gleaned from] Earl Scruggs.

Earl Scruggs was probably the first thing I remember hearing — ever. Then, when I got old enough, even at five years old, I knew that was good. I knew that was a good sound. It was obvious, just the way my dad would react to it and everybody, before I ever saw him. And then, when I saw him, he was on a pedestal to me, as was Josh Graves and the whole band. That was like seeing the Beatles for me, at six or seven years old, to see Flatt & Scruggs live in Youngstown, Ohio, at Stambaugh Auditorium. I even know what date it was and everything. It was like seeing the Beatles.

And then, I grow up and I move to Nashville and Earl Scruggs becomes my friend. That’s just nuts. But then, to get on the bus with him and be playing in his band, just to wind him up and let him start telling stories … because he was a very quiet man, a very quiet, reserved man. But when he got started telling stories, he couldn’t stop. It was so good! Everything was so good. Every minute, every second that I spent with him, I cherished. I’m blessed to have hung out with and been in the presence of some of these people. And Earl Scruggs is way up there on the top of the heap. There are not many people you can look at and say, “That guy is definitely a legend.” He’s like a George Washington, Abraham Lincoln kind of guy. [Laughs] I haven’t met many of those, a couple others maybe, but he was the first one — the first sound I ever heard and what influenced me in the journey that I’ve had, and what made me take the path that I took.