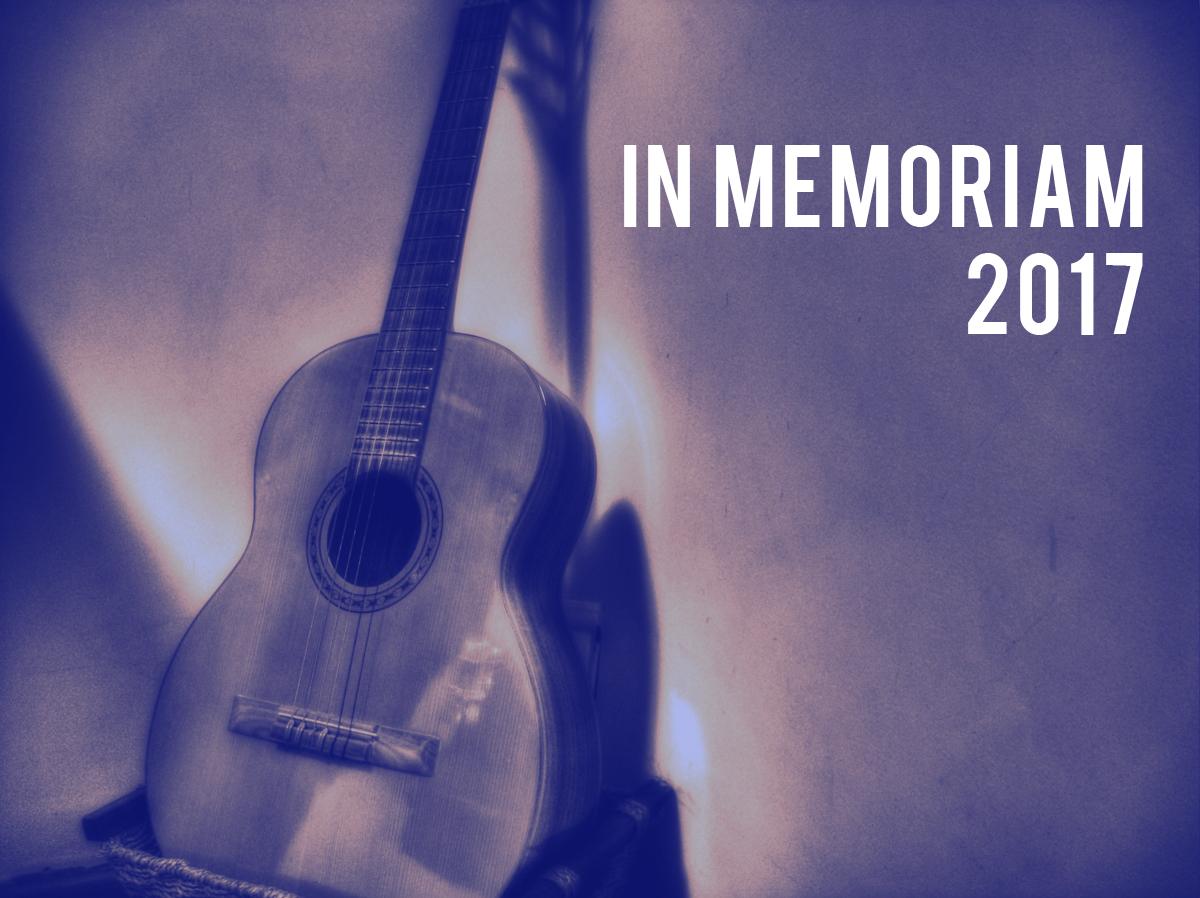 The year end is a time for round-ups — reflections on the cultural, social, and political landmarks of the past 365 days. But the tragedies brought on by ideological conflict, mass violence, and natural disasters in 2017 are particularly hard to sum up in a few simple phrases or talking points. That’s where music comes in, lending form to feelings and ideas that we may otherwise struggle to put into words. Luckily, there were plenty of releases that did just that throughout the course of the year (and we’ve highlighted our favorites on our BGS Class of 2017 lists).

However, this function of songwriting is far from new. Music has provided respite or thrown down the gauntlet since its inception, and 2017 saw the passing of artists across all genres who have channeled this power brilliantly for years. We lost Sharon Jones, Curly Seckler, Butch Trucks of the Allman Brothers Band, Chris Cornell of Soundgarden and Audioslave, Hüsker Dü’s Grant Hart, AC/DC’s Malcolm Young, Steely Dan’s Walter Becker, Sister Sledge’s Joni Sledge, Montgomery Gentry’s Troy Gentry, Jimmy LaFave, Linkin Park’s Chester Bennington, Kevin Garcia of Grandaddy, and Pat DiNizio of the Smithereens, among others.

Here, we pay tribute to and honor the legacies of musicians who have bolstered communities, broadened the scope or forged new paths across this broad spectrum that we call Americana.

Chuck Berry is heralded as one of the preeminent fathers of rock ’n’ roll. His influence is so profound that John Lennon once famously remarked, “If you tried to give rock ‘n’ roll another name, you might call it ‘Chuck Berry.’” Born in St. Louis, Berry signed to Chicago’s Chess Records in 1955 and produced some of the biggest staples in American music like “Roll Over Beethoven,” “Sweet Little Sixteen,” “Rock and Roll Music,” and “Johnny B. Goode.” Berry contributed just as much to the landscape of country as he did to pop and R&B, and his songs became hits for heavyweights like Waylon Jennings, Emmylou Harris, and Buck Owens. His impact on the genre was recognized in 1982, when he was inducted into the Nashville Songwriters Hall of Fame. In 1984, he received the Grammy Lifetime Achievement Award and was inducted into the Rock and Roll Hall of Fame in 1986 as part of the inaugural class. Released in June, Berry’s posthumous record, CHUCK, became his first studio release since 1979. Tinged with playful nods to the past, it’s a fitting farewell from the architect of rock ’n’ roll.

As co-founder of the Allman Brothers Band, Gregg Allman was one of the most enduring figures in music. Allman and co. rose to fame as sonic trailblazers with their amalgamation of soul, gospel, R&B, country, and jazz. Allman was a strong proponent of the blues, and while he is often hailed as the king of Southern rock, it’s a moniker that he didn’t fully embrace. As Gregg Allman Band guitarist and music director Scott Sharrard told us in an interview earlier this year, “[Gregg] used to say to me all the time, ‘Nothing matters but the blues. You can go in all kinds of directions with music, but if you don’t have blues, you don’t have shit.’… And he also used to say something to me, which I thought was a really, really deep and important historical and contextual understanding of musicology in America, that there’s no such thing as Southern rock. All rock is Southern. It’s all from the South. All of it.” During Allman’s quest to preserve and build upon the blues tradition, he penned notable tracks like “Midnight Rider,” “Melissa,” and “Whipping Post.” He passed away in May due to a reoccurrence of liver cancer, leaving behind his posthumous release, Southern Blood, and a legacy of down-home soul that cuts right to the heart.

Selling 50 million records over six decades, the Rhinestone Cowboy reigned as country royalty, but is just as deserving of the title “Crossover King.” In the ‘60s, his guitar chops earned him a spot in the Wrecking Crew, a cast of sought-after session musicians in Los Angeles. As part of the Crew, Campbell played on infamous recordings like Frank Sinatra’s Strangers in the Night, the Beach Boys’ Pet Sounds, and Elvis Presley’s Viva Las Vegas. Toeing the line between pop and country, Campbell became a solo star in his own right, with a perfect croon that was unmatched. He was inducted into the Country Music Hall of Fame in 2005 and awarded with the Grammy Lifetime Achievement Award in 2012. In 2011, Campbell announced that he was diagnosed with Alzheimer’s and embarked on a Goodbye Tour, which was captured and subsequently released as a documentary film. He lived to see the June release of his final album, Adiós, which he recorded with the help of his longtime friend and banjo player, Carl Jackson. A pop star and a country legend, Campbell will forever be remembered as the down-to-earth farm boy from Arkansas who never lost sight of his roots.

The Gentle Giant got his start in the mid-60s, forming the Pozo-Seco Singers with Susan Taylor and Lofton Cline in his home state of Texas. After the trio went their separate ways, Williams moved to Nashville in the ‘70s and launched a prolific solo career that kept him on the top of the charts for decades. From 1974 to 1991 and over more than 40 albums and 50 singles, he never charted below number 22. Williams’ straightforward tunes and smooth vocal provided the framework for some of modern country’s biggest names, and his contributions were honored during his induction into the Country Music Hall of Fame in 2010.

The word to describe Jessi Zazu is fearless. The Nashville-based singer/songwriter co-founded the band Those Darlins as a teenager alongside fellow musicians she met at the Southern Girls Rock Camp. Born out of an affinity for the Carter Family, Those Darlins sonically ran the gamut from rockabilly to growling punk and back again. On stage and off, Zazu was the epitome of grace and grit. An artist through and through, she was a staple in the Nashville scene who was just as prolific in the world of visual art as she was in songwriting. Those Darlins planned to go their separate ways, performing their final shows in March 2016 just weeks before Zazu was diagnosed with an aggressive form of cervical cancer. She publicly shared her diagnosis with a video last December in which she shaved her head and wore a t-shirt bearing the phrase “Ain’t Afraid” — a Those Darlins song written years prior. Zazu was a fighter and a creator until the very end; she continued coaching young women at the Girls Rock camp, recording solo music, and hosting art exhibitions. In her short 28 years, Zazu exuded a strength, determination, and passion that will serve as an example for young women for years to come.

James Brown’s frenetic set at the Apollo Theater on October 24, 1962 was given an official release the following year. One of the most acclaimed live albums of all time, its magnetism impacted generations of music fans, including a young Charles Bradley, who was in attendance at the show. In the years that followed, Bradley worked a series of odd jobs — from a cook to a James Brown impersonator — all while keeping his aspirations of a singing career in focus. Bradley’s big break finally came in the form of Gabriel Roth, who co-founded Daptone Records. Roth introduced Bradley to producer Tom Brenneck, and the result was Bradley’s debut album, No Time for Dreaming, released in 2011 when Bradley was 62 years old. Over the course of six years and two more albums, Bradley delivered captivating, worldly soul ballads that garnered him his own nickname — the Screaming Eagle of Soul.

Tom Petty is a national treasure. Songs like “Mary Jane’s Last Dance,” “I Won’t Back Down,” “American Girl,” and “Free Fallin’” are so ingrained in the American fabric that it’s hard to imagine a time when you could turn on the radio and not hear Petty on the dial. After a chance encounter with Elvis Presley, Petty became interested in music, later dropping out of high school to join the band Mudcrutch. After its dissolution, he formed Tom Petty and the Heartbreakers — the platform which would solidify his status as a rock icon. He recorded two albums as part of the supergroup the Traveling Wilburys, which also included Bob Dylan, George Harrison, Jeff Lynne, and Roy Orbison, and was inducted into the Rock and Roll Hall of Fame in 2001. Petty and the Heartbreakers had just wrapped a 40th anniversary tour when he suffered a heart attack. Petty’s death came as a gut-wrenching shock, just a day after the mass shooting at the Route 91 Harvest Festival in Las Vegas that killed 58 people. But we can all find solace in Petty’s legacy, which is palpable. No doubt his contributions will continue to serve as mainstays in music for years to come.

Fats Domino ushered in the early wave of rock ‘n’ roll, topping the charts in the ‘50s and ‘60s with “Blueberry Hill,” “Walking to New Orleans,” and “Blue Monday,” among others. His adept piano playing and hearty stage presence was infectious, and he was eclipsed on the charts only by Elvis Presley, coming in a close second. His New Orleans rhythm and blues captivated a wider audience and popular music was all the better for it. Rock ’n’ roll heavy hitters like John Lennon and Led Zeppelin later covered his work, and his accomplishments were recognized in 1986 when he became part of the first class of inductees into the Rock and Roll Hall of Fame. Fats’ brand of boogie woogie injected new life into pop, and his reverberations can still be felt today.