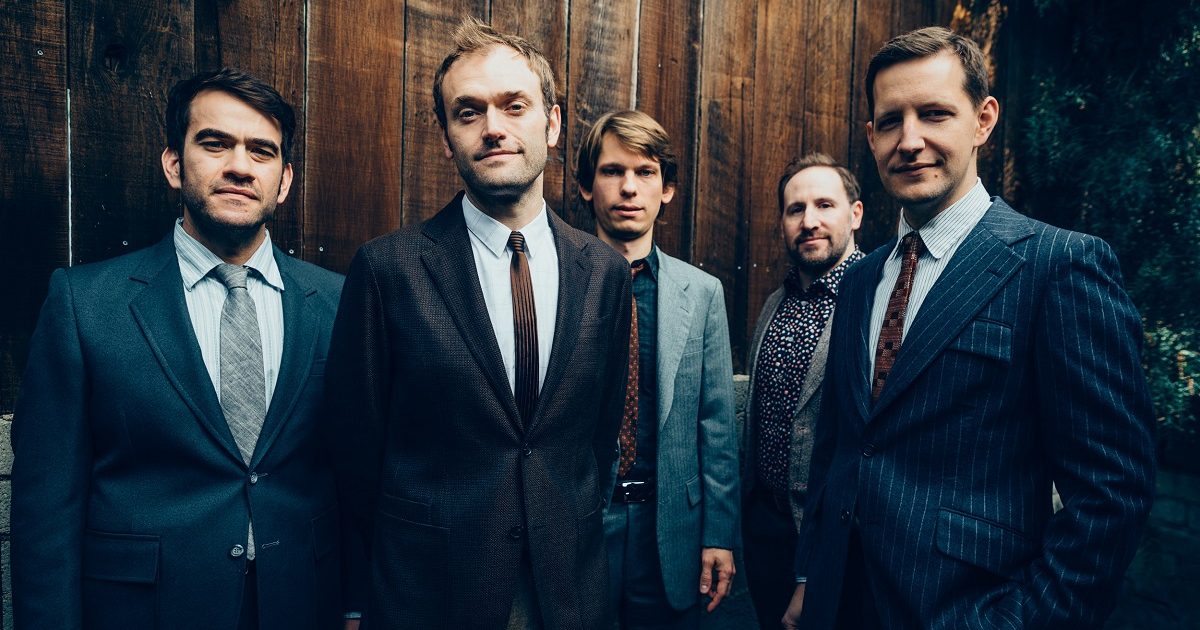 It was banjo player Noam Pikelny who heard first. On December 26, 2020, he messaged his Punch Brothers bandmate Chris Eldridge to tell him the news that Tony Rice, their bluegrass hero and Eldridge’s guitar mentor, had died on Christmas Day. “It just didn’t seem like it could be real,” says Eldridge. “It was a complete shock.”

The band felt more than just sadness at the legend’s passing; there was regret, too. Eldridge had thought about calling Rice to tell him what they had been working on — a reimagining of his landmark album, Church Street Blues — but had resisted the urge. “I thought, you know what, it’ll be cooler if I can just give him the music. ‘Hey, we made a thing for you…!’” The moment had never come. It was a heartbreaker.

Hell on Church Street, Punch Brothers’ sixth full album, was recorded in Nashville the month before Rice died. The 1983 solo record that inspired it is high canon among bluegrass lovers with its wistful songs and fiddle tunes repurposed as dazzling guitar solos, laid down in the period when Rice was opening up bluegrass music in multiple directions at once. Punch Brothers have remained faithful to the original tracklist, but equally to Rice’s boundary-pushing creativity.

What emerges is a kaleidoscopic mise en abyme — their versions of Rice’s versions of songs by Bob Dylan, Tom Paxton, Gordon Lightfoot, et al. — both reflecting bluegrass’s rich progressive history and refracting through their own endlessly inventive perspective. Those hoping for Chris Thile to indulge in some light Gordon Lightfoot karaoke, in other words, will be disappointed. A few have already cried sacrilege. Witness the internet backlash that accompanied the band’s release of the title track, which resets Norman Blake’s famous lyrics to an urgent 5/4 meter.

“You never want to admit you look at internet comments but some people were pissed,” says Eldridge. “I thought, oh boy, wait til these people hear ‘Gold Rush!’”

Even Pikelny admits he had a few early qualms about the technical ambition of that initial recording. “It took us a day and a half [in the studio] to play it with the effortlessness and ease it needed. But I’m glad we stuck with it, because if we were just going to play it like it’s already been played then really what’s the point? It becomes like a Civil War re-enactment.”

“And it’s just not true to the spirit of what Tony himself exemplified his entire career,” adds Eldridge. “This record was never a memorial — it was a living tribute created in the spirit of some of the deep lessons we learned from Tony: you have to be yourself. If you’re going to make music, play it the way only you can play it.”

Certainly only Punch Brothers would take bluegrass standard ‘Gold Rush’ and turn it into a piece of esoteric free-time improv, ethereally led by Gabe Witcher on fiddle. “For the record we all love that Bill Monroe tune,” says Eldridge, with a wry smile. “But I don’t even think I’ve played a fiddle tune that’s been that deconstructed and stripped of basic elements like pulse and beat before.” It is, laughs Pikelny, certainly not a version likely to be heard at a contest any time soon: “Contestant 11, you’ve been disqualified!”

Hell on Church Street is a record that might never have been made but for the pandemic. The band’s need to quarantine before they could assemble in the studio had restricted their time together and they were looking for a project that would satisfy them musically without turning their precious time in each other’s company into a songwriting bootcamp. “When we’re on the road together it’s camaraderie, it’s therapy,” says Pikelny. “We said, ‘What can we do that we can still enjoy being with each other?’”

Their minds turned back to a similar conversation they had had in Japan two and a half years previously. During their residency at the Blue Note in Tokyo, the band were asked to prepare a set of bluegrass standards for the 2019 Rockygrass festival (or, as Pikelny puts it: “Don’t bring all your original shit!”). With limited time to rehearse — or perhaps, given the allure of the Japanese capital, not a great deal of inclination — someone had suggested paying tribute to an artist or record they loved. The response was unanimous, almost instantaneous. It had to be Church Street Blues. “That record was so sacred to all of us,” says Eldridge.

The live set that followed at Rockygrass became one of the great wish-you-were-there experiences: a performance fizzing with spontaneity, in an atmosphere crackling with passion. It had been a busy festival for all of them — bassist Paul Kowert playing a set with Hawktail, Pikelny performing with Stuart Duncan — and when they took to the stage, they had been working on the material for just four hours. But the coupling of their collective virtuosity with one of bluegrass’s most beloved of song collections created instant electricity.

In Nashville last November they saw the chance to reignite that experience. “It’s not something we get to do much these days,” says Eldridge, “make music by the seat of our pants. And it’s one of the things that initially brought us together, all the way back the first time the five of us got in a room together. It’s something very special to us, and with this project we got to tap into that side of the band that tends to lie dormant for long stretches — to enjoy what it’s like when we don’t have super tight arrangements, when we just have to listen and be very reactive.”

It also allowed them to delve far more deeply into the songs on Church Street Blues than they ever have had before. “You get closer to the material when there’s a responsibility to make it your own,” says Pikelny. His own parents had loved Tom Paxton, for instance: Pikelny had been familiar with “Last Thing On My Mind” since he was a kid. “It had always seemed like just another heartbreak song — it was only when we started working on it I realised how profoundly sad it is.” At the start of their arrangement, Thile’s voice yearns out over the lone plucked notes of the fiddle, a sound like the ebbing of lost time.

But it’s “Streets of London” where Punch Brothers’ ability to mine the meaning of a song and transform it into sonic expression is most evident. Where Rice rendered the melancholy of Ralph McTell’s lyrics through his bell-like baritone, here the stories of abandoned, lonely lives are tossed about in broken melody and dismembered harmony. This is a sad song that’s been restrung with anxiety and tautened with menace, in a manner that detaches it from some nostalgic past and confronts you with the shamefulness of our world’s ongoing poverty and isolation.

What the band wishes, above all, is for the album to honour Rice’s own experimental and fearless musicianship. To most, the man himself had remained an enigma, withdrawn from the bluegrass world and even his peers to the end of his life, ever since the loss of his voice had stopped him performing. “He seemed like a king off in a castle,” says Pikelny. “I wish I’d once got to hear what Tony Rice’s guitar sounded like in a room, but he wasn’t accessible in the way of so many bluegrass heroes.”

But to Eldridge he had been more — a family friend and musical mentor, the man who used to crash on his parents’ sofa when his touring schedule brought him through DC. Eldridge can still recall the moment, aged 12, when Rice effectively changed the course of his own life forever. They were at the Graves Mountain bluegrass festival in Virginia, “and all of a sudden I was like, that’s a Zeus on stage and he’s throwing thunderbolts,” he remembers. “It wasn’t so much that his playing was so great, it was obviously really great that goes without saying, but the impression on me was that every note he’s playing is meaningful and is very direct. It was like they transcended being musical notes and took over your whole being.”

“Isn’t it true that the reason your nickname Critter got reinstated was due to Tony?” interjects Pikelny.

“It was entirely due to Tony! When I was in utero my parents referred to me as the critter, people called me it as a little boy but eventually they stopped and everyone called me Chris. Then when I went down to Merlefest with some of my college friends in 2001, we were hanging out with Tony, and the name came back with a vengeance! And here we are today…”

It’s a touching thought: that Rice’s legacy should have made so personal and lasting a mark on Eldridge, even as it continues to influence the musical world that he and Punch Brothers inhabit. “I would argue that he more than anybody ushered bluegrass into its modern form, in terms of the new standards of musicianship and song selection. He was probably more responsible for that than anybody.” Pikelny nods his head: “The way the music has expanded in all these different directions, Tony was involved in every single one of them, whether it was J.D. Crowe & the New South or David Grisman. It was like a superpower. He was such a team player, there was something about the way he played when he was around he just elevated everybody.”

They’ll never know exactly what their hero would have made of Hell on Church Street. Pikelny suspects there would be bits of it he may have even hated. But they hope that he would have recognised it as, above all, a love letter. “I hope he’d be proud,” says Eldridge. “Of what he encouraged us — and everybody else — to do.”