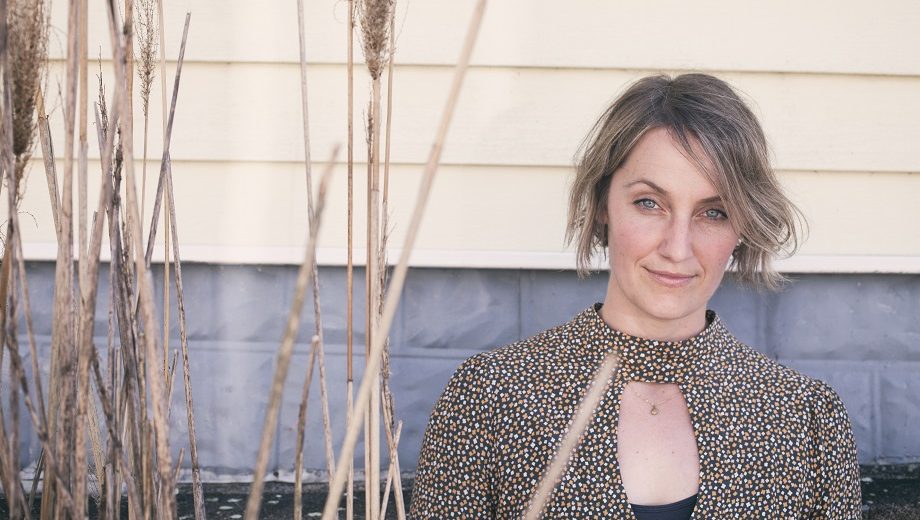 Singer/songwriter Joan Shelley’s voice has a warmth and purity that can still the choppiest minds. Her fifth album, Like the River Loves the Sea, is a calm offering in noisy times. She says she didn’t set out to make an album with any kind of theme or message, but she found herself writing songs that often reflected her love of her native Kentucky.

For many years, Shelley chased the idea of leaving Kentucky, maybe relocating to someplace in Europe or a big city on one of the coasts. She grew up on a small farm outside of Louisville, a swarm of animals, siblings, and step-siblings to play with, a creek and woods to play in.

On her song, “The Fading,” Shelley borrows a phrase often attributed to Mark Twain about Kentucky’s sluggish pace of life: “And, oh, Kentucky stays on my mind/ It’s sweet to be five years behind/ That’s where I’ll be when the seas rise/ Holding my dear friends and drinking wine.” And yet when the time came to record this album, Shelley travelled far from Kentucky to Iceland, with frequent collaborators, guitarist, Nathan Salsburg, and producer and guitarist, Jim Elkington.

BGS: How did you end up in Iceland?

Shelley: I have a friend who’s a complete fan of Iceland. It just started to simmer in my imagination. This could be poetically in between Europe and the U.S., this ancient musical tie on the newest earth that’s in the ocean. I was, like, I want to go essentially to a different planet and make a record and see how that air feels and how that environment works.

When you go someplace like that to record, are you bringing all your instruments with you? Or are you letting the place influence the music?

We each brought a guitar. I was like: I’ll use their banjo; I’ll use their drums; we’ll use their tambourines, everything. In Iceland, there was no banjo. We couldn’t find a banjo. So someone had a resonator guitar and I had to retune that to a banjo tuning that I was using for the song, “Coming Down for You.” You know, funny limits that you encounter like that, even though it’s frustrating at the time and you’re kind of panicked, then you feel for the next step. I love that.

So were you running around Iceland looking for a banjo?

We asked musicians who had been there and musicians know musicians. It’s a pretty creative community. There are a lot of artists and songwriters. And a lot of synthesizers and not a lot of banjos. When you talk about a Kentucky-to-Iceland record, like, you’re in this black hole where you cannot find a banjo.

You became interested in music later in your childhood, but you’ve always had a strong connection to the outdoors that’s apparent in a lot of your songs.

Music came later but when I think about my time in nature as a kid, I would always wander off on my own. I remember distinctly sitting under trees and singing to the day, kind of being a little kid and making up melodies.

Were you singing with an instrument?

No, just singing. Like, bird education. Melodies only. No one had instruments. My mom used to and that’s how I found the guitar. It was in the attic.

Tell me about that.

I was a freshman in high school and I wandered up to the attic which had all the good stuff in it and I kind of dusted off my mom’s guitar that she had up there. And there was a chord chart up on the wall too. She was one of those people who would say, “I just want to get better at this someday.” But it was always someday. So I taught myself from the chord chart on the wall.

Do you have a certain go-to guitar when you’re in the process of writing songs?

I have a Collings guitar which is a pretty fancy bluegrass guitar. It’s good for fingerpicking. I got it from my cousin who passed away. She died really young of cancer. At first I wasn’t taking it anywhere because I didn’t want it to break but then it hit me — no, she’d want to go everywhere! It’s good to be reminded of how lucky I am to have gotten this far and seen what I’ve seen. It’s amazing.

I would say the first song that ripped my stomach out and onto the ground below me was a Dillard Chandler song, a ballad. All his unaccompanied ballads on that Dark Holler record are just gorgeous.

Nathan Salsburg, your collaborator, is also curator of the Alan Lomax archives. Did he help lead you down that well of old-time music?

He exposed me to Dillard Chandler. I wanted to hear the female singers. I was hungry because I know they just don’t get represented in the recordings of the great musicians. When you look at old-time music, and bluegrass too, it’s male-dominated. So I was like, give me everything you got. And he collected some for me to listen to, like Aunt Molly Jackson, Little Jean Ritchie.

What do you hope people take away from this record?

Once I was done editing the songs that would go on the record, I almost called it Haven, because it’s the first song on the record. We need that calm, that haven, whether it’s in terms of relationships or the environment or political noise. I have to remember how to be quiet and lead my thoughts back to being quiet.