Josh Ritter: Smiling Across a Microphone (Part 1 of 2) 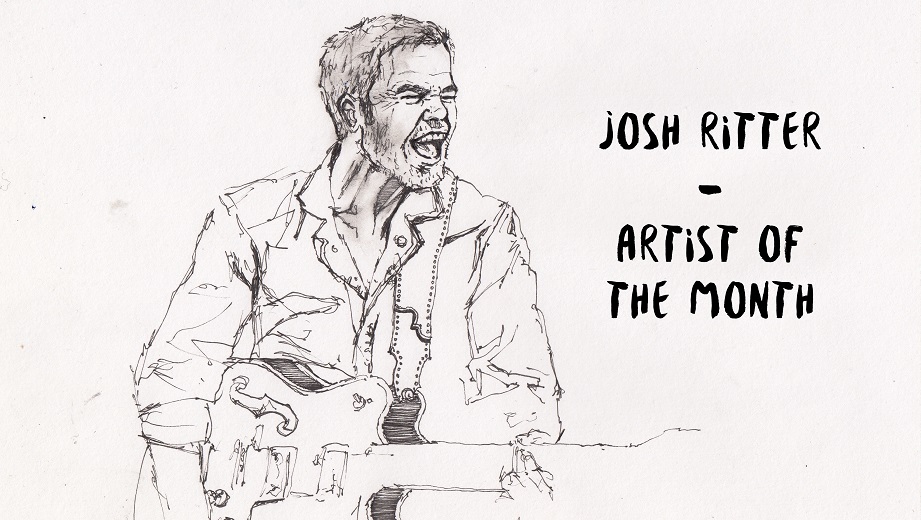 Josh Ritter is the kind of guy who will give you a hug even when you’ve never met him. It’s that warmth and sincerity that has allowed him to build a significant fan base across the US and abroad, not to mention his undeniable enthusiasm for performance. He’s currently on tour with a new album, Fever Breaks, which he recorded in Nashville with Jason Isbell in the producer’s role – along with fiddler-vocalist Amanda Shires and Isbell’s band, The 400 Unit, in the studio.

During a spring tour stop at a cave in Tennessee, Ritter chatted with the Bluegrass Situation about playing these songs for the first time, taking chances, and getting Josh Ritter-y with it. (Read part two of our interview.)

BGS: This album starts with “The Ground Don’t Want Me” and that character’s a bad dude. What led you to kick off the album with that song?

Ritter: For some reason, a lot of this record was totally guided by instinct. Some of those artistic choices felt like there was sort of a still small voice that told me that was the way to start. In fact, “Ground Don’t Want Me” was the first song that we recorded, and the first song that I played for Jason and Amanda when I went down to visit them and was playing through the stuff. So it was kind of the song that was on the tip of my tongue.

When you were playing those songs for Jason and Amanda, were you playing a demo? Or were you saying, ‘Here’s a song I wrote….’ and then sang it?

That’s how I did it, yeah. With my last couple records, I really went in deep with the demos and fleshed them out more on my own. With this one, it felt like the songs were a little more spry and just they needed to be strummed through.

So, they were probably your first audience on some of these songs.

Was that intimidating for you?

No, because that’s one of the moments that I live for. I love the moment when somebody plays a new song for the first time. I think it’s an amazing moment that you can’t ever return to. You can only recreate it. It’s like that moment of ripping a sheet off a statue. That’s how I always think of it — that moment where you can show what you’ve been doing. Playing for them, I was hoping that there would be something in there that they would gravitate towards.

“I Still Love You Now and Then” is a beautiful song and it’s bittersweet, too. What do you hope people will hear in that song?

It’s a song that’s written from a different point of view, in terms of age, you know? I think there’s a time to sing about first love and there’s a time to sing about enduring love. And enduring love can be enduring for all kinds of things! [Laughs] By the time you’re 42, you realize the sort of loves that endure and “I Still Love You Now and Then” is exploring a character who has those kinds of feelings.

I related to it because somebody told me once that there are people in your life that you can never get past. Do you find that experience true for you, too?

Yeah, I find that experience true in so many things. Whether it’s the first book that you read that you really loved and that brought you home, or the first beer you ever had. Those first moments, those are great, and I think one of the reasons that playing music is so fun is that you can be part of that experience. It’s a moment in time that you can’t exchange for anything else.

“On the Water” captures that feeling when you are in love, and when things are going right, and someone loves you back. What was on your mind when you wrote that?

That was a song that I really worked a long time crafting. I started off with an idea in my head and I wanted a new way to say “a leap of faith,” and even a short walk on the water is pretty far. I wanted the song to be about hoping somebody makes a choice, and I worked on it and worked on it… There were a bunch of lines in there that I really loved and I brought it down to play for Jason and Amanda, and they said, ‘This is great, you can go farther here.”

I was like, “OK… I don’t know if this song is anything.” They said, “No, go here in this middle section and get way more Josh Ritter-y with it.” [Laughs] I said, “OK, I can do that!” They forced me to work harder on the song, and that was one of those songs that developed out of constant playing and knowing there was something in there. Once we got into the studio it was clear that it fit the rest of the record.

You must have a pretty good friendship with them, for them to give you such candid feedback and say, “It’s not ready yet.”

It’s what I wanted, you know? It’s what I really craved, and what I hoped for in this situation is that I wanted to make a record in a different situation, with a different lineup of people than I’ve ever worked with. I just really needed that, but working with them was great because I got a chance to work with people who were behind the same microphone, you know? Lyrically they really pushed me to push the songs farther. I took them to different spots than I would have.

Can you tell me more about that need to work that way?

Well, the need is what you really grasp hold of as time goes by. Because you want to stay hungry and you want to be hungry all the time. And you have to take chances, you have to pin what you do to things that might fail. You know what I mean? So, doing that stuff is important because all the nerves — all those fluttery nerves and that weird instinct – was really kicked in to high alert. I really think it’s important to respond to the nervousness that is proactive, especially with art. In the end, it’s just art. It should be fun and it should be exciting, and if it didn’t work, then you tried something. And in this case I took all that advice from them and really embraced it as part of the process for this record.

I’ve read and listened to a lot of interviews with you, and the word “fun” comes up a lot. It seems pretty central to your artistic vision – to have fun while you’re doing this.

Yeah, I don’t like to get into situations where the art gets wrapped up with being something that’s torturous. I appreciate that as part of the story of making a record — like when I got divorced, I had to make a record about that just because I felt like I had to. And that wasn’t the most fun, you know, but in general, making records is a fun thing. You enjoy it and you get a chance to hang out with your friends and make music and have a celebration for a while. I think that that comes across. You can always hear when somebody is smiling across a microphone.