Judy Collins: Singing Through the Memories 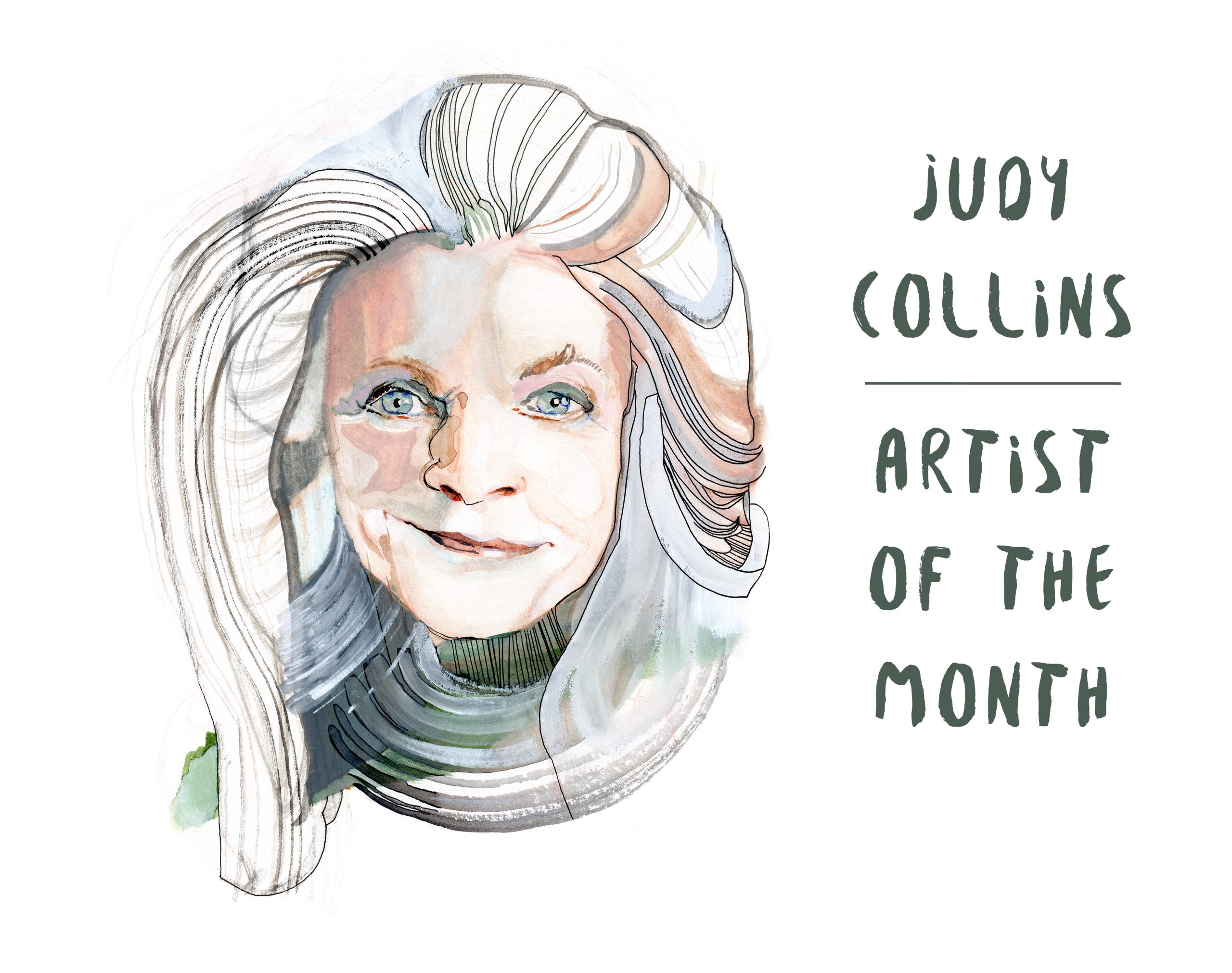 Judy Collins has a gift for determining what songs to record. Call it gut instinct, call it intuition, call it what you will, because she, herself, has difficulty articulating the feeling that strikes when she hears something she simply must sing. “I can’t tell you that because it’s a secret,” she says. “I don’t know the answer myself or I would tell you, but if I love it, I have to sing it. It’s that simple. But it’s really the only answer I know.”

Although recognizing songs she wants to sing might be analogous to a lightning flash, singing them often takes far longer. It isn’t a matter of hearing one and then rushing out to record it within days or even weeks. “Songs will sit around and sort of cook in my mind, or I’ll forget about them — but then I never totally forget about them, if I have some feeling about the fact that I should sing them. They hang around waiting to be paid attention to,” she says. Collins points to one song, in particular, that has haunted her ever since she first heard it many years ago: Gordon Lightfoot’s “The Wreck of the Edmund Fitzgerald.” Even though she very much wants to record it, she hasn’t figured out how. “I’ll do it someday,” she offers. “It’s a magnificent song. It’s a description of a thing that happened that’s awful and probably preventable, but it’s a very dramatic song and very moving. I don’t know: Maybe the motto is ‘Don’t get on ships that have holes on them.’” It’s a line that could apply to more than just boats. Upon hearing this, her mind immediately jumps to relationships. “That’s an interesting word,” she adds. “I didn’t think of relationships in terms of ships. I’ll have to think about that.” And it rings true: Don’t get on board a relationship with holes, whatever you consider “holes” to be in such a scenario.

The now 77-year-old Collins rose to fame on the strength of her voice, which she used to record covers of folk songs, Broadway hits, and more. But she’s no stranger to songwriting and, along with singer/songwriter Ari Hest, has co-written and recorded a new album, Silver Skies Blue. “I’m just crazy about him,” Collins laughs, letting a more playful side of herself emerge. It seems fair to say Hest feels the same. Both appear smitten with each other in the way creative counterparts often exude an excitement and respect for collaborations that grow and stretch and help one become all the better for it. “It’s one of those gifts that comes along and you think, ‘Mmm, this is really wonderful. I wonder where this came from?’” she ponders. The two first partnered when Collins invited him to take part in her 2015 duets album, Strangers Again, by recording his song by the same name. “The process of recording the song was easy, very fluid,” Hest recounts. “I think everything went as well as it could have and the result was that we just really wanted to do more together in the future. It spurred on the idea of writing together, which started only a couple of months later.”

The chemistry they manifested on “Strangers Again” exceeded how their voices paired together — a unique high and low combo that finds its most remarkable element in the way their beautiful timbres counter one another. There also seemed to be a natural and easy collaborative partnership ready for the plucking. The two began meeting in New York to work on what would become Silver Skies Blue. “We’d sit around, have some coffee, talk about our lives, and then have a writing session,” Collins says of their writing time. Hest saw an interesting challenge in their different music sensibilities, since he came from pop and she from folk. That stretched not just the act of their writing together, but writing beyond genres both felt most comfortable in. “For me, the idea of writing songs that were heavily based in verses and more about the story itself … this was a fine concept for me even. We tried to blend the two,” he says.

The result is a 12-track album spanning love songs, meditations on life, and loss, as well as the current state of the world. On “The Weight,” the up-tempo pace creates a foreboding feeling furthered by mournful guitar. “I will soak my soul / Let the river take control, let the river take control / I know it’s not too late / To let go of the weight, to let go of the weight,” Hest and Collins sing together on the chorus, her soprano adding color to his dense alto. That’s the real beauty in the album: The harmonies both singers have discovered in each other’s voices and the way they so agreeably merge into the same song space together. “I’ve sung with a lot of people in the past and, when you sing with somebody who has a similar voice to you, you can almost cancel each other out in a way,” Hest says. “Also, she sounds so angelic, it’s hard not to sound good with her.”

The songs Collins and Hest have written add to the large oeuvre of her work, which largely involves singing words and melodies someone else has penned. Through it all, she’s made each song her own. She says, “I think songs have a very strong life. It has little to do with the writer. The writer writes them and then maybe sings them, maybe not, but then they take on a life of their own and go around and meet other people. They have a whole existence, I think. You hear a song that you like, and you’ve heard 15 people recording it or singing it, then you know it’s always different. It always sounds like the singer who’s singing it. It will stand out in a different way for each performer.” 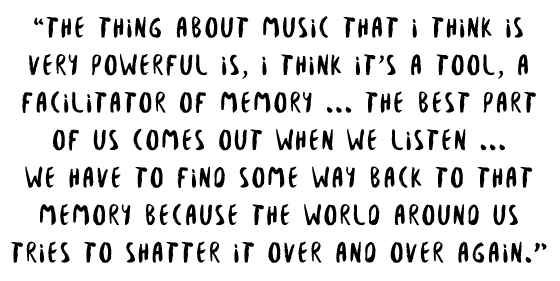 After all, songs for Collins carry an important message from the past that must be shared and shared often. In speaking about songs as memories, she touches upon whales. “I have this friend — he’s a whaling person,” she explains, “He says that the whales are singing for very specific reasons about memory: where to go, what to do, how things are going, if the planet is in good shape or not. They have to remember where they came from and who they were and who they are, and that’s what I think it is about music.” In the way that whales communicate through song, Collins draws a parallel to music’s purpose in the modern world. Of course, there are the less thoughtful hits that provide entertainment, but songs with real meaning — with real messages — resound throughout the ages. “The thing about music that I think is very powerful is, I think it’s a tool, a facilitator of memory,” Collins says. “I think that’s probably what it was supposed to be about always. 'Let’s remember where to go to get that incredibly good bison we shot a few weeks ago, and if we put it into a poem or a song or we draw it on the wall of the cave' … Somehow — but particularly in music — there is a memory that is reignited. The best part of us comes out when we listen and when we perform, as well.” She continues to sing because she wants to participate in the storytelling, in the memory sharing. “I think it’s true that we have to find some way back to that memory because the world around us tries to shatter it over and over again,” she says.

If her age suggests she’s slowing down, Collins doesn’t intend to stop anytime soon. Hest says, “One thing I really envy about Judy is she is constantly looking for new things to do, new kinds of songs to sing, new projects to get involved in. She has the energy of someone who’s younger than me, and it’s really cool to witness it.” She’s already working on a Stephen Sondheim album, something she’s wanted to do for years. Given her love for Broadway music, would she ever follow in Sara Bareilles’ footsteps and write the music for a musical? She pauses. People have asked her to perform in Broadway musicals, a potential strain on her voice given the number of performances required each week. But writing might be another thing. “Maybe there’s something in that idea. Maybe I should try to shape something that would be doable by other people. I will think about it. It’s a good idea,” she says. Whether she does or not, her work ethic promises listeners that she will continue finding songs or creating them in order to share those crucial memories connecting then and now.