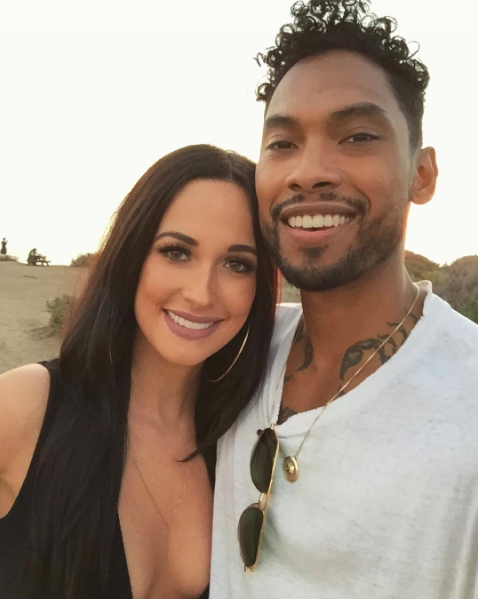 2016 is the Year of the Wave. Towards the beginning of his torrential outpouring of tweets, Kanye West got into a Twitter spat with Wiz Khalifa over, among other things, his choice of Waves as an album title for what eventually became The Life of Pablo (if you care enough about the fight, it's explained in detail here). It was silly and the Internet laughed. Today, though, there's a new wave in town, and it sounds a lot better than Kanye West angrily typing into his phone.

Odd couple Kacey Musgraves and Miguel reimagined the latter's track "waves," off his excellent 2015 album Wildheart, and it's pretty damn fantastic. For the uninitiated, Miguel is an R&B artist frequently cited as this generation's Prince, thanks in equal parts to his stellar falsetto and his seemingly insatiable sexual appetite. The track in question is part of Rogue Waves, a just released 5-song EP that remixes Miguel's original tune via artists like Tame Impala, Travi$ Scott and, most notably, Musgraves.

Most of the remixes sound like facsimiles of the original, but Musgraves' version finds the song slowed down considerably, the funky beat of the original replaced with twangy guitar licks and an interplay between and Musgraves and Miguel that would make Dolly and Porter proud. That slower tempo, combined with the addition of a female voice and the ensuing back-and-forth between the two artists, makes for, somehow, an even sexier song than the original, and an important new entry into the country crossover canon (Case in point: about two minutes in when Musgraves sings “until I hit the peak,” the music drops out, and a guitarist we can assume to be Misa Arriaga comes in with some spaghetti western twang. Damn).

Country is no stranger to crossover. The last few years, especially, have seen a near meteoric rise in the popularity of country that sounds less like itself and more like pop or hip-hop, with artists like Florida Georgia Line and Sam Hunt borrowing from Top 40 radio to six-figure results. In some cases, it works. In others, not so much. "waves" definitely falls into that first category, proving that a little mutual respect between genres can yield surprisingly good crossovers. Now, let's all cross our fingers for a Kacey Musgraves R&B album.