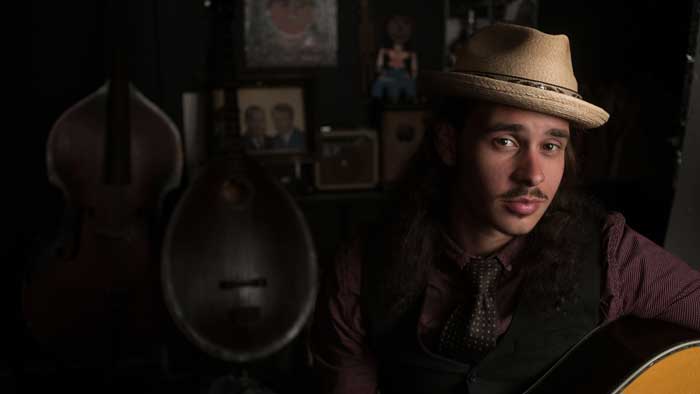 Born and raised in North Carolina, of course John Locklear (AKA Lakota John) could draw from strong regional and cultural influences to create his sound: old-timey, down home, acoustic blues. But his North Carolina roots aren’t his only connection to the Piedmont, and the vast, richly diverse musics that come from his home state. His Lumbee and Lakota lineage most certainly have an equal influence on his picking, his songs, and his style — especially given the huge impact Native and Indigenous Americans had on the creation of American roots music in general. It’s an impact that continues to this day, despite constant erasure and attempts at exclusion.

Ahead of Lakota John’s performance as part of BGS and PineCone’s fourth annual Shout & Shine: A Celebration of Diversity in Bluegrass — at IBMA’s Wide Open Bluegrass festival in Raleigh, North Carolina, on September 27 — we had a chat about why old-time blues isn’t just time capsule music and what folky magic must be in the water in North Carolina.

BGS: So many folks view this style of down home, old-time blues as antiquated music, as “throwback” music. What do you think blues, especially of the kind that you make and play, can bring to this modern era? What value is added to it if we allow it to be in the present?

Lakota John: Awareness of the genre itself and the fact that without roots music, many other types of music wouldn’t exist. Roots music is the foundation of other music and by bringing it into today’s musical conversation, younger generations can embrace its importance as a foundation and use it to innovate and create new styles of music.

What was your own entry point to this style of folky, vernacular music?

I grew up listening to the music of the ’60s and ’70s, because that’s what my parents listened to. Around 10 years old, I became curious about the earlier influences on the artists who produced music in the ’60s and ’70s, which led me back to blues, bluegrass, and roots music. I could see the correlation between the earlier music and later music in so many ways and found it really interesting how the music evolved.

Erasure is so prevalent in American society, many people — including historians, journalists, and ardent fans — don’t realize how fundamental Native and Indigenous influences were (and still are) to American roots music. Who influenced you? Who do you point to, to help reduce and eliminate that erasure?

I feel Jelly Roll Morton, Rev. Gary Davis, and Charley Patton are just a few of my influences who approached music with a percussive and syncopated style which is something Native and Indigenous people have always shared through their music and traditions. With later musicians such as Muddy Waters, Link Wray, The Allman Brothers, Jesse Ed Davis and many more, the basic structure remained but they incorporated an electric sound into the blues along with other styles to create their own unique sound.

Part of that erasure is simply because most colonizers and descendants of colonizers, immigrants, etc. do not realize that Indigenous people are still here. What do you say to folks, even the most well-intentioned and progressive among us, who have this very common blind spot when it comes to Native Americans, Indigenous peoples, and Indigenous rights?

Native peoples walk in two worlds, the traditional and contemporary; we’ve always been here and always will be. We’re more than the stereotyped “Hollywood Indian” and definitely not museum artifacts. Hopefully to clarify this common blind spot I’d say, “I had some difficulty finding my keys and a parking space for my buffalo this morning.”

Shout & Shine returns for its fourth year at the IBMA’s Wide Open Bluegrass Festival at the end of September. What does bluegrass mean to you? What, if any, of its influences have filtered into your music and art?

That’s awesome. I grew up listening to bluegrass music and I definitely incorporate some elements of the bluegrass style into my own music. Bluegrass is an interesting art form and a very important category of roots music.

IBMA being hosted in North Carolina, in Raleigh, for the past number of years seems like a perfect fit. What is it about North Carolina that makes it such a hotbed for roots music? What do you get out of living and performing in this richly musical area?

Man, I really think there’s something in water here. The south has always been a hotbed for roots music, possibly because of the many trials and struggles the south has been through in our country’s history. Because I’m from North Carolina, I’m connected to the community and music that has been an influential piece to what I do. This place is one of the richest musical areas where I have been fortunate enough to have access to artists and mentors who were and continue to be pioneers in the development of roots music in America.