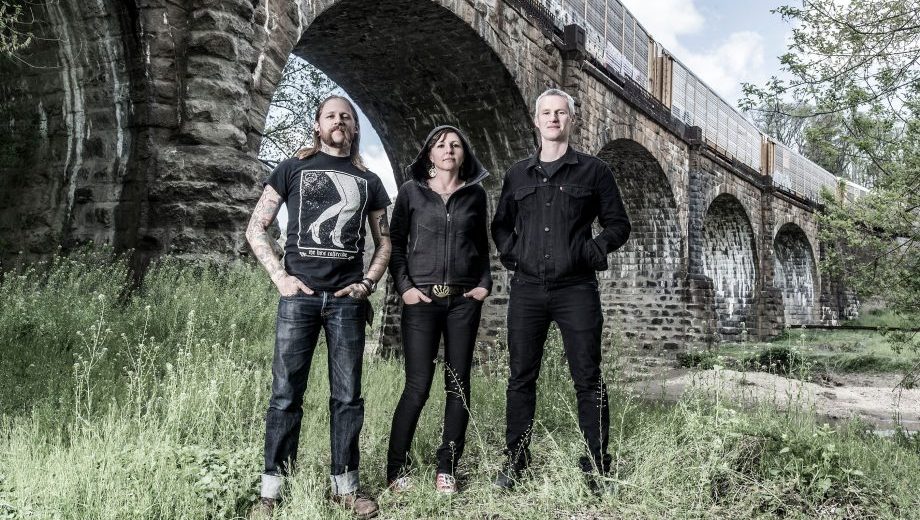 Capturing your band’s live sound in the studio is right up there with writer’s block as one of the most common challenges you can face as an artist—particularly if, like The Devil Makes Three, your live shows are your bread and butter.

The California trio, whose high-energy tours and festival appearances attract a fiercely dedicated fan base, have already released a couple live albums. But as they were writing Chains Are Broken, Pete Bernhard, Lucia Turino and Cooper McBean made a conscious effort to further capture their live instrumentation in the studio by inviting their touring drummer, Stefan Amidon, to record with them.

“We recorded with a [session] drummer who we really liked on our last album, Stranger, and it was just fun,” Bernhard says. “It gave us a lot more, I dunno, freedom I guess. There’s a certain freedom in playing as a string band too, but it was a different kind of freedom. But yeah, we’ve been playing with [Stefan] for years. Sometimes people see us play and they’re really shocked that we have a drummer, but that usually means that they haven’t seen us in like three or four years.” He laughs. “So we wrote a lot of the songs including drums, so when we went into the studio, it seemed like the natural progression to have him play.”

However, that doesn’t mean drums are a permanent addition to the band’s setup.

“I don’t like to predict the future,” he says. “I think that maybe we’ll use him if we think the song is appropriate, and if we write a song that’s just like a guitar and a bass, then we’ll do that. The main thing I like to do is just approach it like there really aren’t any rules, you know? And if the song wants drums and it wants a bass clarinet, then that’s what we’re gonna do. And if it doesn’t want that, if it wants like an electric guitar and standup bass and vocals and nothing else, then that’s what we’ll do.

“We still play without a drummer sometimes, it just really depends on the gig. But for us it was really exciting to do it and just try it because we hadn’t done it before. But yeah, for the next record, maybe we won’t. Maybe we’ll use drums on some songs like we did on Stranger and not on others; maybe we won’t use them at all. I think it really depends on what we’re excited about writing. There are no hard and fast rules.”

That lack of rules when it comes to their recording process led them to venture out to Texas for a new sort of studio experience as well, working on Chains Are Broken at the Sonic Ranch, the largest residential recording studio complex in the world.

“I’d never been to a recording studio like that before,” Bernhard says. “I’d never done like a live-in sort of studio. It was really cool. It was a very strange experience. You live at the studio, and there’s a lot of other people recording there too, so it’s kind of like—I don’t know, I don’t know how to describe it. It’s like band camp or something. Because while we were there, there’s like a jazz artist next door who’s recording, and there’s a rock group, and then there was Tito & Tarantula, which is a little more on the punk side of things, and it was really cool and very, very different. We’re used to sort of going into a city and recording in a studio and kind of spending a lot of time someplace in the middle of everything, and this could not be further away from that.”

He adds, “It was incredibly isolated. It was down by the Mexican border. It was really, really pretty and really quiet and really peaceful, and we just focused on playing every day for a couple of weeks and before we recorded the record, we sort of hung out and played the songs and talked about how we wanted to change them, things we liked, things we didn’t, and it was like we got so much more space and time to work on the record than we ever have before. It was really cool. It’s kind of creepy out there though…It’s the desert, you know? And I think that kind of influenced the sound of the record too. Just sort of the environment is very kind of empty and really pretty but also a little bit lonely.”

You can hear that influence on tracks like “Can’t Stop,” a deceptively upbeat song with dark lyrics that only reveal themselves if you’re listening closely. Bernhard says it’s about the pitfalls of being an artist.

“I think mainly for me it’s just a song about being an artist of any sort—a musician or a visual artist—and what I think is sometimes necessary to be an artist. When I wrote the song I was thinking a lot about how a lot of artists kind of finish their lives in a terrible way, you know?” he says. “Like someone like Hemingway, he was given electroshock therapy and he basically drank himself to death, and somebody like Townes Van Zandt also met with a sad end. I was reading James Baldwin and he was talking about how being an artist is one of those things where instead of you choosing to do it, it’s one of those things where you can’t help doing it. You have to do it. And you don’t have a choice whether you do it or not, and you do whatever’s necessary in order to make that happen.”

He continues, “And sometimes that’s kind of not that great. But people who are artists and feel they have a vision that they want to see happen and that they’re driven to are willing to do that. And I think that was the inspiration for the song, you know, really not being able to stop. You might want to, but you can’t. And I think that’s sort of a part of the life of being an artist or a creative person in any way, and it is kind of dark sometimes. I think it’s a really great thing and it’s a wonderful gift to be given, but at the same time, yeah, it can be kind of a dark thing. And just that feeling of not being completely in control, I think that that’s part of being an artist of any kind. You kind of give yourself over to that, and it takes you wherever it’s gonna take you, and sometimes where it takes you isn’t that great, but that’s part of the ride.” 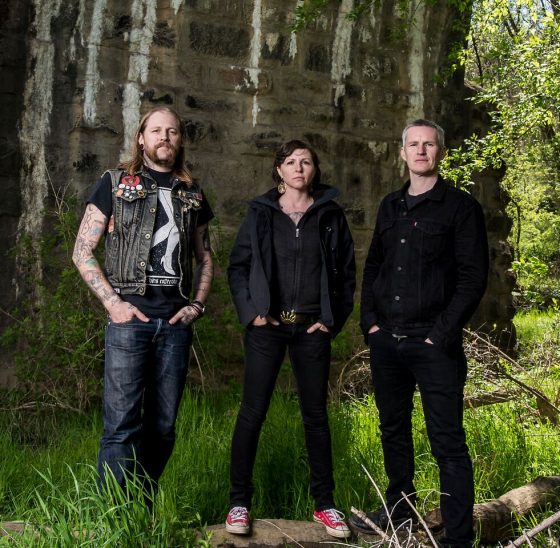 Sonically, Chains Are Broken is a heavier record as well—a natural progression stemming from the band’s live show.

“I think it actually sort of unfolded in the live show over the years, playing with a drummer, and everybody in the band is really into heavier music,” Bernhard explains. “It’s pretty funny, actually, if you like go around the room and ask the band what kind of music everybody’s listening to right now, the answers you get back are really hilarious for the kind of music that we play. We all started out in the punk scene, and as we’ve gotten older, I think Cooper especially got really into sort of slow metal and a lot of experimental music, like drone music.

“So yeah, we definitely made the album heavier just out of our music getting heavier over the years onstage. I think it’s just kind of happened naturally. And it’s also so fun to play like that. I think we’ve always tried to emulate that, even when we were just three people playing acoustic instruments. We always tried to play as fast and hard as we possibly could, so it’s sort of a continuation of that.”

But like their live show, no Devil Makes Three record is immune from being tweaked with and evolving, and Bernhard says the group is eager to see how Chains Are Broken shifts as they take it on tour.

“I think the thing that happens for us, you know, we write a record, we’re excited about it, we go out on the road, and then a lot of times we change it.” He laughs. “We change how we play the songs. We like to do them in a different way, we might change the tempos of them, it’s like things evolve and we find a certain way that we really like to perform stuff. I mean, I think that’s part of why you want to see a band live, too. Just sort of to see the different songs and see how things evolve.”