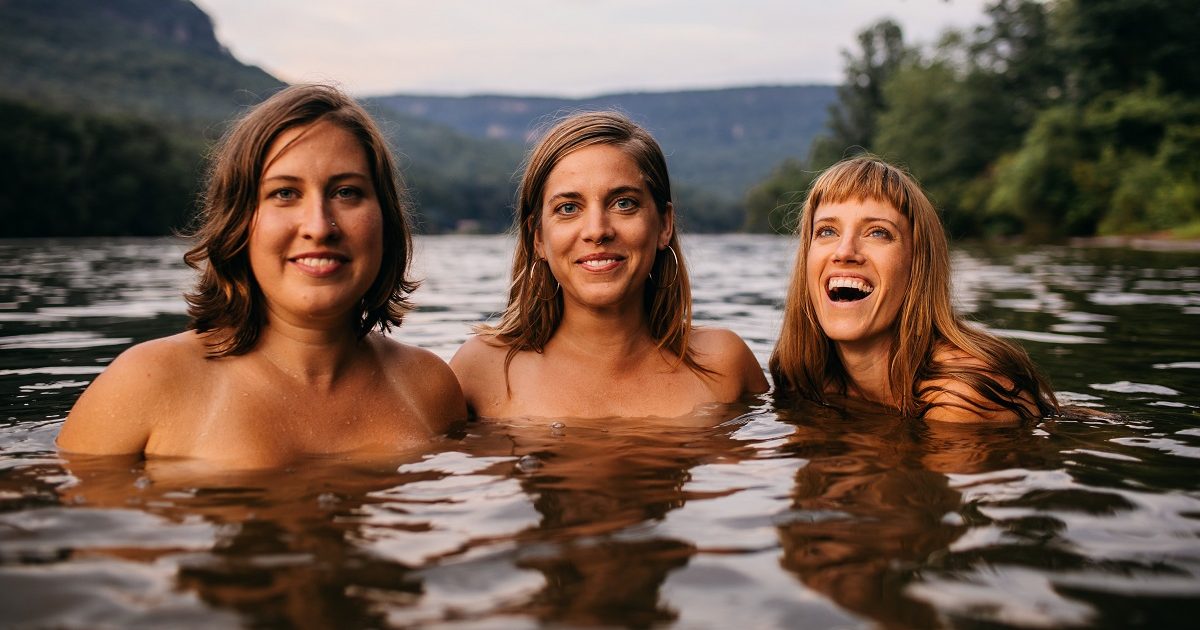 As sisters, our deepest musical influences come from the shared “Crock-Pot” of our household. Our mom is a classical singer and choral director, and daughter of an eccentric music-savant with an encyclopedic knowledge of Gilbert and Sullivan. Our Amish-born dad was raised in the shape note choral tradition, but flew the coop and became a guitar-plucking singer-songwriter in the vein of Paul Simon and Dan Fogelberg. We were raised on music with an emphasis on voice — Joni Mitchell, Carole King, Ella Fitzgerald and loads of art songs and choral music from all over the world.

We began playing together as a cover band, dipping into our teen favorites, from TLC to the Andrews Sisters, Sparks to ’90’s boy bands. Now that we’re writing our own music we’re pulling from an even broader scope, from the Brazilian and West African percussion Rachel studied in college to Amelia’s obsession with ’80s French pop to Rosie’s deep love of classic rock radio hits.

This playlist is a sampling of vocal-centric artists that straddle the line between various types of pop and folk music that are either currently playing on our speakers, or artists whose DNA flows through the music we make. — Call Me Spinster

Pinc Louds – “Soul in My Body”

I stumbled across this band only recently and am obsessed. The power and vulnerability of Claudi’s voice is mesmerizing, and I love their use of raw percussive sounds like the kalimba, held together with synthy glue. – Amelia

DakhaBrakha formed as an avant-garde theater phenomenon in Kiev, and pulls together folk traditions and soul/pop in a way I’ve never heard before. I love the combination of acoustic instruments like harmonica, glockenspiel and bowed cello/bass with some electric twangs throughout. – Amelia

This song began as a sort of call and response, a cappella lullaby. We toyed around with the idea of keeping it that way, using only body percussion. As we started building it, though, Rachel started hearing a samba-style bateria. As layers quickly snowballed, we started calling it our “Lion King song,” including elements like strings and cymbals that aren’t elsewhere on our EP — but still built around that simple vocal call and response. – Amelia

I first listened to this song when a friend told us to cover it — but we didn’t dare touch it, because it is perfect. Fiona Apple’s frenzied energy building in layers and countermelody, on top of a rumbling drum and dissonant keys makes me feel like a sleepless night after a killer date when you feel like your heart might shake down the walls of the apartment. – Rosie

Zap Mama was a staple of our combined middle/high school CD collection and one of the most memorable groups we’ve seen live. It’s a group of badass women led by “Zap Mama” Marie Daulne who mix pop, jazz, and folk. They’re living proof that voices can be anything and all other instruments are extra party. That party brings in elements of funk and hip-hop throughout the song, but goes back to a cappella sounds at the end, reminding you what the true elements are. “Chante, chante, she say, she say.” – Rosie

Rubblebucket – “On the Ground”

I have listened to this album on repeat over the past few years. It makes me dance and cry. Kalmia Traver’s honest and unfettered vocals feel like a best friend reminding me to look around once in a while and stop taking things so f-ing seriously. – Amelia

Heaven or Las Vegas is one of my favorite complete albums of all time. Elizabeth Fraser’s uber-melodic, acrobatic vocals were the obvious draw for me, but as we incorporate more electronic elements into the songs we’re working on for our first full-length record, I am paying closer attention to their perfect cocktail of dreamy distortion. – Amelia

Catherine Ringer is one of the most balls-to-the-wall performers ever, not only in her vocal style, but [also] the weird visual worlds that she and Fred Chichin created over the years. If you haven’t seen the music video for this song or for “Andy” do yourself a favor. We are often drawn to artists whose visual aesthetic seems inextricable from their music: Kate Bush, Tyler the Creator, FKA Twigs, etc. – Amelia

One of the driving forces for finding new music is making playlists for my yoga classes. “Awoo” has a way of wiggling into many — it has the perfect blend of joyful yet meditative vocals and groovy yet simple rhythm. I love when the voice can be a percussion instrument without sounding like an a cappella group. Janelle Monae and Kimbra also nail this vibe. Lim Kim just hits right every time. – Rachel

Alabama Shakes – “Gimme All Your Love”

This album took us by storm as it did so many — and we keep coming back to it again and again, particularly as we began our recording journey. Brittany Howard has the rare ability to harness the raw energy of her live performance in the studio, and the pacing and build of her songwriting is so unusual and satisfying, like the turn in the middle of this song and the build towards the end. – Amelia

Björk gives us all permission to feel epic feels with few words and ear-dazzling, diverse orchestration. She has been hugely influential for us and so many artists across genres for multiple decades, probably even in bluegrass. I would love to hear a banjo choir re-make of her album Post — just sayin’. – Rachel

Juana Molina has this super sexy and intimate way of singing that feels almost like the microphone is lodged inside of her. Her songwriting always has a trance quality, with a wink. It lulls you into a dream and then adds a tickle to make sure you’re really listening. – Rachel

Judee Sill – “The Lamb Ran Away with the Crown” (Remastered)

We had to include at least one of the great earnest singer-songwriters of the ’60s/’70s, and who better than the enigmatic, bank robber-theosophist-composer Judee Sill? One of our own songwriting tendencies is writing singable songs that have something sneaky lurking underneath — a disjointed rhythm, an odd structure, an unusual chord progression… perhaps this is the ghost of Judee. – Rachel

We grew up falling asleep to our dad picking guitar in the living room and this pattern mixed with Lucy’s lilting and beautifully raw voice is everything that is home. – Rosie

I also play in a band called Holy Sheboygan and our first gig ever was in Hammond, Wisconsin’s (pop. 2000) Earth Day Celebration. The lady who hired us pleaded for us to cover “Hammond Song.” We haven’t yet, but we did fall in love with The Roches. The shout-singing style is very reminiscent of our Amish family’s shape-note vocal production, the cascading almost choral songwriting, shameless unisons (#sistergoals), and the drone all fit right in to our sisterhood of sounds. – Rachel