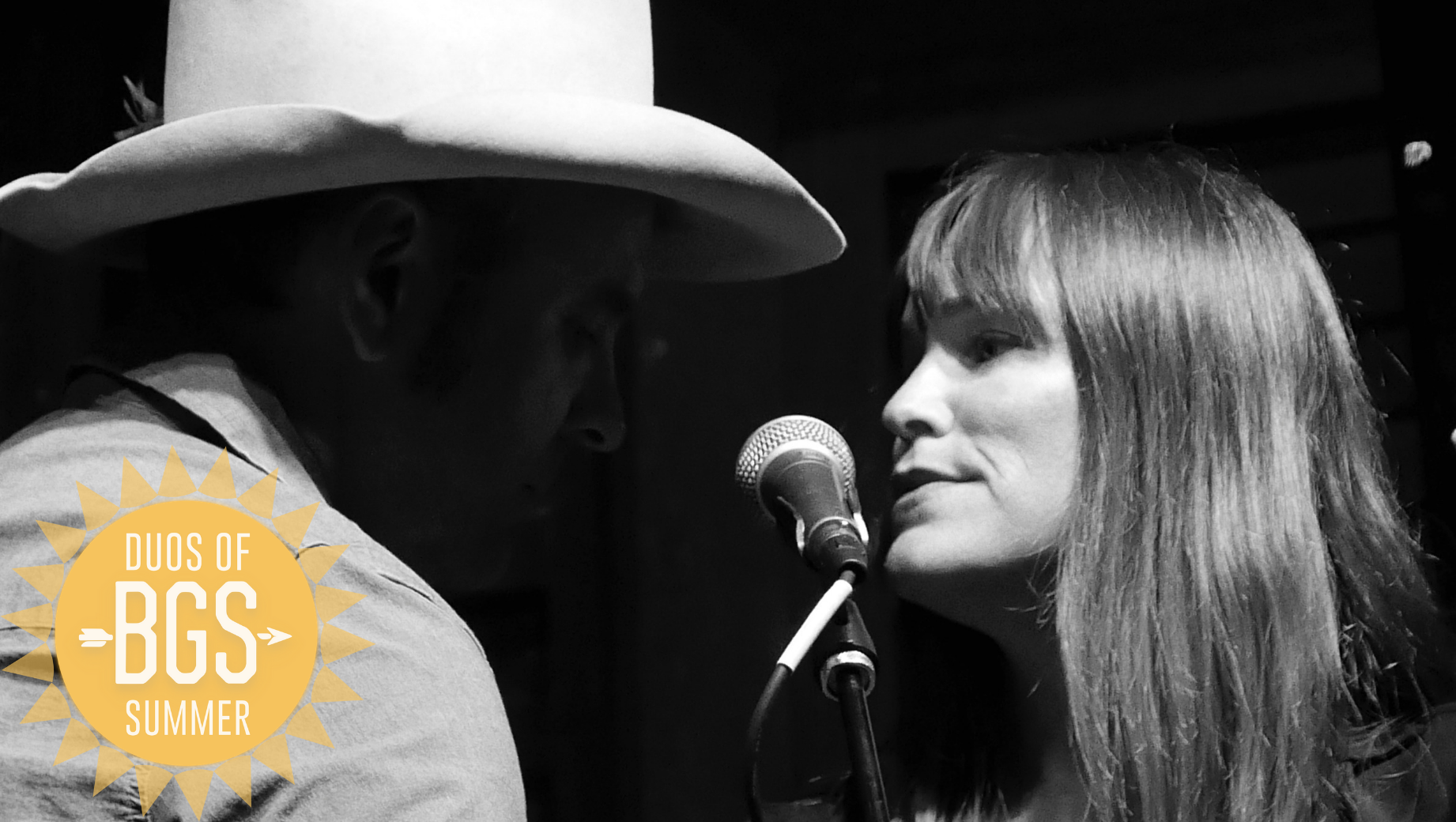 Ah, the mixtape. Playlists. Songs. BGS asked us to do a mixtape and we decided it would be fun to ‘mix’ it up with a bunch of our favorite duos. A lot of them we just pulled off of our Wild Ponies Friends and Neighbors playlist. The hard part was narrowing it down. We threw in a few ringers who aren’t really our friends or neighbors — but we wish they were. There are so many ways to present music. We love a great big band, a power trio, a solitary soul with an acoustic guitar…

But there’s really something special about two voices working together, spiraling into that rare space that makes the whole room levitate. There’s a push and twist. If you’re at a show you can see it in the performers’ eyes when it locks in and happens. But if you can’t be at the show the next best thing is to close your eyes and just listen to the music. If you sit real still you might even be able to levitate at home, just a little. It’s worth a try. — Doug and Telisha Williams, Wild Ponies

Stacey Earle and Mark Stuart – “Next Door Down”

Oh, y’all, where do we even start with Stacey and Mark? We would not be making the mixtape or probably even be in Nashville without the support and love of these two. We picked “Next Door Down” from Simple Girl, because it was this release that began our love affair with Stacey and Mark. I’m pretty sure we can still play each and every song on that record!

Well, our first dog was named Annabelle, after this song. That’s just how much we love Gillian, Dave, and this record.

We’re so excited about Buddy and Julie’s new record, but we reached back in time a little on this one. When I listen to this song (by Richard Thompson?), Buddy and Julie’s influence on Wild Ponies’ sound is so evident.

Porter Wagoner and Dolly Parton – “Put It Off Until Tomorrow”

Oh, Porter and Dolly, one of the original duos. Each of them is such a talent, but together, there is magic — a third, indescribable element that elevates the song,

John Prine and Iris Dement – “In Spite of Ourselves”

Come on, John Prine AND Iris Dement. Our love for both of these superstars runs deep, but the blend of their quirky authenticity is stunning.

The Louvin Brothers – “My Baby’s Gone”

There’s nothing like family harmony. We were lucky enough to get to know Charlie Louvin later in his life, and the stories he shared about singing with his brother were slightly terrifying and beautiful. All the years after Ira’s death, Charlie could still hear Ira’s voice and his part every time he sang. The way that they could seamlessly switch parts and cross each other’s lines is something that maybe only those that share blood can accomplish.

Singing this song live each night has become a favorite spot in our set. There’s something in the intimacy of our vocals — even just the “ooohs.” It almost feels like we’re sharing something that the audience shouldn’t be allowed to see.

Robby Hecht and Caroline Spence – “A Night Together”

Robby and Caroline are both amazing singers and songwriters. Two of our favorites in Nashville, right now. This duet record is absolutely stunning. I hope there’s another coming.

This song was released before I was born, but feels like the soundtrack to my childhood. I think I can even smell the chicken casserole cooking in the oven.

The Everly Brothers – “All I Have to Do Is Dream”

This is what every duo wants to sound like. Period. Anyone who tells you different is either lying or they’ve never actually heard this track.

Freddy and Francine – “Half a Mind”

I’m so happy that Lee and Bianca (aka Freddy and Francine) are in Nashville now. Their show and sound is amazing! Don’t those tight, powerful harmonies make you want to move?!

I challenge you to pick out who is singing what part with these two. Chuck and Mira’s voices blend so beautifully together, that it’s easy for me to get lost somewhere in the space between.

The White Stripes – “In the Cold, Cold Night”

Bad. Ass. The White Stripes make me want to break all the rules. This is such a cool track, because it’s mostly just Meg’s voice and Jack’s guitar. I guess not technically a duet, but it still feels like one. So intimate and creepy.

Anana and Irakli are just weird and cool. Their writing is so big and theatrical. I love what they do. You should really go see them live — you can’t look away. They’re so good.

Similar to the Conway and Loretta tune, this sounds like my childhood, only this time the smell is my daddy’s truck instead of chicken casserole.