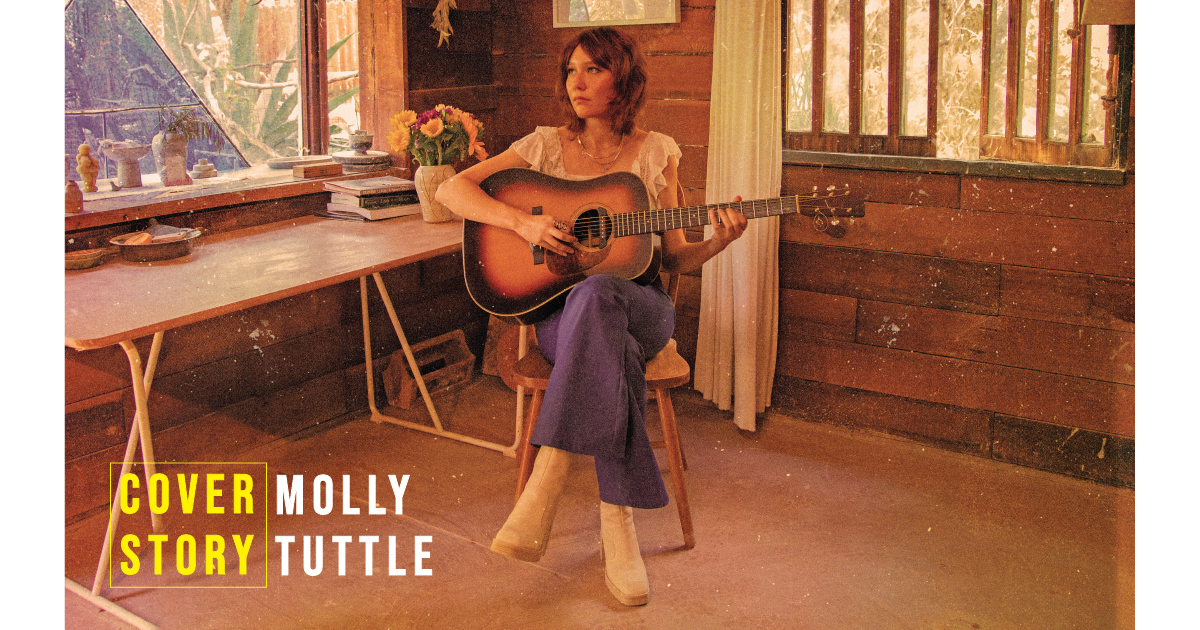 Crooked Tree is Molly Tuttle’s third full-length album and her first officially fronting a bluegrass band, but the 29-year-old-picker has been pushing the genre forward for the better part of her life. She started playing guitar at 8 years old and playing live onstage by age 11, often performing alongside her father or as part of a family band. In 2017, she released a debut EP, Rise, and became the first woman to be named (or even nominated as) IBMA’s Guitar Player of the Year; she then promptly turned around and took home the award again in 2018. She’s collaborated with Buddy Miller, Béla Fleck, and Bobby Osborne, and participated in a supergroup with fellow trailblazers Alison Brown, Sierra Hull, Missy Raines, and Becky Buller.

So it’s no surprise that Tuttle nabbed an impressive roster of guests for the new project, including producer Jerry Douglas. Ketch Secor, with whom Tuttle has toured and collaborated frequently, co-wrote eight songs on the album and joins Tuttle with his band Old Crow Medicine Show for “Big Backyard.” Gillian Welch offers a clever duet on “Side Saddle,” a song that makes an apt metaphor for busting up Nashville’s old boys club. Billy Strings—once a roommate of Tuttle’s—appears on standout track “Dooley’s Farm,” while Hull, Margo Price, and Dan Tyminski also join the party.

Even as the new collection demonstrates a close-knit music community coming together, its takeaway is just as much about the beauty of setting yourself apart. “I named the record Crooked Tree because I want it to be about embracing your differences,” says Tuttle.

Here, BGS catches up with the Nashville-based musician about the bluegrass voices that inspired her, the long road to embracing her own perceived imperfections, and why it felt right to dedicate this latest work to her paternal grandfather.

Tuttle: I did go back to people like Peter Rowan, John Hartford, Gillian Welch. Those were some of the people who influenced the songwriting on this record. I think those artists have a way of telling stories that you don’t always hear. I wanted this album to feature a lot of different perspectives, ones that maybe you don’t always hear in Bluegrass songs. John Hartford in particular has such a playful way with his lyrics. He obviously was a master of bluegrass, but with his songwriting and with his albums, he took it in new directions that were maybe a little more folky sometimes. He definitely pushed it into new territory.

Hearing what an influence Gillian Welch had on the record, I imagine it must have been wonderful to have her collaborate with you on a song. How did “Side Saddle” come together?

It was so exciting to have her come into the studio. I sent her a couple different songs—I knew that it would just be amazing to have her voice on something, but we wanted to let her choose and she chose that one, and I was so happy. We wrote that song from the perspective of a cowgirl who wants to be taken seriously, and that’s how I felt a lot, as a guitar player, especially. I’ve often been the only female guitar player around, and Gillian Welch is one of my biggest heroes. She’s been such an amazing role model for me, as an incredible musician and also just such a strong woman who writes amazing songs.

Hearing the lyrics to that song, I wondered: Is there any moment or memory where you felt like you were metaphorically asked to “ride side saddle” when you didn’t want to? How did that impact your path as a musician?

When I was a kid, I had so many amazing female role models in the Bay Area, like Laurie Lewis and Kathy Kallick, who both lead their own bands. It really felt like there were so many women who played music that I could be friends with and who could be mentors to me as a kid. But when I went to music school, I realized I was the only female in a lot of my guitar classes—it did feel like I was often the only woman in a room. Sometimes I had teachers making weird comments—one time a teacher told me that I “played really feminine”—so I just feel like people were often singling me out for that reason. I found that in jam sessions too: I remember one jam, in particular, when I knew most of the people in the circle. But there was one person I didn’t know, and he specifically skipped my solo every time I came around. The only woman in the jam circle, and I’m like, “Really? You’re going to go out of your way to skip my solo?” So yeah, I think there are times like that where I just feel like, “Come on!”

There’s a line in “Grass Valley” that I really love about a shy kid with a mandolin, and it feels like an overt comparison to your own story as a young child excelling at music. Are there any things that you wish you had known when you were first starting to play?

I definitely knew as a kid that I had to work really hard, and I think I did work really hard at music. But I didn’t always know to believe in myself—to just feel confident. I felt like I always had to critique myself and always push to be perfecting my playing and singing. But really when I gave that up is when I made the most progress; when I felt more confident in myself.

What do you feel was your biggest challenge in getting this record together?

Well, I probably spent the most time on the songwriting, but that part felt pretty natural to me. I think the challenge came when we were cutting the album. We were doing it in a really short amount of time and wanted to keep everything really spontaneous and live. But it’s like we were saying before—you have to let go of perfectionism. It was hard for me to sing my vocals live and not want to critique every little note that I sang, go back in and overdo them a billion times. Jerry was really cool about that. He didn’t want us to have too much time where to go in and try to change everything afterwards. That was a new experience for me.

You co-wrote all of the songs on this album, several of them with Ketch Secor of Old Crow Medicine Show. One that stands out in particular is “San Francisco Blues,” which has plenty of modern-day references but feels somewhat timeless. How did that one come together?

We both love the old-school bluegrass sound and old-time music, and we both care a lot about songwriting and stories—and updating old stories. On “San Francisco Blues,” Ketch kind of helped me figure out how to incorporate some of those old song forms. That was probably like that song took the longest to totally finish… When I brought in the old format of a blues song or a song about having to leave home, that’s when it really clicked. I kept some of the current stuff, but also incorporated more old-school language into it. It really helped the song live in both worlds.

There’s a lot of rural imagery on this album. Was there any place or trip that specifically inspired those scenes?

Right when I was in the middle of writing the album, I drove up from Nashville to visit my grandma in Illinois. My dad grew up on a farm in a town called Yorkville. My grandma still lives on some farmland that my family owns, and while they don’t own the house where my dad grew up anymore, it’s still just down the road from her house so we drove out there one day. We probably technically weren’t supposed to be walking around but we walked around the old farm: All the buildings are all boarded up and it’s a little overgrown and the house is kind of run down now. It was a little sad to see, but it got me thinking about where bluegrass started for me. My grandfather was a farmer, but he also played the banjo, and he taught my dad how to play and my dad taught me how to play. That rural landscape really has influenced me, even though I didn’t grow up there.

You even dedicated the record to your grandfather, Gerald Tuttle. Are there any qualities that you feel that you inherited from him?

He was just such a hard worker. That definitely influenced my dad, and I think my dad tried to instill that in me and my brother. And then, of course, just seeing the farm and the music that he loved. And I think it’s cool that he worked so hard at his farming, but he also had this other side to him. He’d always show me videos of Elizabeth Cotten playing guitar and he loved Hank Williams. He just had such a strong passion for music—I don’t know if I would playing music if it weren’t for him. I thought that he would be happy that I finally made a bluegrass album.