New Book Pulls Back the Curtain on Nashville 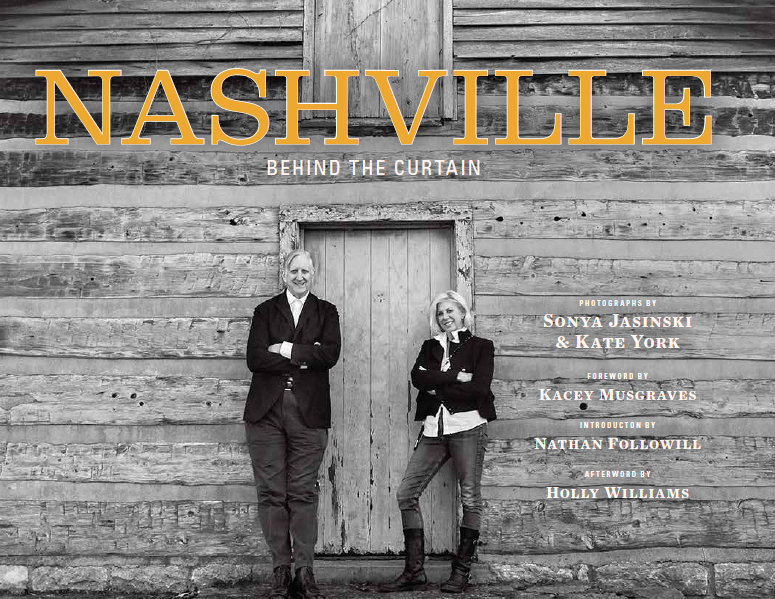 Nashville has had a rich cultural legacy for decades now, one deeply rooted in country music and Southern tradition. In more recent years, however, Music City's lesser known, non-country creative community — which boasts talent from all genres of music, as well as fields as varied as the culinary and visual arts — has gained national attention, earning praise from the New York Times, inspiring the televison show Nashville, and drawing an average of 1,500 new residents per month. In short, Nashville has been having a moment. Photographers Sonya Jasinski and Kate York sought to capture Nashville during that moment in their newly released book, Nashville: Behind the Curtain.

"Almost three years ago, Sonya was traveling back and forth, shooting artists here and we met through a mutual friend, Lucie Silvas, in town. Once I saw her photography — and I had just started taking photos myself — we both realized we had similar eyes," York says. "We started talking about what was happening in Nashville right now and how it’s such an incredible place that everyone seems to be wanting to move to, and it’s not just about country music anymore. I’m a songwriter and I was finding myself in a lot of interesting spots, as far as people I was collaborating with and moments that I really wanted to capture. So we decided to put this project together about all of the different creatives in Nashville, from songwriting process to the artists and producers and the whole collaborative part."

The book — which features a foreword from Kacey Musgraves, an introduction by Kings of Leon's Nathan Followill, and an afterword by Holly Williams — highlights Jasinksi's and York's insider's view of the city, with a stunning collection of portraits of Nashville figures, ranging from country legend Emmylou Harris to Nashville actress Connie Britton to super producer Jay Joyce. A songwriter herself — she's responsible for several of those Nashville tunes you know and love — York counts many of these figures as friends, giving the book itself that same feeling of community for which Nashville has come to be known.

"I’ve been writing in town for over a decade, so a lot of the people in the book were already friends of mine," she explains. "Through the show Nashville, as well. Everybody just seemed really on board with it. We pitched the idea, and then our publisher wanted us to incorporate stories, as well. Originally, it was just going to be photography and it sort of morphed as we were putting the project together and it turned into us getting artist contributions and stories, asking everybody a few questions like, ‘What’s your favorite Nashville moment? What do you love about this town?’ As the stories started coming in, that’s what solidified it for me as a project. It made it feel real, and not just photography. "

Those stories, which show a deep affection for the city from both old and new residents, paint Nashville as a haven for creativity, making it no wonder so much talent and so many people have flocked here in the last few years.

"Reading people’s stories that are newer in town and seeing their outlook on how everybody has embraced them was really special, I thought," York says. "Mary Steenburgen … her contribution is one of my favorites in the book. We were writing together a few years back and that’s how I got to know her, because she’s become a songwriter later in life. She comes from the whole Hollywood scene, obviously, and once she moved to Nashville, she could not believe how many friends she had overnight. Whereas in L.A., she’s been there for probably 30 years and she said she can count on two hands how many close friends she had. When she moved to Nashville, she felt like she had a hundred immediately. I think people that move here from other cities, that seems to be kind of the overall feeling of Nashville. It’s very welcoming and not competitive. There’s a very strong community here, and you can feel that."

Get your own copy of Nashville: Behind the Curtain here.