Old Crow Medicine Show: “Time to Start Doing Exactly What We Feel Like Doing” (Part 1 of 2) 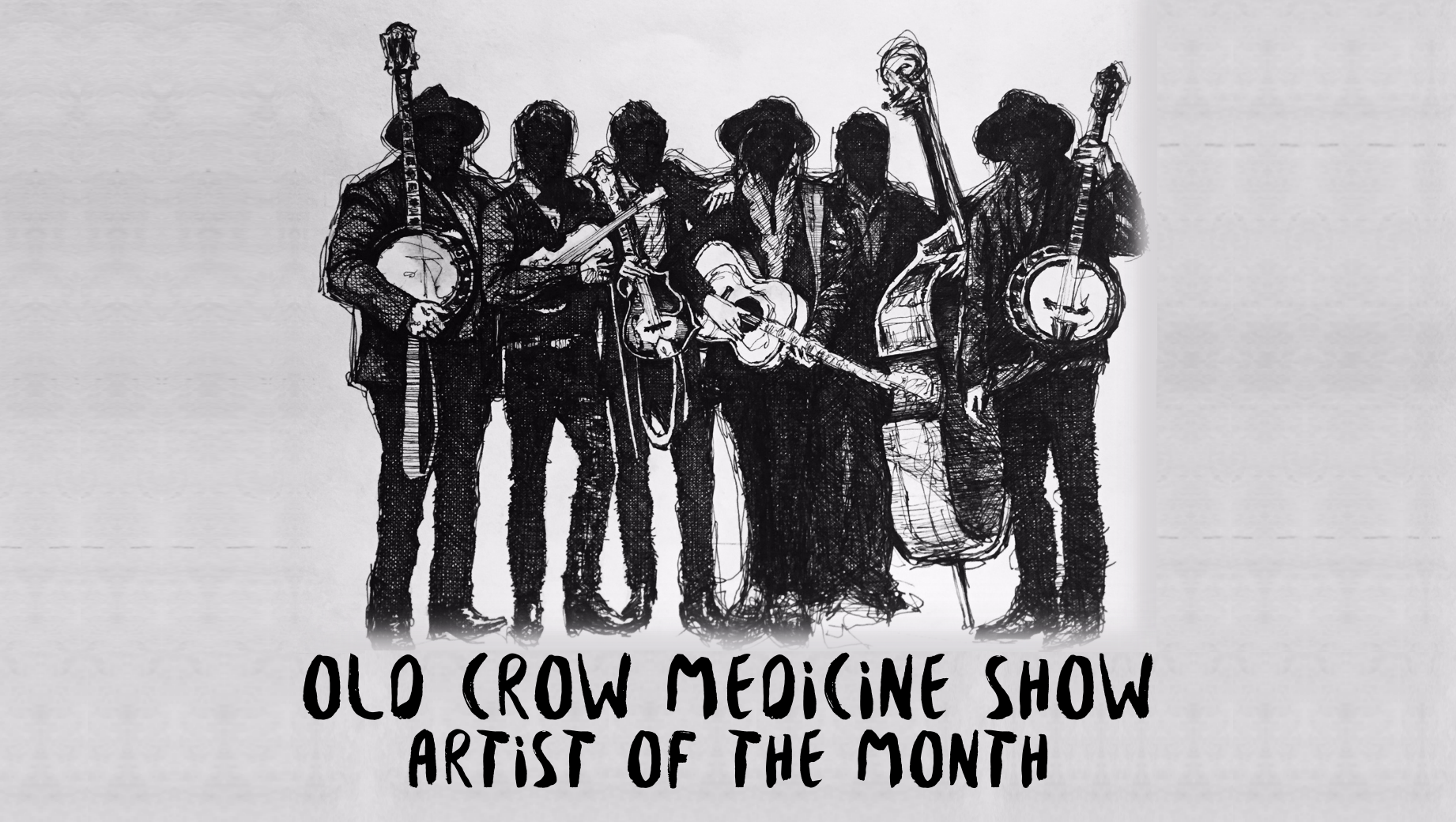 I can still remember the first time I saw Old Crow Medicine Show live. It was a sweltering summer night in Nashville around 2008 (back before the bachelorettes and Bird scooters) and they played from a massive barge moored at Riverfront Park. The thing was huge — far too big for six skinny street musicians to budge — but I swear it moved while they stomped and hollered, the Cumberland rolling by lazily behind them.

I was familiar with the band and already loved the unapologetic mix of tradition and edgy intensity, but that live show was revelatory. It gave me a new appreciation for the sense of community Old Crow was trying to forge, so it’s always surprised me that they didn’t record live albums. That has finally changed with this month’s release of Live at the Ryman.

Backstage at the Grand Ole Opry House on another hot summer night, front man Ketch Secor spoke with BGS about the project, why Old Crow is just now getting around to a live album, and what their style of music needs most right now.

BGS: Part of the idea of this album is that Old Crow has played the Ryman over 40 times. For a band that started out busking in the Northeast, how does it feel wrap your head around that?

Ketch Secor: Actually, I wish I had a real count because Lord knows I’ve played there more than 40 times. I think that’s how many times we’ve headlined, but if you add them all up I bet it’s a triple-digit number. We’ve been openers there for Dolly Parton back in 2002 for, like, a daytime show. We’ve done a lot of film and television there, all kinds of awards shows. It always felt like the place to shoot for — it’s the moon, the Ryman Auditorium, and we were always a shoot-for-the-moon kind of band because we figured “Well, we’re not supposed to be here anyway, so we might as well try and go as far with it as we can.”

You self-released one live album in 2001, and then nothing else until now. Why did it take 18 years to do another, since the live show has always been the foundation of what you guys do?

Oh, I think because we’ve always tried to put out a new studio record every couple of years, and here at the 21-year mark it’s probably time to start doing exactly what we feel like doing.

You haven’t been doing that the whole time?

Nah, not with those studio records. There’s a lot of stuff you’ve gotta do. Yeah, we always did it “our way” in the fact that we always played our own music. But just being in the music business means doing it everybody else’s way.

So you had to make a few compromises here and there?

Oh yeah, there was a lot of playing the game in ways that never seemed to pan out, but it never stopped us. That was just the way it was, and we were impressionable, so that’s what we did. We did it the way we were advised to do it.

Can you elaborate a little?

Like playing Napster. Doing shows for radio programmers in L.A. who never played us. Trying to make videos for CMT that were never in rotation, ever. …Opening up for Carrie Underwood at [Country Radio Seminar], it’s like, “What were we doing there?” Those guys, they might have liked it, but they were never gonna play it. And I don’t care if they like it, I want them to fucking play it, or I don’t want to play that show.

So now that you feel freed up to do it your way, what’s that look like?

“Tell it to Me,” “Methamphetamine,” those are interesting songs to present because rural America has a new drug problem going on with opioids. Why is it important for you guys to sing songs like that, especially at the Ryman?

Well, “Tell It to Me” was recorded in Johnson City in 1928 I think. The band that brought that song to the studio had been an original backing band for Jimmie Rodgers… Anyway, I’m just saying this because if you like country music, you should probably know that drug songs have been part of the canon since recording studios first illuminated a red light bulb and said, “You’re on.”

I don’t think people do know that. We’re just now starting to get radio songs with pot references that people don’t flip out over.

Yeah, I mean it was blow in the ‘20s and now it’s pot in the 2010s. And then “Meth” is a really different kind of song because it’s more topical. We recorded it a long time ago but it seemed important to bring it back and revamp it, make it more intense, and Charlie Worsham plays some really great electric guitar on it. It just feels like it’s knocking on your door, like a hurricane.

We were down in Oxford, Mississippi, doing a show with Margo. She was opening up for us down there near Ole Miss, and we were looking for a song that seemed to fit, so we tried that one. Our duo thing felt really good, and I feel like I’m a little bit in the Conway range — and she’s definitely in the Loretta range — so it worked out pretty good. We heard the playback we thought it sounded great so we wanted to put it out. I saw her at the grocery store the other day and she said she loved it.

Why did you include a song like “C.C. Rider,” which has Lee Oskar playing harmonica?

I really love his band War. We did “Lowrider” onstage at the Ryman, too, maybe that will come out on Volume 2. But what I really loved about that moment on the Ryman recording is that it has twin harps. You know the old guys don’t have their pictures up here [gestures at photos of Opry stars on the dressing room wall]. …But the story of the twin harp playing of the Crook Brothers — Herman and Louis Crook — lives a long time, because Herman and Louis lived, like, into their 90s. What they were great at was two harmonicas playing in unison.

That’s interesting. In your music you’re often looking to the past for inspiration, but what do you think is the future of string bean …. er, string band music, Americana?

You just answered it, man. We need a new Stringbean. Nobody’s acting like that and that’s what’s missing. Who’s gonna be the clown? What happened to the kind of entertainment that’s self-effacing? Everybody on this wall loves the clowns, but none of them are. They’re “the vocalists” and we’re supposed to take them seriously. I’d love to see this genre — whether it’s country or Americana or whatever — just not take itself so damn seriously. Let’s just have a grand ole time. Let’s poke some fun at each other, and especially at ourselves. I’d love to see that.