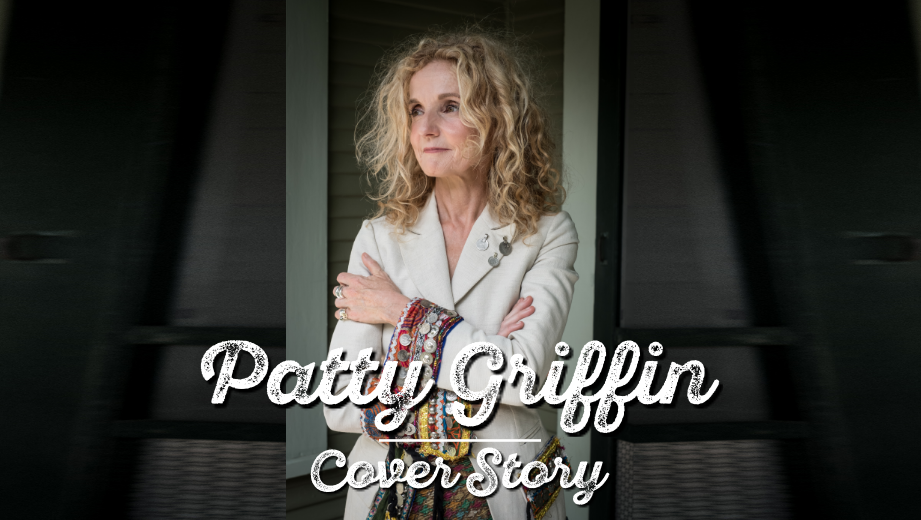 Reflecting the fortitude shown by the characters she’s written about for the last two decades, Patty Griffin made the decision to keep on working when her singing voice disappeared, the result of a battle with breast cancer in 2016. With encouragement from close friends and her own determination to carry on, Griffin spent a year writing and recording at home in Austin, Texas, ultimately regaining the strength to create her new, self-titled album, perhaps her most stripped-down work since her stunning 1996 debut, Living With Ghosts.

Speaking by phone in the middle of her American tour, Griffin offered insight into new songs like “River” and “Had a Good Reason,” and shared her love for her dogs, her guitar, and her dedicated fans.

BGS: On your new record, I keep going back to the song “River.” What was on your mind when you wrote that?

Griffin: I had been spending time with Donny Hathaway’s version of Leon Russell’s song, “A Song for You.” I actually covered that song for a little gig where I decided to do all covers. The song just kind of kicked my butt. Leon Russell is writing about something with this super sharp honesty, it’s almost like confessional, and it’s sort of healing for him and for whoever he’s singing that to.

And then Donny Hathaway picked it up and ran with it. It’s so true that it moved right over to Donny Hathaway’s voice and became his song. Just the feeling of that made me want to try to write “River.” Like, what’s down in there that I want to say, and that makes me want to sing this song? What do I have of my own to say that feels like that?

I noticed the lyric in there: “She’s been left for dead a million times / And keeps coming home, arms open wide.” That lyric seems like it might be emblematic of this record – that notion of mortality and making it through. Is that fair to say?

I think that’s fair to say, but in my mind it goes between me, as a part of nature, and what nature does. We’re beating up on this planet as fast as we can, tearing down trees. Forgetting all about the rivers, but the rivers are going to be here long after we’re gone. The rivers just keep going. There’s something in us that no matter how far away we get from understanding how we’re a part of this big incredible magical thing — this existence that no one really understands — we still are! It’s always there to go to, and in us, too.

Is this a new perspective for you? Did it hit you within the last couple of years to write about that broader scope?

I think I’ve tried to do that. But I think honestly as you get older, you do learn more about the broader scope, you know? I don’t know. Sometimes I feel like the more I go along, the less I know, too. (laughs) So I don’t know. That’s a question mark from me.

I had read that you had lost your speaking voice and your singing voice in the last few years.

I believe leading into being diagnosed with cancer, I may have had it for a while. So, your immune system’s working pretty hard. Your body’s amazing. It works pretty hard at trying to eliminate it. So I was out on the road a lot, which is a good place to get sick, even on a good day. I was just getting cold after cold after cold after cold. Like one long, non-stop respiratory illness. It depleted the strength of my voice quite substantially, and then you know, you’ve got the diagnosis. There’s the surgery that’s not so hot for singing. And then there’s the treatment, there are the drugs… it was sort of this cocktail of things that finally depleted it to something I didn’t know how to use at all, and couldn’t use at all.

So, there were a few months there where it was pretty bad. I wasn’t sure what to do, but I knew I wanted to keep playing, so I just kept writing. And I thought, people do this. People’s voices change all the time and they keep going. You know, my old friend Robert Plant talked to me a little bit about that, just how he doesn’t sing those high notes anymore. (laughs) He doesn’t like to sing those high notes, but he’s discovered this other part of his voice that, to me, is so much more beautiful. So, things like that, and other moments like that that I thought about as I was going along. You know, [thinking] I’ll just have to figure this out — keep writing and figure this out as I go, what I can do next.

Where did you record this album?

Most of it was done in my house in Austin, Texas, with Craig Ross. [Recording engineer] Mike Poole came down from Nashville, and we set up the gear in my house. We did that with Mike a couple of times, and then the rest of the time throughout the year — it took about a year to do it — Craig and I worked on it, in the house mostly.

So, when you’re talking about your house, is that a home studio? Or more of a living room set-up?

Yeah, the dining room table, the living room, and the kitchen.

I feel like I can hear my house in it, for sure, and I like that. But also it took the heat off me. It was Craig’s idea to do it this way, just sort of explore, without the pressure, what we had and what we could do. He was very positive about it, just hearing a few songs that I had from the get-go. He’s a dear friend of mine and I think he was huge part of this. I love his production style anyway, but beyond that, he really guided me with it and was just a friend. He said, “You can do this. Let’s start and see what we got.”

The guitar playing on this album is exquisite. How did you come to pick up the guitar and develop that talent?

I just thought it would be a great tool to write with. I thought, when I was a teenager, ‘How do these people come up with these songs? And how do you make a song happen and not depend on somebody else?’ (laughs) I got a Hohner guitar for $55, which was really the entirety of my savings account when I was about 14 years old. The strings were probably a half-inch off the neck, you know? It really hurt your fingers to play, and I started taking guitar lessons with that.

And I hated the guitar, honestly, until I was probably in my 20s. It was just really a tool. Then I started understanding that it’s also a percussive instrument, and when I saw the “Bluegrass” word next to who I was going to be talking to today, I said, “Ohhhh!” (laughs) That’s some serious playing going on there! I’m just more of a “feel” person. I experiment more than I used to on guitar. I really started to love it and it’s more of a comfort to me, like singing. So, I’ve made friends with it. I even have to say I love it. We’re like an old couple now.

I would be remiss if I didn’t mention the cute dogs on your album cover.

Awwww, those are my boys. Sal is the brown guy and Zeke is the blond guy. Zeke was actually in the original photo at my feet. You can see in his eyes that he was protecting me from Michael Rosen, the photographer. (laughs)

You have a way of bringing your family stories into your music. How has your relationship with them affected your musical direction?

They shape who you are, whether you are close to them or not. I think everybody’s been shaped by where they come from. They’re in your DNA and their stories are in your DNA. I’ve just been sort of piecing the puzzle together with them, and it’s been good for me to do that.

“Had a Good Reason” is about a mother-daughter relationship but I don’t know that it’s necessarily about the relationship that you have.

No, it’s more based on a combination of stories that I had heard about Billie Holiday and Edith Piaf. Two of those beautiful singers from the last century with these tears in their voices, and they were rock stars, really almost at the same time in their day. The sadness in those voices — both of them at a certain point had that sort of [tumultuous] relationship with their mother. I believe they both ended up living in whorehouses and being taken care of by prostitutes, and they both were not able to be with their mothers as young girls. I think for a woman, there’s some deep, deep, deep, deep sadness that would happen from that. That was just me making a guess and the song came out around that.

To me, “Luminous Places” sounds like a love letter to your fans. What is it about heading out on the road, and having that audience, that compels you to keep coming back, year after year?

That’s what is so mysterious to me. I feel like it’s mutual generosity between humans, you know? I work really hard to bring them something, but they also bring themselves and give a lot. That seems to be how the relationship works. And the older I get, the more I am grateful for that, and in awe of that. It’s really wonderful.

Is touring going well for you now? Do you feel like you’re back in the game?

I’m having a blast! I’m getting stronger every day out here and I’m working with the greatest people on earth. I’m having a really good time and I’m really lucky.