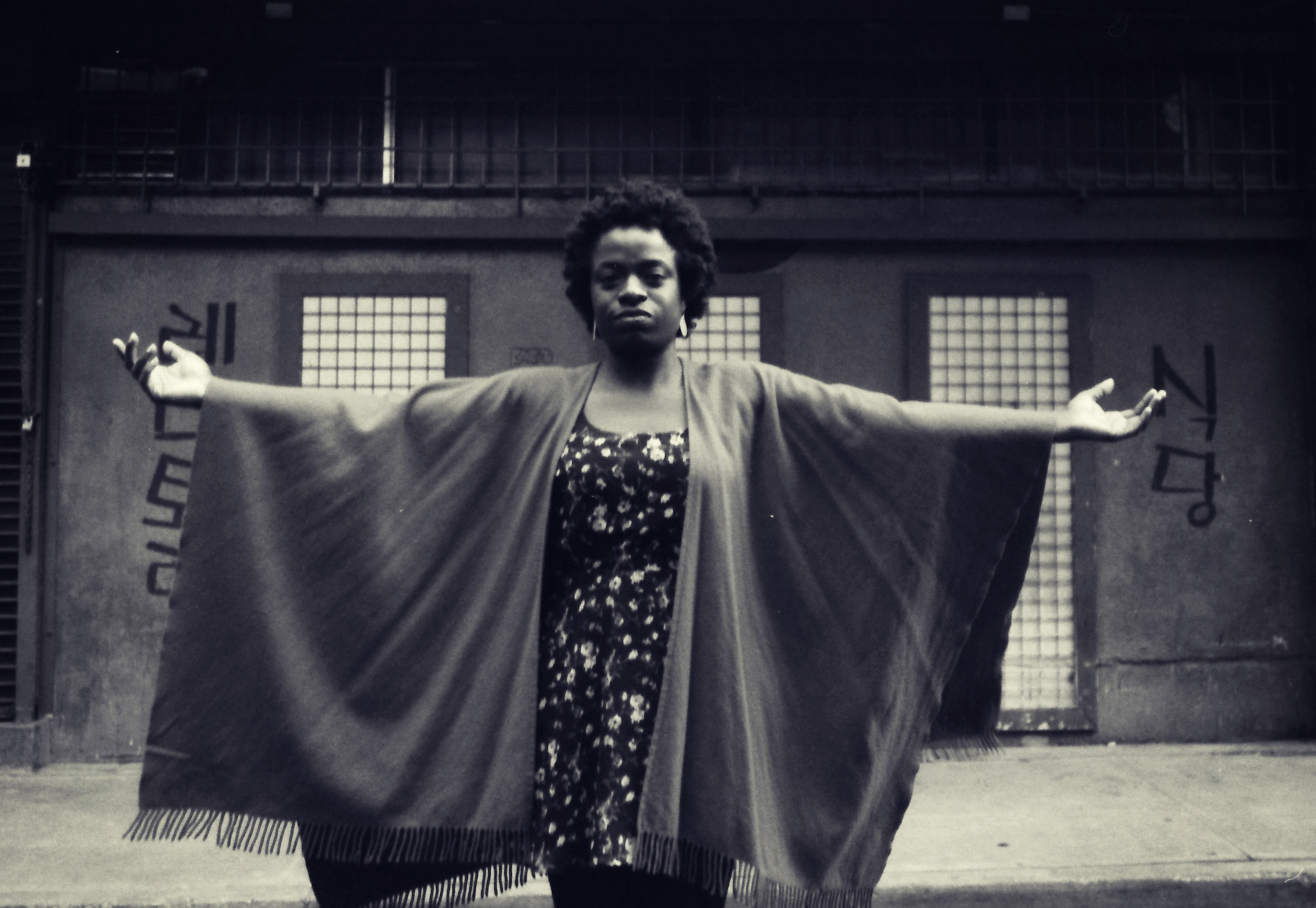 Sunny War (born Sydney Lyndelia Ward) stuns listeners to silence with her guitar playing. For some, it’s the way she plays — her finger’s dexterous ability to reach seemingly impossible places, playing a clawhammer style of guitar most associated with banjo and formerly with acoustic blues musicians. For others, it’s the melodic trance she creates as a result of that skill. Either way, she coaxes strange and hypnotic sounds from her instrument.

The nomadic Sunny was born in Tennessee, but spent her life following her single mother, as the pair moved from city to city and state to state, before she finally settled in Venice Beach, California. There, she picked up busking, a task that situated her at a crossroads involving performance and practice, and in turn helped her hone the guitar-playing skills that continue drawing such attention.

With her 2016 album, Red, White and Blue, Sunny employed a more traditional folk sound, but her new album, With the Sun, extends like an elastic to rope in folk-punk and a touch of Malian guitar work. Long drawn to brutally honest songwriting, Sunny challenged herself this time around to work from the lyrics first before building melodies around her words. The result is a set of candid songs touching on alcoholism, police brutality, self-loathing, toxic relationships, and more. If being a confessional songwriter means couching some of that confession, in order not to maintain a certain image, Sunny has no problem laying bare her truth. After all, she’s “Gotta Live It,” as she sings on that track. Her husky voice warbles for effect against her soft, melodically laced guitar, reminding listeners that the human experience is messy, and all the more beautiful for its imperfections.

Red, White and Blue colored within the lines of folk, so to speak, but With the Sun pushes in messier stylistic directions, and the results are extraordinary. What was the biggest change, in your opinion, between these two projects?

Red, White, and Blue, we had only three days to record the whole thing. I was younger, also. I guess that makes a difference, too, but I didn’t have that much time to even listen to it, and decide if I didn’t like something. With With the Sun, I was able to do stuff over. A lot of the songs on the album had a bunch more instruments on them, and then we would listen to stuff, and we’d write back and forth, and I was like, “Nah, that’s too much.” So now it’s very minimal. But if we only had three days …

Yeah, I don’t even know. I’m a couple years older, and we spent almost a year working on it and not rushing on anything.

Your story struck a note with me because I also grew up moving from city to city. Within that nomadic existence, then, where has your sense of rootedness come from?

I think everywhere I lived, I felt like I was from Tennessee. If I went to a new school, people would say something about how I’d talk. I never had a Southern accent, but it was always a different accent than wherever I was living. When I went to Michigan, they thought I sounded weird. People were always asking me where I was from. I’m from Nashville, so I think I was always trying to hang onto that somehow.

You’ve mentioned approaching With the Sun lyrics first, as opposed to melody. Why set that challenge for yourself?

I feel like I’ve never really had good lyrics, so I just wanted to focus on that. Usually, I just play and I try to think of words that go with whatever I’m playing. I feel like I get trapped in a thing where it’s like I can only fit so many syllables in this space, if I want to use this riff, so I’m putting the guitar before … I may have more to say on whatever the song is about, but because I like a riff so much, I’m like, “No, it doesn’t work. I can’t play this, if I’m singing this.” I thought it’d be better to write poems, and then build around the poems. If you’re that obsessed with guitar, then you should just do an instrumental album or something. It wasn’t balanced.

There are some fascinating juxtapositions in the subjects you cover: “I’m a drunk and a dreamer” (“Gotta Live It”). Why was it important for you to portray this kind of complex humanity?

I don’t know. See, that just blew my mind. A drunk is a dreamer. It’s like you’re trying to stay in a dream state in a weird way.

True, I suppose I was reading it from an escapist point of view.

Yeah, but I feel like you’re only escaping because you’re … not dreaming, but you’re not really satisfied with reality. I feel like I know everything about alcoholics from AA. I’m like, “Man, these are some passionate, good people.” If I try to write — this is a challenge, too, because I have a lot of stuff that I don’t use because I don’t think it makes sense, so all the lyrics that I chose, it’s like there’s a lot of stuff where I was trying to write about a certain subject or something, and I can’t get into it because it was forced.

There’s this band, the Dicks. They’re an ‘80s Texas punk band, and the lead singer is this gay guy from Texas and his dad was a cop, and all his songs are so fucked up. He has a song where he’s like, “Come on and shit on me,” but basically, the whole song, he’s describing how nothing anyone does to him can be any worse than all the shit that’s happened to him. That’s the kind of lyrics I’ve always liked. I like feeling like I’m talking to the actual person because I can imagine he has a personality. A lot of writers might actually be saying something like that, but they’re like, “That’s too graphic.” They try to make it clean. I’m a raunchy songwriter who’s crazy and just says whatever they feel like.

And that’s the thing: Maybe those artists are playing into an image because of the commercial factor.

Yeah! Okay, like now they’re dead inside. They have all these hopes and expectations, that’s the problem. I’ve been trying to be a musician so long, that now I’m just trying to make songs that I like because I’m just like, “Fuck it.” I don’t even know what people like. I feel detached! I felt like I was trying to think commercially, also, but even if you study it — like what is a hit or what is successful musically — it doesn’t even make sense. Even if you’re a logical musician who studied jazz or whatever, it doesn’t even make sense at all. In the ‘90s, I think you might have felt like, “Man, all the music is garbage,” but now it’s like, “Damn, that was really good compared to now.” I feel like there are cool scenes you could try and fit into and still feel respectable about your own … I don’t know. I can find a lot of independent music that I love, but I don’t even know what it means to be a commercially successful musician that I like.

You said you included a surdo drum to imitate a heartbeat on “If I Wasn’t Broken,” and that you hoped the result felt soothing to listeners who were hurting. Sound healing is an interesting practice involving vibrations and rhythm — were you aware of that at all when creating the song?

Dang, that’s heavy. Well, I don’t know a lot, but I used to work for ayahuasca ceremonies.

Right, so you’d have to be soothing and calm.

When I did the ceremonies, I would only play instrumental music, and it would kind of be trance. There was a shaman, and then the shaman had an apprentice or something. They would come up to me, and be like — it would be depending on the chord, if there were too many minor chords — ”That’s too intense. You’re going to really freak someone out.” It was really serious.

One time, there was a lady, she had to move away from me because it was just too much. It’s like they were in a different state, but it made me learn about how … like I feel like every note and chord has a personality and some kind of way it can affect someone and give someone a mood, but you could really study it, I guess. And even the rhythm! If the rhythm would change a certain way, it might be too aggressive and freak people out, even if everything you’re playing is … it’s crazy. I learned a lot about what actual soothing is.

Maybe you didn’t study it, per se, but it sounds like you’ve absorbed something because especially on “The Change You Make” and “With the Sun,” there’s a melodic trance happening there.

Yeah, I think after doing the ceremonies I got more into playing softer music. I did it for four years. I met these people on the boardwalk and they invited me, and then I met the shaman. They did two a month. I thought it was creepy. The first day I went, I was like, “This is a cult,” because everyone was wearing white. It was weird to me. It was really hardcore hippie shit I’d never been exposed to before.

Especially if you have to be in the background not reacting.

I was just there trying to make some money and I was like, “Dude, what are you doing?” I was freaked out.

That would be intense.

But then I got used to it. I found out a lot of the people that were going to the ceremonies had PTSD from crazy stuff that happened to them, and they’d been trying to get help. It was pretty heavy and serious. It helped me not feel weird anymore about it because at first I was like, “These people are getting high in a really weird way,” but then I was like, “This is medicine.”