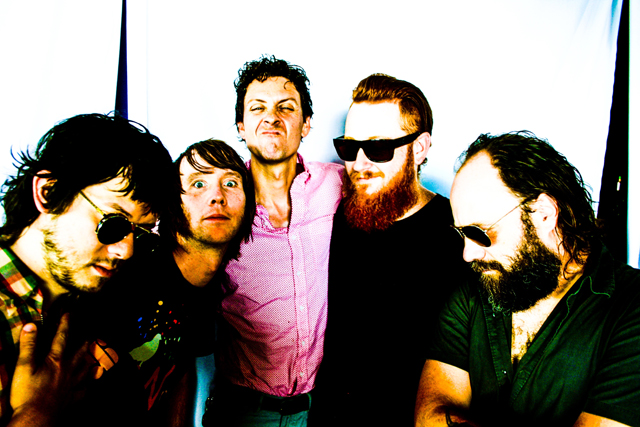 Tour Food: I'm not sure that I have ever seen anyone in our band eat sushi. Maybe Matt does. He tours with Drive-By Truckers all the time now, so we only have him for a percentage of the time, and he is a vegan … but apparently his doctor told him he was nutrient deficient and that he really needed to start eating fish … so maybe he eats sushi. Who knows? So we are probably more of a hamburger kind of band. We ate last week at Storms when we were passing through Lampasas, Texas. We heard that Elvis used to eat there when he was stationed at Fort Hood so, obviously, we anticipated a bacon, egg, peanut butter, banana lard burger. They didn't have that, but we all had the triple meat burger. It killed. Bo had a malt that was the size of his head. He couldn't finish it.

Backstage Hangs: Dexateens play dive bars, so this means that there is no such thing as a backstage hang for us. The bar is the backstage and we are sharing it with the people who come to see us play which, for us, is cool. We usually make friends that we can look forward to seeing the next time we are in town … and we like having drinks bought for us, so that's also a plus. Every now and then, we meet someone that wants to press buttons, but Brian knows how to defuse that pretty easily. He is a bartender at the Nick in Birmingham and he is in the business of defusing problem clients.

Radio Station: Favorite radio station is WFMU in New Jersey. We have been supported by them and get to play the studio when we are in town thanks to our friend Joe Belock. Kevin Nutt does a super cool show called Sinner's Crossroads. He wrote the liner notes for our new record, and they are hilarious. He wrote them from the perspective of an old-time radio minister: "Gospel friends, I wish I could say I was immediately blessed with their fine singing and unique approach. But I can’t. It sounded like a lot of racket. It sounded like the world’s largest bumblebee had got lose in there. I thought there was a mistake. I keyed the talkback button: 'Hey son, you can’t play no rock 'n' roll on a gospel station for Christ's sake! Lord.'” Kevin used to see us perform back in the day when we were a young band while he lived in Alabama … We put his liners on the back of an old-time church fan that comes free with the Teenage Hallelujah vinyl.

Driving Album: We don't spend a whole lot of time listening to music. I'm usually the driver and I get uptight in traffic when the music is blasting. What I really enjoy doing is scrolling through the channels on FM radio, and of course there is hardly ever anything of value worth hearing, but when I land on one of the three Eagles' songs that I like … man, what a moment! Seems like classic country radio is getting popular now which is cool. Sadly, some of the bad '80s stuff fits in that category. We took an acoustic guitar on tour one time, just for the van experience and that most definitely didn't work. Driving a van with a trailer while someone sits behind you, banging on a flat top, working out harmonies or arrangements might be the most excruciating thing ever. If someone wants to hear music while we are on the road, more than likely they are going to put in their ear buds and rock it out. I like talk radio, myself.

Car Games: We don't really have any road games. The game is, manage to not stink it up for your neighbor, even though you haven't had a bath in four days; throw away your trash; load your own gear; go to the merch table and try and help hustle some t-shirts; try to be nice to jaded, grumpy sound guys … you know ,that sort of stuff. When you are traveling like we do, there isn't time to see the city and absorb the culture. I mean, we might get a meal every now that then that is special, but for the most part, we eat stuff that is in walking distance of the club. We spend a lot of time at Love's truck stops. We probably would know a lot more about the coffee selection at Love's than we would at some artsy-fartsy coffee house.

House Shows: House shows are the way we came up as a band, and we still love to play them. I probably would have a problem standing in line with college students for a cup of beer, at this point in my life, but having said that, if someone wants to pay us and give us our own stash of drinks, then we really like the idea of getting down and dirty with a bunch of wild animals at a house party. We played a really fun marriage party in a basement in Louisville, Kentucky, a few years back and it was a total blast. We saw the groom at a show in Nashville, and he told us that, unfortunately, he and his wife split up, but the good news was that he had a hell of a "Hope It All Works Out" party.

Record Stores: We would probably be more of a thrift store and flea market kind of band as opposed to one who might visit the trendy bookstore. Same thing with record stores … really love the idea of shopping to buy records, but when you have hit or miss nights, the wives tend to get upset when you come home with a stack of records and no cash. So, unless we have been asked to play an in-store, it's not something we typically do. Love our friends at Grimey's in Nashville and the End of All Music in Oxford. We played a set of Rolling Stones covers a few years back at Grimey's and we were told that Bobby Keys was going to show up and play sax with us. Bobby didn't make it, but Grimey did sing "Rip This Joint" with us and that was a lot of fun. I never realized how wordy that song was til Mike showed up with three pages of lyrics.

Tour Hobby: We recently got an RV. The thing has 22,000 original miles and is from 1994. So it seems like, when we have time, we devote our attention to working out the electrical quirks and trying the make the refrigerator work. We have narrowed the nickname of this thing down to either the Millennium Falcon or the Eagle 5 from Spaceballs. Either way, it seems fitting because we are constantly tinkering with it to make it work. It's probably not the fastest ship in the galaxy, so Eagle 5 might be more fitting.

Dive Bar: It's hard for me to pick one dive bar that we would love the most. You know, there is just sort of a love/hate thing with those places. On one hand, they are truly disgusting, evil places, but on the other hand, when the audience is there and the band is on fire, it can be a super intimate and exhilarating thing. Especially the bars where there is no stage and you get right there with the audience and pour beer on each other … that's a lot of fun. The other thing about them that I find super interesting is the history that a lot of these places have, all the great acts that have come before you playing these old watering holes … the Nick, in particular.

Stretch of Road: Favorite stretch of road would be whatever road is taking us out of town, because that's normally the road that takes us back home. Playing music is great and it's clearly something that the Dexateens can't get away from, but first and foremost, we are family men and the music stuff falls in line elsewhere. That mentality hasn't been great for our careers, but it has allowed us to do our thing as a band without divorcing our wives, fathering mystery children, and ruining our lives. If you removed the wives and the children from the equation, this whole thing wouldn't work.