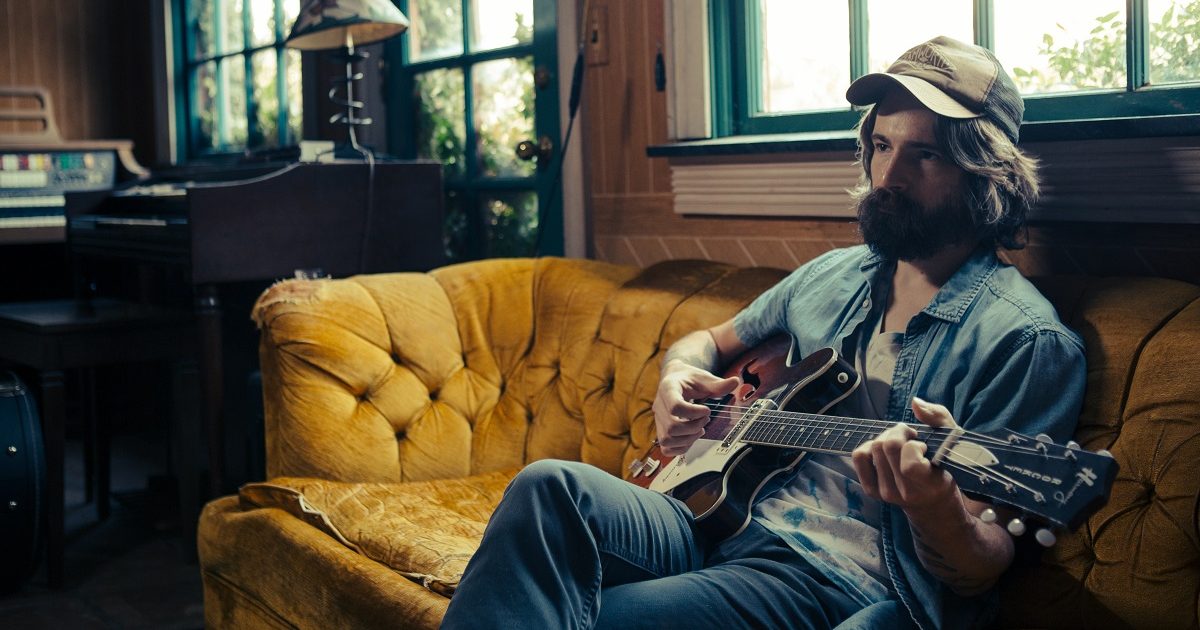 On his new album Depreciated, John R. Miller shows a true appreciation for traditional country songwriting and progressive bluegrass musicianship, even though his music isn’t neatly defined by either one. A West Virginia native who now lives in Madison, Tennessee, Miller unveiled the material at a club show in Nashville just a few days after the album’s release on Rounder Records. His original songs are rich in detail and humor, although his lyrics can get moody enough to satisfy anybody who’s looking for the darker side of acoustic music. Delivered in his rough-hewn baritone, his songs somehow feel like familiar stories that you want to hear again.

Before returning to the road, Miller caught up with BGS at an East Nashville coffee shop to talk about his acoustic heroes, where he found his first guitar, and why he puts a fiddle in a rock ‘n’ roll band.

BGS: You announced this record by releasing “Lookin’ Over My Shoulder,” which is not exactly a happy song, but it does makes me laugh. What was on your mind as that song was taking shape?

Miller: I wrote that after I moved away from the town I’d lived in for a while. It’s a small-town scenario. When you go back after being away, you’re in the mode of trying to avoid some people. It can be tricky to navigate but I thought it was a funny little song that I didn’t think we would end up recording. Then we rearranged it a little bit and turned it into what it is now – and it’s the first song on the record. You just never know, I guess.

Where is your hometown?

The place where I grew up is just off the highway in the eastern panhandle of West Virginia. It has historically been pretty rural. There’s a lot of development around the highway, so it’s turned into a strip mall highway town. Just over the mountain, it gets real country real quick. But for most of my 20s I lived in a river town called Shepherdstown. It’s small, just a couple of bars in town and everybody knows everybody. That was home for a long time, but I felt like I needed a fresh start, so I moved down here. I spent so much time traveling and felt untethered in the first place. A lot of my friends started getting older and moving away. A few of them actually came down here. This was the next place, where I knew the most people and the most couches to crash on for a little while. I decided to give it a shot and I’m still here.

When did you gravitate toward playing guitar?

I was about 14 when I picked up guitar. My dad had a nylon string guitar in the closet that I never saw him play. I was starting to get into music more, and into punk bands that I found out about from my friends. Basically I was trying to learn power chords on this classical nylon string guitar classical guitar. Eventually I wrote that out and got a Stratocaster and tried to do garage bands in high school.

Were you and your friends listening to acoustic music too?

Maybe not when I was a teenager. We were mostly into indie rock and punk rock growing up, like skater kids. It probably wasn’t until I was 19 that my musical interests expanded a little bit. I started getting into songwriters. The real gateway for me was that Steve Earle and Del McCoury Band album, [1999’s The Mountain], which is one of the best out there. I had already found my way into Steve Earle’s music and then that dovetailed nicely with bluegrass and old-time music with that record. That was a big one for me.

Are you a bluegrass fan?

Oh yeah. I’ve lived in the bluegrass world a little bit and during times in my life a whole lot. I used to play in a string band too. It was more like a fiddle-centric string band, but we did some bluegrass stuff as well and got on that circuit for a little while. There were a couple of guys in the string band that were ahead of me in terms of what they knew about and what they liked, so they helped me learn about a whole lot of stuff.

Who were some of your influences in bluegrass?

I’m a huge Jimmy Martin fan. That stuff’s so cool and just kind of ragged in all the right ways. The Stanley Brothers, of course. There are some modern bluegrass bands that I’ve grown to love a whole lot. Town Mountain is one of the best out there. We crossed paths with them a little bit back in the day and it’s cool to see them still doing it. The Seldom Scene’s Live at the Cellar Door record is a classic too. I really love that. I also really love that early newgrass stuff, like Old & In the Way and John Hartford. That Old & In the Way record was a constant in the van.

Speaking of that, how did you get the idea for “Half Ton Van“?

That song in particular, I spent months looking for an old van to get the band moving. I was on Craigslist and Marketplace a whole lot. I feel like I was seeing a lot of the same tricks, you know? I went to look at a lot of terrible vans. It was a few years ago and I had already been through a few vans with other bands, and it always feels like I’m trying to find one at the last minute. I ended up getting one that was full of rust holes and leaking oil and everything like that. So the song is an amalgam of all those experiences of people trying to sell their junk to you.

At your show, the crowd really responded to “Shenandoah Shakedown,” which surprised me. It has that gothic feel, and seems to be the sleeper on the record.

That one seems to be doing pretty good. I wouldn’t have expected that either because it’s kind of different. It doesn’t strike me as an accessible song necessarily. That one is heavily inspired by living on the river out there. It’s more of a collection of vignettes of time spent up there, and some mushrooms and whatnot involved, you know? Some of the characters are composites but there are specific people in it, for sure.

There’s a lot of fiddle on this record too. Why do you like having that in the mix?

I love fiddle tunes and fiddle music and I spend a lot of time at fiddlers conventions, like the Clifftop Appalachian String Band Music Festival in West Virginia, or in Mt. Airy, North Carolina. It’s been a constant in my life for a really long time now. I’ve got a lot of buddies in that world and I play a little fiddle myself too. It’s a great way to just sit down and play tunes with people. The communal feeling and the non-commerciality of it is really cool. So I’m a little obsessive about it. Putting fiddle in a full rock ‘n’ roll band sounds good to my ears, and I also feel like if it wasn’t there, I would miss it — the presence of it.

Why did you want to include a guitar instrumental, “What’s Left of the Valley,” on here?

I’ve definitely written a couple of guitar pieces, but my partner Chloe really liked that one. I played it for her and it was her idea to just try it in the studio. We took a break from doing the stuff we had on the docket and gave that a try. It ended up feeling so nice, I thought it would be a good way to break up the songs on the record. I like that kind of stuff too, like an instrumental interlude.

At your show I was happy to hear you cover a Gary Stewart song, “Single Again.” What is it about that honky-tonk sound that appeals to you?

Man, it just sounds so cool to me. There’s a really wide range of it but that Gary Stewart stuff is so cool and so nuanced. A really high level of musicianship playing pretty accessible music is pretty awesome. I love country music very much. That’s been my soul food. Early to mid ‘70s is the sweet spot for me.

As a songwriter going into a music career, did you always want to have a full-band sound?

I don’t mind playing by myself — it’s kind of its own thing — but I’ve always played in bands and I love that connection. It’s so much fun. I prefer to be making music with my buddies and I’m fortunate to be playing with the band I’ve got now. They’re easygoing folks and great musicians. We’ve been on the road for a little over a week now and this is the first long tour that we’ve gotten to take together. We’re all getting used to it again.

Listening back to this record now, what goes through your mind?

I’m really proud of the work we did and what I love most about it is that I got to actually sit and play the songs live in a room with some of my close friends. Adam Meisterhans, who played guitar with us the other night, co-produced the record. He and I played in bands in West Virginia. I know him from Shepherdstown too. He’s like a brother to me. So it’s been cool to very intentionally work on a project and have it get finished and work out, you know? It’s nice to know that we did it the way we wanted to.