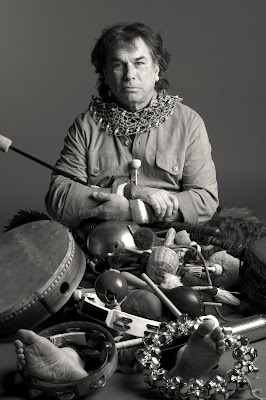 “The title MysteriumTremendum means the sense of awe and wonder we feel about the vastness ofthe infinite universe.  It came tothe ancients as they pondered the night sky…”

Are you ready to dance with the infinite universe?  It’s been a good year of writing showpreviews for BluegrassLA, but I’ve never been able to ask a question quite likethis one.  So let’s consider whatwe have before us.  I repeat:  Are you ready to dance with theinfinite universe?  There’s a thumpingin our souls.  It’s powerful,mysterious, and just downright grateful. Why bother trying to sugarcoat this?  Mickey Hart– THE mighty Rhythm Devil- or at least onecrucial half of what we know as The Rhythm Devils- is back in Los Angeles!

Mickey Hart will forever be remembered for his percussion withone of America’s most beloved rock n roll acts, The Grateful Dead.  But just as other Dead members haveexplored other exciting outlets after Jerry Garcia’s death, Hart has assembledone of his strongest musical platoons in recent memory.  The BluegrassLA team urges you all-Deadheads of old and today’s modern rock fans, come join us at the El ReyTheatre on Friday evening.

Hart will be revealing new songs from Mysterium Tremendum, set for release on April 10, 2012.  Inspired by the “infinite universe” andlyrics penned by the legendary Robert Hunter, Mysterium Tremendum will likely take us on yet anotherunpredictable but irresistible journey that only Mickey can lead.  In an email to his fans, Hart declares:

‘This band is on fire and the CD shines like a silver dollar.We are ready to get on the bus to create something special and unique withthese new songs. We’ll be pulling out some of my favorite Dead tunes on thistour and take them for a ride as well. Music connects us with the spirit in usand we need this powerful medicine now more than ever.’

While Hart assumes his normal role on percussion, anall-star cast joins him on stage. Widespread Panic’s Dave Schools will be playing bass.  Lead guitarist Gawain Mathews works hisinstrument somewhere in between the styles of Jerry Garcia and Jimmy Herring,so Dead and Panic fans are in for a treat.  The soulful Tim Hockenberry plays keys and shares vocalswith acoustic guitarist Crystal Hall. If we are fortunate enough to hear “Brokedown Palace” or “Not Fade Away”(check the five minute mark of the posted video), you’ll surely see why Mickeychose these singers.  Rounding outthe band are Inx Herman on drums, Sikiru Adepoju on percussion, and Ben Yonason keys.

The Mickey Hart Band plays the El Rey Theatre at 9 pm onFriday, March 2nd.  TheBluegrassLA family will be rockin’ to the drums… hopefully you will too.