SHOW REVIEW: The Lumineers at the Fonda Theatre, Los Angeles 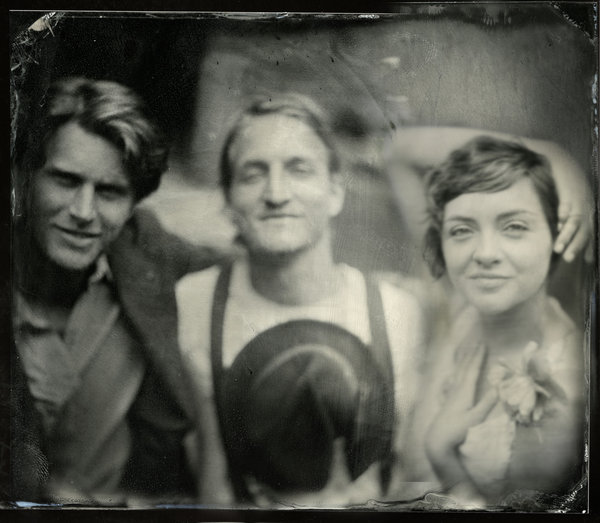 Rarely will I push to try to sneak my way into a sold out show. Like many of my peers I’d recently caught The Lumineers bug (the wild-fire word of mouth generated by their beautifully stripped down, rootsy self-titled release even touches us self-admitted acoustic music snobs) and now I found myself shoulder to shoulder at The Fonda to try and see what all the hubbub was about. Like a massively hyped movie or book, even before this new face of roots-pop came out to showcase their sound, I had my doubts. Would they be the next to ride Mumford And Sons’ wave of heart-on-sleeve-banjo-and-mandolin-pop or would they stand out on their own?

To my relief, The Lumineers were wholly their own animal. Equal parts polished and down to earth, they let their stellar songs do the talking. Having only emerged from their adopted home of Denver less than a year ago, the youngsters reeled in the crowd like touring pros: coordinating clap parts, leading gospel call-and-responses section by section; they even requested folks put down their cell phones so they could fully enjoy the moment. While the cello, guitar and mandolin gave their quieter selections like “Charlie Boy” and “Dead Sea” a Celtic, old-time feel, that often didn’t last long – with the shout-a-long choruses and thumping bass drum and throbbing keyboards indicating they had bigger horizons on the brain.

As the excitable trio — Wesley Schultz (guitar, lead vocals), Jeremiah Fraites (percussion, mandolin), and lovely leather-jacketed cellist Neyla Pekarek (found serendipitously through a Craigslit ad), plus a touring bassist and pianist — romped through most of their record, they stopped every now and again to thank the overflow crowd, almost in disbelief, for packing the house for two straight nights. They had reason to be happy of course. Such a meteoric rise in the niche-world of acoustic Americana music is rare enough, and LA, notoriously a fickle music town for any genre, was giving them a hero’s welcome. Indeed, it was here, Wesley noted, that The Lumineers had played their first ever sold out show.

While they indeed rely heavily on their radio-friendly and sometimes repetitive ho-hey, woah-oh-oh sing-along choruses to whip the audience into a swaying frenzy, (see the hit “Ho-Hey”, “Charlie Boy”, “Stubborn Love”, “Morning Song”, “The Big Parade”) for me it was the incredibly mature and often poetic songwriting that jumped out from song one. A tune like “The Big Parade”, played fourth in the set like a well-positioned cleanup hitter – particularly flexes the band’s muscles in a way that brings to mind the equal sharpness and softness of Paul Simon’s “The Boxer” – with intense swirls of lyrics like:

…only to return, like an old friend, to their OH MY MY / OH HEY HEY chorus – just as Simon took us away from the boxer’s cold existence into the arms of the effortlessly catchy “Lai-lai-lai” chorus.

Mr. Schultz, the blonde heartthrob ringleader in a beat up farmer’s hat, lead the proceedings with an aura of earnestness and gravity that sometimes bordered on the taciturn – often staring resolutely straight ahead as the rest of the band grinned and danced around him. Was he not enjoying himself as much as we were? No, it was something else. Perhaps it’s his seriousness and boyish intensity- he often lifts his guitar up high like Woody Guthrie (and was the one repeatedly reminding us to put down our pesky glowing smart phones) that make us lean forward and listen a bit deeper. The kid has something to say. One can’t help but notice that he has the rare vocal second gear that makes a hit song like “Ho-Hey” go from awesome to really-fucking-awesome, starting the tune in a low ‘let-me-tell-you-a-little-story’ timbre and rising moment by moment to that special ‘holy-shit-here-we-go’ shout:

After jangly surf-rock opener Bad Weather California finished warming folks up, it was a bit odd to see that The Lumineers had an intro song for themselves. As Fleetwood Mac’s “The Chain” blared in the dark, I soon saw that it was a smartly placed catalyst: by the time the curtain rose, most of the audience had already begun singing along. That was precisely the reason we were there, right? Like a couple on their honeymoon, the crowd and The Lumineers were an inseparable, amorous entity all night long, with the singing-along, often word for word and at full throat, not stopping for about two hours.

And yet – while I do enjoy belting out a tune with the band as much as the next guy, I’ll admit I did miss some of what made their record so appealing – the simple, quiet, almost-diary-entry honesty that comes from a small band talking frankly about big things – love, loss, political turmoil, family. With the whole crowd shouting every word, I wondered half way through if any of us were even listening to what the songs were about.

A highlight for me was as-yet-untitled new duet that utilized cellist-singer Neyla Pekarek’s gorgeous voice. Going back and forth with Wesley, egged on by an Apple-commercial-catchy piano part, they sang about what boys and girls sing about best – falling in love and figuring out what the hell to do about it. Another great moment was when they climbed into The Fonda’s art-deco alcoves and sang acoustically (another new tune with an ‘oh darling’ chorus plus glockenspiel solo) back and forth across the hushed crowd.

The only slight missteps of the night were the covers. A strange, ominous version of Dylan’s folk-rap “Subterranean Homesick Blues” didn’t quite gel and an encore version of The Stones’ “You Can’t Always Get What You Want” collapsed badly at the end – prompting Wesley to come back out to finish with a lovely Dylan deep cut, “Boots Of Spanish Leather”. It was indeed a wise choice. While it was clear we had come to sing-along to a fresh batch of soon-to-be-classic tracks, Mr. Schultz made it clear that The Lumineers wish to be more than a mere acoustic party starter. Like Mr. Dylan, they intend like to stick around for a while.