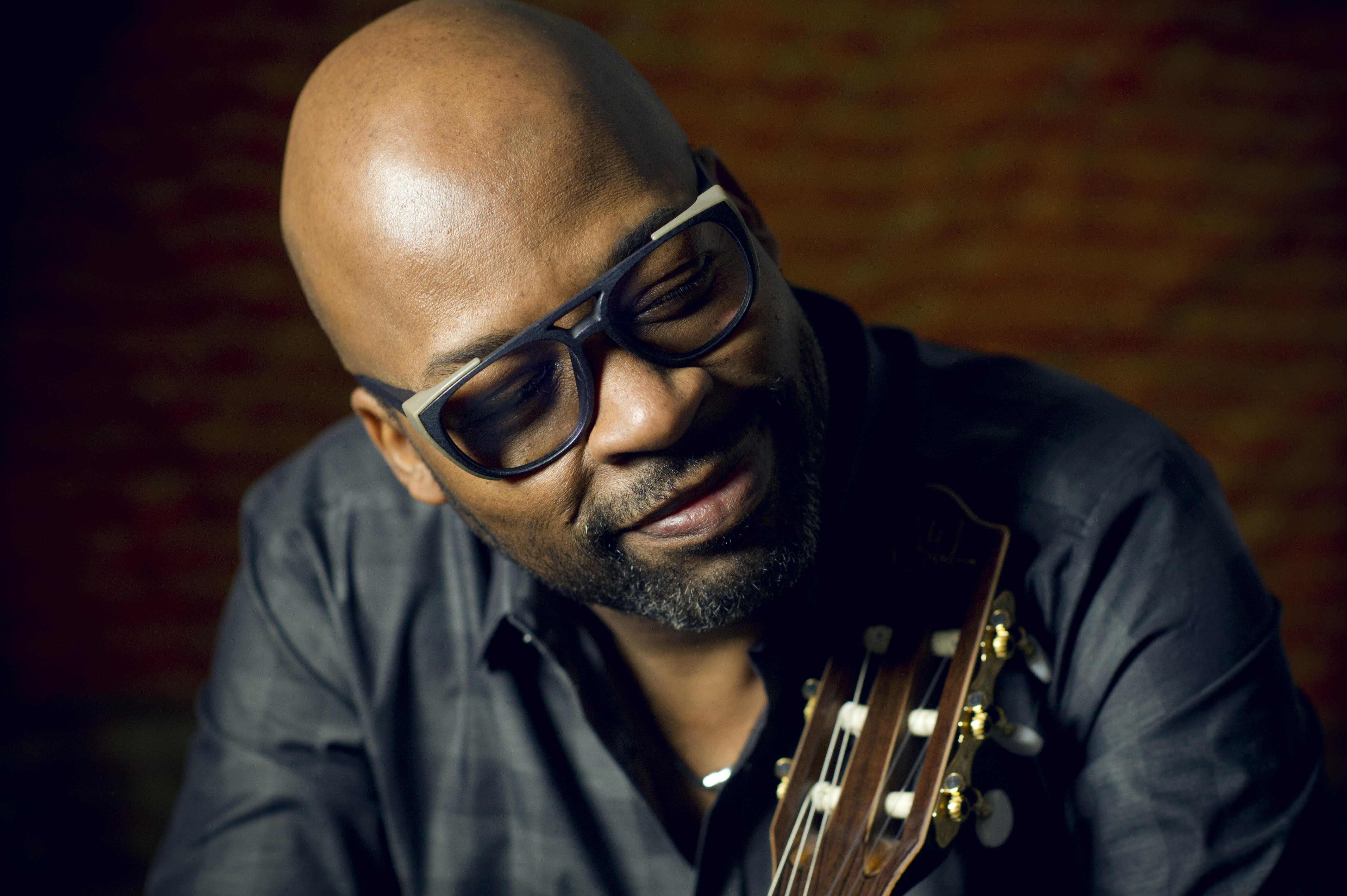 Lionel Loueke sat in a hotel room while on tour somewhere in Europe about a year and a half ago, watching the news on TV. The Benin-born guitarist, whose inventive playing has astonished many through his roles with Herbie Hancock, Terence Blanchard and his own band, was horrified by what he was seeing.

“It was a ship,” he remembered of the coverage. “A boat that came from Libya, I think. Many people died in the sea. I remember seeing kids, pregnant women in a boat and in very ugly conditions tossing the Mediterranean.”

It was a boat carrying refugees from North Africa to Europe, people trying to escape war and famine, only to perish on route. He was overwhelmed with emotion. He responded in the way most natural to him.

He picked up his guitar.

“I wasn’t thinking of composing that day,” he says. “Just playing some simple triads. I recorded myself improvising, all triads, more of a classical style.”

As much as what he was watching tore him apart, made him angry and pained by the horror and violence of it, the music he was making didn’t sound angry, did not reflect the violence and brutality. Instead it was music of gentility.

“I’m personally a non-violent person,” he says. “I practice Buddhism, with Herbie now for a few years. That comes through my playing and my music. There are other ways to resolve problems than violence. I think we touch more people this way — maybe the gentle part will catch more people’s attention than something angry and aggressive. That’s the way I see it.”

And that is exactly the tone throughout his new album, The Journey, which includes “Vi Gnin” (“My Child” in the Mina language of a coastal district of Benin), the piece that grew from those triads he played in the hotel room.

It’s a tone that tied to a lot of things for him as he watched and played that day. He thought of other ships, ships that took people from his home region in an earlier era across the Atlantic to be slaves in Brazil. And he thought of the music of Brazil of more recent times, echoing the earlier eras, sounds that thread through the album.

The album, the 45-year-old musician’s seventh as a leader, doesn’t start with slaves being taken to South America, though. It starts with some returning to Africa. Opening track “Bouriyan” is a lilting samba, inspired by those who moved back to Benin, once a Portuguese colony, from Brazil as slave revolts racked the country during its fight for independence in the 19th century. It’s something to which he feels a very direct connection, as many of those returnees settled in the town of Ouidah, where his mother grew up. Loueke has indelibly fond memories of his mother cooking feijoada, the Brazilian-rooted beans-and-meat stew. But of course he had no idea of those roots.

“For me, I thought it was from Benin!” he says. “That’s the real connection.”

It was the same with the music that came from the Brazilian ties.

That came later, when he left Benin as a young man to study jazz at the American School of Modern Music in Paris. “I started hearing the Brazilian guitarists,” he recalls. “First guy I heard was Baden Powell. Then of course João Gilberto, Gilberto Gil. All those classic Brazilian composers.” And, of course, Antonio Carlos Jobim, the essential Brazilian guitarist-composer of “The Girl From Ipanema,” “Desafinado” and so many others at the foundation of the canon.

“Jobim! Jobim might be the second one I heard. I was already playing some of those standards, classic songs we all knew.”

For many, that connection may be a bit of a revelation. The evolution of some music back and forth across the Atlantic is well-known — the way Afro-Cuban music sprung from Yoruban roots and then returned to be embraced and reworked in various African locales, most prominently. But the sounds associated with Brazil on which Loueke draws for The Journey are lesser associated with Africa.

“You have the return after slavery, that part is not well-known,” he says. “But pretty much in every country where you have the coasts, some of the slaves who came back on different coasts got together and used the culture back from where they had come from.”

That all provided the starting point for creation of the music here, under the guidance of producer and co-arranger Robert Sadin, starting with Loueke’s guitar and vocals, with words in Mina, Fon, Yoruba and his own “language” of clicks, hums and sighs. They then brought in a variable cast of complementary, enhancing support, a wide-ranging roster including Brazilian percussionist Cyro Baptista, bassist Pino Palladino (the guy who, among many other things, stepped in to the Who when John Entwistle died), New York saxophonist John Ellis, Trinidadian trumpeter Étienne Charles, classical clarinetist Patrick Messina, versatile cellist Vincent Ségal and Benin-born percussionist Christi Joza Orisha, as well as Loueke’s long-time trio partners, bassist Massimo Biolcati and drummer Ferenc Nemeth.

“We didn’t think about who was going to play at the beginning,” Loueke says. “I was doing three days myself for the project, then we decided based on that who would be the right person to bring something magical. Choice was to find musicians who can bring something different, refreshing.”

Refreshing is a good description of Loueke’s whole approach to music, but also dazzling in technique and originality, something he developed from his youth when he came under the sway of the music of Wes Montgomery, Charlie Christian and Grant Green, then developed in his studies Paris, in Boston at the Berklee College of Music and in Los Angeles at the Thelonious Monk Institute — his audition at the latter being in front of a panel that included Hancock, Blanchard and Shorter.

All of that, all of him, is in this new album more than anything he’s done before, he says. It comes through strongly when he talks about the songs and their inspiration, what they mean to him.

“‘Kába,’ when something good or bad happens we look up or down,” he says of one. “Kába means ‘sky’ and it’s all about looking to the sky. We look for hope. We are thankful.”

Of another: “‘Gbé’ means ‘life,’ how life is beautiful at the beginning, but sometimes there are the roses and you have to be careful when you’re walking or step on the thorns.”

And another: “‘Molika’ is a song I wrote for my kids — Moesha, Lisa and Mika.”

He’s reluctant to call this a political album, despite the initial matters that spurred it. It goes much deeper than politics.

“It’s a very personal record for me,” he says. “I call it The Journey for that reason. It’s kind of a resume of all I’ve done from the beginning as a musician, and as a person, until today. And this is the right time to talk about these things. I’m not a political person. But to speak out, musically, to make a statement — well, after all for me we are living it, one way or another.”