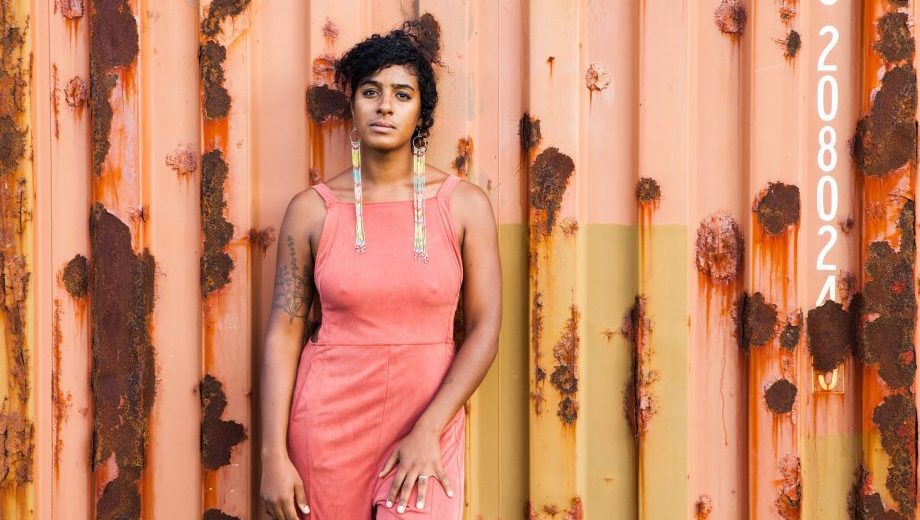 Many seeing Leyla McCalla’s performance at the New Orleans Jazz & Heritage Festival last May had a bit of a surprise midway through the set. It wasn’t just that the musician and singer, generally associated with cello and banjo, strapped on an electric guitar. And it wasn’t just that the guitar was poised precariously over her very pregnant belly (she would give birth to twins three weeks later).

It was the music she and her band launched into that provided the shock, intentionally: A powerful new song, dense in structure, forceful in rhythm, marked by her despairing vocals and distorted guitars.

The song, “Aleppo,” captures deep emotions she had while watching in-the-moment accounts of the horror experienced by those caught in the 2016 siege of the Syrian city. It was a dramatic departure from the largely acoustic Haitian/Louisianan/Delta/etc. inspirations of the rest of her set and of the two solo albums she’d released to that point, as well as from the African-American string band renewals she’s done in the Carolina Chocolate Drops.

But it’s also a sonic center, if an extreme one, of her new album, The Capitalist Blues. Working with producer Jimmy Horn, a.k.a. the formidable frontman of New Orleans’ rowdy ’n’ raw R&B stompers King James & the Special Men, she broke into new territories while staying firmly grounded in her musical and personal histories. The whole of her is here: being raised in New Jersey by her activist Haitian-born parents, spending two teen years living in Ghana, staying with her grandmother in Haiti during childhood summers, and now living in New Orleans as a concerned citizen and mother.

BGS: “Aleppo” really is quite different from anything you’ve done. How did that come about?

McCalla: I was watching Facebook Live testimonials of the people in Aleppo during the siege of 2016. People basically saying, “I exist. I’m here. This is what’s happening in my city.” It was really surreal… I had the line come into my head: “Bombs are falling in the name of peace.” That opened the doors to exploring the idea, not just the idea, but exploring how violence is seen as a way to peace in our society, how backwards that is, how messed up. I wanted it to sound angry and frustrated and devastating. I think we got it!

It’s not a surprise that you’d take on social issues. You’ve done it before, of course. And the title of the album and the first song is “The Capitalist Blues,” after all.

A lot of my songs come from a very personal place. And then I start to realize that my personal experience is related to many others’ experiences. I started writing that song several years ago when I was really just starting my [solo] career. It was new to me having an agent and a manager and discussing publishing deals and the business of music. It was a conflicted feeling of making music and being an artist. And I saw how many people can’t even find jobs, and the housing market is out of control and gentrification is everywhere. I sat on the words a long time and one day just came up with “I’ve got the capitalist blues,” and very quickly realized that it would be the title of the record.

You made it at Preservation Hall in the French Quarter in a traditional New Orleans jazz mode.

I’d always imagined it as a brass band, but didn’t know how I’d pull that off. It was such a dreamy experience to record it at Preservation Hall with basically the original Palmetto Bug Stompers band featuring [drummer] Shannon Powell and [banjo player] Carl LeBlanc.

The move into new sounds seems a natural progression.

[On my earlier records] I was inspired by field recordings, before there were amplifiers and electric guitars. But I was listening to Coupé Cloué, one of the forefathers of konpa music, Haitian dance music, what bachata is to the Dominican Republic. The origins of konpa are in Haitian troubadour music, music I was inspired by. A lot of these songs talk about social and political issues, metaphorically in coded language.

I was listening to [Cloué] and Trio Select records, same concept musically but with electric guitars. Magical music. I thought about the late ‘60s and early ‘70s, everything being plugged in, Bob Dylan at Newport. My band has been cracking me up — “We’re like the Band for you!” Yeah, and it’s 2019 and people might still be upset about this! But it’s a natural extension of what I did before. I’ve never been a purist.

“Heavy as Lead” is as personal as it gets.

I wrote that song in one day. All the words came down and, Boom! it was a song. My daughter had elevated lead levels in her blood and I was devastated with that. I don’t like to think of our home as unsafe, but I realized all my friends with young children have that experience. This is a systemic issue.

You have three cover songs on this. The calypso “Money is King,” originally by Neville Marcano, and the Haitian “Lavi Vye Neg,” by Gesner Henry, are familiar territory for you. But “Penha” is Brazilian, with you translating the Portuguese lyrics into Kreyol and English, something a bit different.

That’s a Luiz Gonzaga tune. I’ve been a big fan of Brazilian music since I was a teenager. My dad introduced me to the [1993] album Tropicalia 2, by Caetano Veloso and Gilberto Gil. Then I got into Caetano and saw him perform when I was 15, blew my mind, how he mixed indigenous Brazilian music with rock ’n’ roll. I hear the same chord changes and inflections in Kreyol music, not just in Haitian music but Louisiana and Cape Verde and all over Latin America, Trinidad.

The original title of this song is “Baião da Penha” — Baião is rhythm and Penha is the statue of the Virgin Mary. I loved the sentiment of it, believing in peace. I found the lyrics in Portuguese online and I went on Google Translate to translate the lines. I liked the melody but had no idea what it was really about. Then I thought, “Oh, this would be so cool if I could also sing this in Kreyol!” And that’s what I did.

I grew up with a lot of people speaking Kreyol around me, but not necessarily to me. Spent the summer with my maternal grandmother in Haiti in ’95, and after that was fluent, but after that I lost it. My comprehension has gotten much better since I’ve been exploring Haitian music, and spending more time in Haiti. I was 10 with my grandmother there. She was very determined to make me love Haiti and help me develop a Haitian-American identity. I think she thought me and my sister were spoiled brats and needed to come experience what other kids were like. That had a huge influence on my life path.

I can’t really talk about why I’m influenced by all these different kinds of music without addressing the oppression of Haitians and black people in the world and why that exists. I live in this. I deal with racial bias on a daily basis. It’s endlessly fascinating, not something that will be solved. I try to puncture the glass ceiling of preconceived notions of what it means to be Haitian, what it means to be black, what it means to be Kreyol, what it means to live in Louisiana. All that becomes part of my music.

You close the album in Haitian parade mode with the band Lakou Mizik on “Settle Down.” How did that happen?

I got really lucky. They played at JazzFest this past year and in 2017. When I recorded with them it was the spring of 2017. I was listening to NPR and they were talking about people protesting at the inauguration who were arrested. They want us all to settle down and fall into place and be complicit to whatever political motives they have. I was thinking about what it means to protest, what it is to march in the streets, how powerful that experience can be. They were putting anti-protest legislation on the table. They just want us all to settle down. So I knew I wanted the song to be part Kreyol and heard it as a rara tune. They [Lakou Mizik] have those instruments and play that style, that’s how they started as a band. It just magically worked out. Hard not to feel it was meant to be, it was written in the stars.