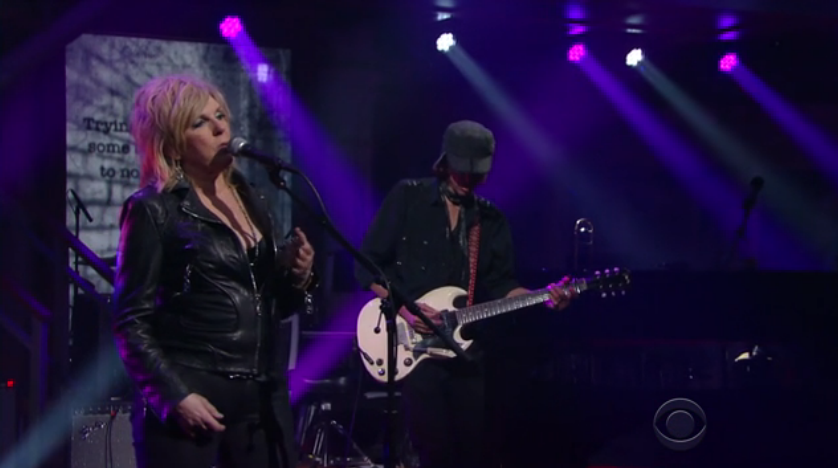 Getting a coveted performance slot on a late-night TV show is no easy task. Unless you have a Billboard hit or the last name Bieber, odds are you won't make it onto what's become some of television's most prime musical real estate. For roots musicians, that means fewer shots at late-night stardom and fewer chances to reach the wide audiences such performances award. But luckily, The Late Show's Stephen Colbert is changing the game, championing up-andcoming roots musicians and introducing their music to his legions of loyal fans.

We've rounded up some of our favorite roots performances from The Late Show below. Check 'em out!

Kacey Musgraves, "Late to the Party"

Kacey Musgraves is no small star, so it's not as much of a surprise that Colbert would invite her to the stage to perform "Late to the Party," one of the standout tracks from her sophomore album Pageant Material.

John Moreland, however, is a surprise — Colbert gave the talented Oklahoma singer/songwriter his network television debut when he invited him to perform this track from 2013's In the Throes (despite Moreland releasing High on Tulsa Heat last year) earlier this month.

Lake Street Dive is a big name in the roots community, but their reach doesn't extend far beyond the genre's boundaries. Colbert had them over anyway, and the Brooklyn quartet got to wow the audience with this tune from Side Pony.

Margo Price, "Hurtin' (On the Bottle)"

The first country signee to Jack White's famed Third Man Records, Margo Price may not be a household name yet, but it's only a matter of time before she is. This performance of her debut single on The Late Show is sure to be part of what seals that deal.

Daughter of Lee Ann Womack, Aubrie Sellers is no stranger to the late-night circuit, although this performance on Colbert was the first time she was the one gracing the stage, performing a cut from her debut album New City Blues.

Okay, so maybe a band as big as Wilco doesn't exactly need a television champion, but it's great to see them hit the stage to perform this tune from 2015's Star Wars nonetheless.

Finally, don't miss this stunning performance from Lucinda Williams of a poem by her father (the late poet Miller Williams) that she reinterpeted and set to music to serve as the opening track for her stellar new album The Ghosts of Highway 20.