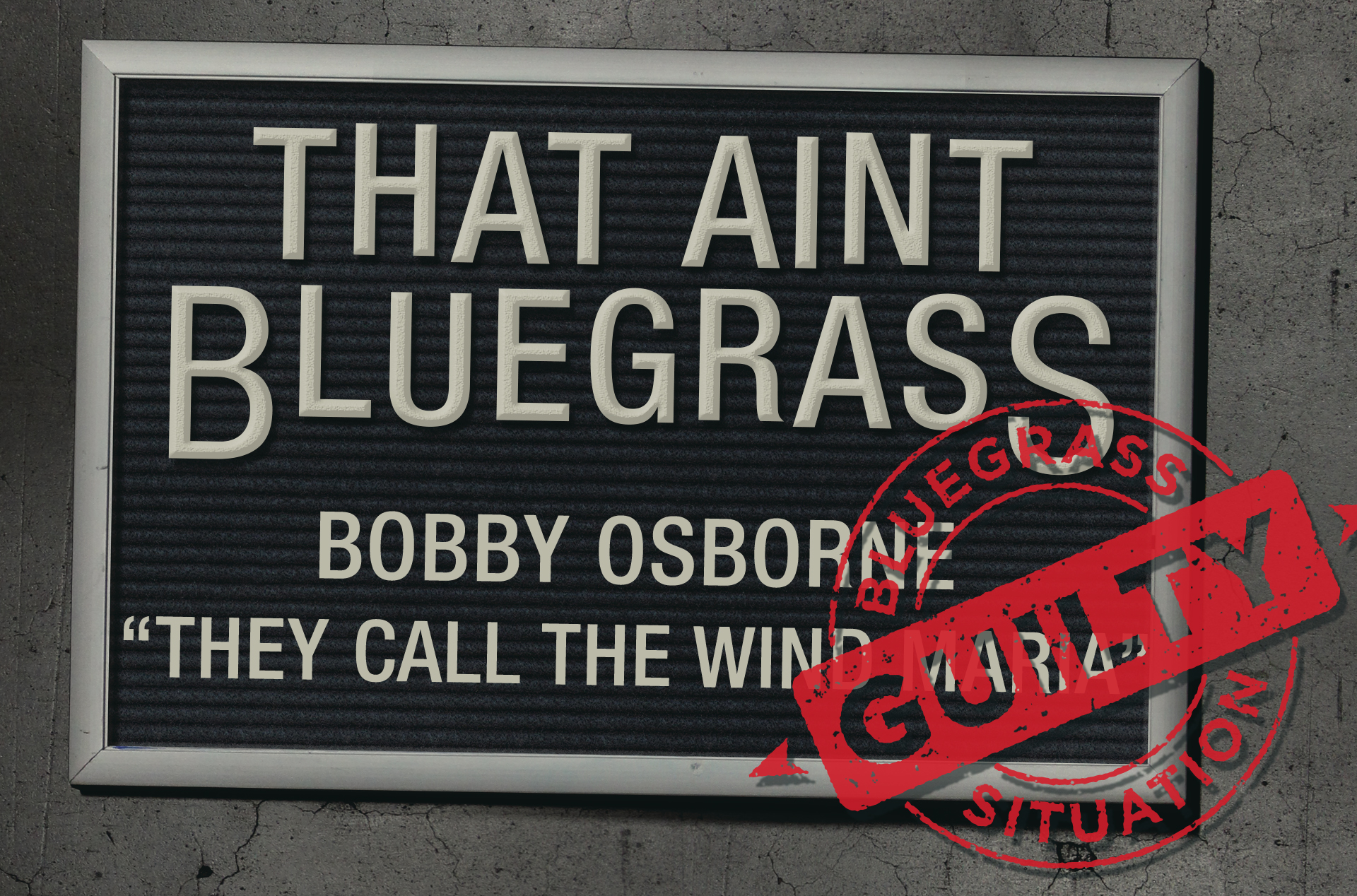 The first ones I ever heard do it were the Browns — Jim Ed and Maxine Brown. I kind of liked it then, but my brother and me didn’t want to cover it right then. It’s been a long time ago since I heard it. This project that Alison [Brown] came up with, with me and Compass Records, I thought about that song. My son and me were trying to get some songs together so we put it down on the list. The chord progression on it and the song itself, I’ve always really liked it. Of course, the Browns did a great job with the recording they had on it. I never did hear anybody else, maybe I didn’t listen, but I didn’t hear anybody else do it.

When I put it down on the list, Alison wrote me back, she said, “That was one that I wanted you to do!” [Laughs] So that turned out real good. Then I had to learn the thing, then. The melody and the harmony and all that on it. To me, it was just right down my alley.

What about the song made you think it would be such a great fit for bluegrass?

Well, it’s different from what most people would do, I think, in the story of it. A lot of people nowadays are doing arrangements like that, something similar to the way the melody and the harmony goes with that song. A lot of people are doing stuff that they didn’t do back when the Browns did it. If you went into a key that wasn’t just G, C, and D, you lost a lot of people, way back then. Nowadays, why, it’s not unusual at all.

My brother and me did some things — I don’t know if we were the first or not — but a lot of people in country music were doing that [sort of a thing]. But, as far as bluegrass goes, most of the time it was just plain Monroe-type music, Flatt & Scruggs, and the Stanley Brothers. A lot of folks didn’t go to those keys — what I always called it, the off-keys — with the melody of a song. My brother and I, we got tied in with that harmony we’d come up with and the endings that we had, everything just fit right into the melody of “Maria.” I was really familiar with that type of thing.

Fans might think, “He’s changed that around. I don’t like that kind of music.” But the song was written like that, so you can’t deny that. It fit us so good. Alison said it was always one of her favorite songs, too. Her being the producer, she asked me to do that, and it just tickled me to death. The more we worked with it, the better it got. It turned out to be a great recording.

You remember the song, “Once More”?

We were doing just plain bluegrass, you know, Monroe-type and Flatt & Scruggs. Just G, C, D, bluegrass — three chords to it. Well, we were up in West Virginia, and a man up there by the name of Dusty Owens had a band and he had written that song, “Once More.” He had recorded it on a little label up there. He gave me one of the copies of it and, when I listened to it, I felt that would be a great thing for us to do with the harmony that we had. When we first recorded it for MGM Records, they were strictly [having us record] three-chord bluegrass.

I got the words to “Once More.” We had a couple hundred miles to drive home from Wheeling, and Red Allen was with us at the time — it was just three of us. We got to singing it just like we would normally do any other song, but there was just something missing with it. Of course, we were just doing regular harmony singing then. We had never featured a high lead on a thing in the world. My voice being the type that it was, it was made for high lead. We were just sitting in the car driving along. We didn’t have any instruments or nothing. We were just trying to learn the song. All of a sudden, I don’t know, I started singing the lead in a way-up-higher register. Red Allen was a tenor singer when he came to work with us, so he just started singing the tenor, but then it was the low part. My brother was good on the parts and chimed right in with the middle part and, boy, when we got to singing it like that, we knew right there we had run into some kind of harmony that we had never heard before. We had 200 miles to go and we sang that song all the way home so that we wouldn’t forget what we had learned. That’s how we came across that type of harmony.

When we went to Nashville to record again, we were dead set on putting that on a record, because that was brand new and it was different from Monroe, Flatt & Scruggs, and all that. It was so different from anybody. Wesley Rose was the A&R guy for MGM at that time, so we approached him with that type of harmony, and he looked at us and said, “You can’t do that. That’s some other kind of music and harmony besides bluegrass.” We had a talk and talk and talk. He said, “You put something like that out after what you’ve already done, you’re liable to lose your recording contract.” We were so set on it we said, “We’ll just take a chance on it, if you don’t care.”

When we recorded it, we had been using everything regular bluegrass people used — fiddle, mandolin, guitar, banjo, and bass. We figured the snare drum was perfect with bluegrass. We went back to [Wesley] and said we wanted to add dobro and drop the fiddle. Well, he had a fit over that, too. We hesitated to mention that there was one thing we’d like to do with the rhythm on it, the snare drum, but just the brushes. The guy says, “You’re getting completely away from bluegrass!” Well, no. It’s just going to match our singing. We finally talked our way into him letting us do “Once More” just like the recording is now. He was not happy with that at all.

Well, we all know how that turned out!

[Laughs] Back then, I think it was on the top 40 country, I believe. It made number 15 or 16 on the charts. We never heard another word out of Wesley. [Laughs] That right there led us into going deeper and deeper into that kind of harmony. It became our trademark.

What’s your favorite thing about performing “They Called the Wind Maria”?

I kind of like the hesitation between each line, you know? I like that because we were kind of used to that kind of thing and changing from one key to another. That’s one of the main things that really took the song off with me. The hesitation between each set of two lines. Then the tune of it, the melody to the song. When we put the three parts to it, it really dressed it up and made it even different from what the Browns did.

Well, after what me and my brother have done, there’s not much we can say to argue with what anyone thought! [Laughs] People still ask us about it.

When we switched from MGM to Decca Records, Owen Bradley was the producer over there. He knew about us and he latched onto [what we were doing] in a hurry. He said, “Do what you want to do. You know more about what you want to do than I do.” We got a taste of country to go along with the bluegrass, and he went right along with us. It really worked out pretty good. When we were allowed to just do what we wanted to with the harmony, the instrumentation, and the lyrics to the songs, when we got into that, it became a standard thing for the Osborne Brothers. A lot of other people jumped on that type of harmony in a hurry. It became a standard thing about every one of them wanted to do.

I love that on your latest record, Original, you’re carrying on that tradition of doing songs that some people might not expect to be on a bluegrass record.

Oh yeah, that was a thing we knew [from the begining] with one playing the banjo and one playing the mandolin and singing [in the Osborne Brothers]. There’s no way we’d ever get away from the sound of bluegrass instruments. What we had in mind was to play those instruments and make them fit with what we were doing. We were putting bluegrass and country music right together, and people just loved it. Our harmony singing fit bluegrass and country music, both. In one sense of the phrase, we had it made right there.