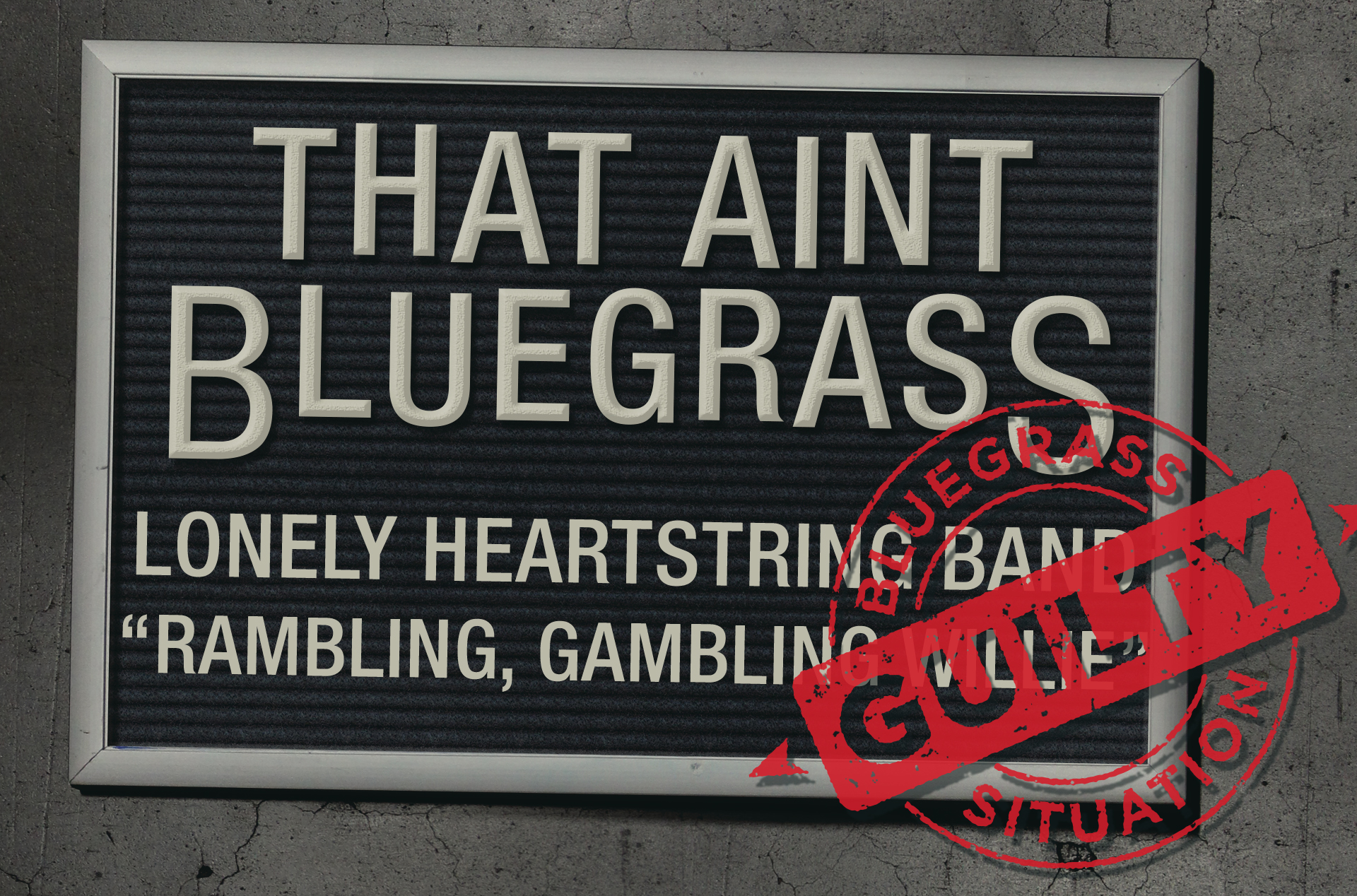 Where did you first hear “Rambling, Gambling Willie?”

Patrick M’Gonigle: Matt [Witler] actually found the song. It was released probably seven or eight years ago now, as part of The Witmark Demos — a set of outtakes from when Bob Dylan recorded The Freewheelin’ sessions. He released a whole bunch of other music from that session. I think it was Matt that thought it would make a cool bluegrass song.

We actually have an interesting side note about that: We had a guy come to a show a couple of years ago and we played that song, introducing it as a song that didn’t make The Freewheelin’ Bob Dylan record. The guy said he went home very confused. He had The Freewheelin’ Bob Dylan album, and he said, “I grew up listening to that record. I know that song intimately. And I never had The Witmark Demos. So I don’t get this.” When he found his copy and looked at the track order, sure enough “Rambling, Gambling” was not on the track order. Then he put the record on and “Rambling, Gambling” was on it! He had one of a very small handful of misprints of the stereo version of that record, and it’s worth a ton of money.

I thought this was going to be a Mandela Effect kind of thing!

It was actually on there!

The title of the song almost answers this question, but what made you all think this would make a good bluegrass song?

It’s got a great, classic chord progression. Also, the timing of the words allowed us to speed it up and have it work. A lot of songs, you speed them up, and the words just become insane or crunched together. The song itself, the words are at a slower pace, so when we sped it up, they totally fit. It’s super fun to play on as a soloist. It had all of the elements. We did the same thing recently with a song that we learned from Willie Nelson. If we hear [three-chord] songs that are slow, but also have a slow word flow, they lend themselves to this. “Rambling, Gambling Willie” was our first experiment with that.

What was your process of arranging the song and putting it together?

It was a few years ago now. When we sped it up, the verses ended up being quite short. There are a lot of them — I think the original version has maybe eight or nine verses. We chose six of them. We chose the ones that told the story cohesively. We cut a bunch of them, and we realized, because we were speeding it up, it didn’t make sense to do verse-chorus-solo. So we did two verse-choruses in a row between solos, which kind of acted as one verse.

The other thing we did, when we worked up the harmonies on the first chorus of each pair, we would do a low harmony and, the second one, we’d do a high harmony, so it would still have kind of an arc over the two verses. One of our favorite, one of our most popular bluegrass songs when we arranged that song was “Born to Be with You” by J.D. Crowe and the New South, which we still play. That has a really cool arrangement style where the banjo finishes every break. We applied that to this song, too. When it gets to the chorus parts, because we would solo over verse-chorus, Gabe [Hirshfeld] on the banjo would always solo over the chorus part.

Bluegrass has always had this tradition of reworking and revamping songs from outside of bluegrass since the very beginning. Why do you think this still happens?

I feel like there are several answers to that. For us, we love — in terms of traditional bluegrass sounds — J.D. Crowe and the New South. J.D. is a great example of someone who does that. Like the song “Born to Be with You,” that’s a ‘50s doo-wop song by the Chordettes. The original sounds nothing like what J.D did with it.

Also, I think a lot of the bluegrass themes are pretty constant throughout bluegrass. We have a banter joke on stage that there are only like six themes in bluegrass: heartbreak, drinking or making alcohol, trains, God, and death. In pop music, especially folk revival — ‘60s, ‘70s pop music — there was a kind of poetic awakening and there was a lot more content. That’s one answer: You can talk about more complex themes.

Then, on the other hand, it’s just natural. Especially in this day and age, when there’s so much good music happening all over the place, if you grow up listening to the radio, it’s not just the Grand Ole Opry anymore. Everyone’s listening to everything.

Whatever, man. [Laughs] In our band, it’s different for everyone, but I think, in general, I see the term “bluegrass” as either a help or a hindrance. It’s a double-edged sword. On the one hand, sure, it’s bluegrass. In my opinion, bluegrass is whatever anyone wants to call bluegrass. I’m not concerned with it. Maybe it’s not traditional bluegrass, if you define traditional bluegrass as anything that happened before 1953 or whenever. I don’t feel like it’s constructive, especially in our band, to talk about what is or isn’t bluegrass. To us, that song is bluegrass because we’re taking pentatonic solos over essentially a 1-4-5 [chord progression,] the mandolin is chopping, the banjo is rolling, and we have three-part harmony that’s stacked in thirds. That’s awfully bluegrass, if you break it down as a specific musical form.

If you start trying to define what bluegrass means to us, it can start holding us back, because we can easily decide that nothing is bluegrass. I think it’s better for everyone, especially touring, performing musicians who are trying to expand their markets, trying to talk about diversity, or any sort of expansion, because if you start putting labels on whatever bluegrass is, the conversation is over pretty quickly. Everyone has a different idea.

But, at the same time, bluegrass as a positive aesthetic is really powerful. Bringing in the imagery of traditional bluegrass, in a good way, to any sort of music, incorporated into any of those styles can be super awesome. People can immediately conjure some sort of nostalgic, rural, aesthetic. Those are powerful aesthetics that are very popular in American culture. That’s the double-edged sword, to us.

Ken Irwin had a very interesting thing to say to us after we played at Pemi Valley Bluegrass Festival in New Hampshire — that’s a pretty traditional festival. We were up there playing our music, but at that point, we were probably playing more of the Flatt & Scruggs and Bluegrass Album Band kind of stuff. I kept saying, “Here’s one of our songs” and then, “Here’s a traditional bluegrass song.” Ken pointed out that, if we say that, people will start putting those divisions in their own minds about our music. If the audience loves traditional bluegrass and they want to call our music “bluegrass,” then we should let them. But as soon as we start saying what is or isn’t bluegrass from stage, we might be steering someone’s opinions in directions they wouldn’t otherwise go.