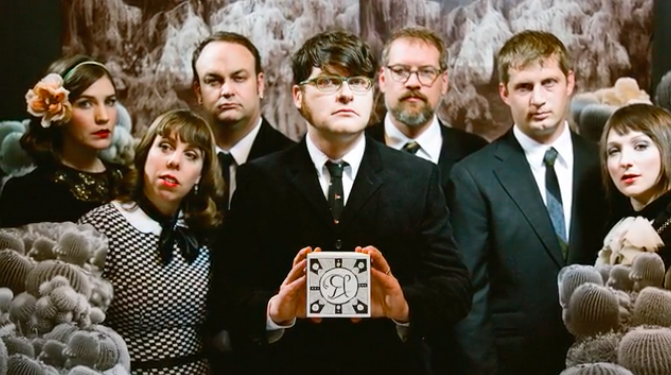 It's no secret that the Decemberists are seriously multi-talented. The genre-defying ensemble of Portland musicians first won our hearts with the cerebral folk-rock of their 2002 debut album, Castaways and Cutouts. Since then, while continuing to put out stellar music (like their most recent album, 2015's What a Terrible World, What a Beautiful World) band members have dabbled in other projects, including lead vocalist Colin Meloy's foray into the world of children's books with Wildwood, a series he co-created with his wife, illustrator Carson Ellis.

Now, the band is bringing another project into the world: a table-top game called Illimat.

Illimat is a two-to-four player table-top adventure designed by indie game phenomenon Keith Baker (of Gloom and Eberron fame) in conjunction with the Decemberists. The game's centerpiece, a cloth "board," is actually a relic of Decemberists days gone by, as it was originally a prop used as part of a fake, mysterious game in photoshoots to promote the band's 2009 album, The Hazards of Love. Inspired by the piece, which was designed by Ellis and photographer Autumn De Wilde, the band decided to make the fake game a reality.

"It’s a totally backwards way to make anything, to start with a sort of finished product and implore somebody else to deal with it," the band's Chris Funk says with a laugh. "We had a lot of ideas for it — what it would look like and what it would feel like. There’s a famous game designer in Portland named Keith Baker who I had become friends with and I asked if he would work on it with us. He took the game board, which was the photo prop, and he had it sitting in his basement every time I would go over and he was ruminating on what this game could be, based on our asks. Eventually, he’s like, ‘Okay, I got it. Do you guys want to get together?’"

Funk attributes the band's interest in table-top gaming to downtime on the road and credits an increased camaraderie among band members to the analog hobby. "The inspiration for it was simply that, on the road, our band started playing games a few years ago to pass the time, typically in the downtime between soundcheck and showtime," Funk explains. "It’s kind of this lull period where people scamper off to their dark corners. Long story short, we have a lot of time on the road, so we started table-top gaming, which has been really great for community and getting back to ground zero. It’s very popular right now and people are coming back to it, as we get deeper and deeper into technology and people just staring into their phones constantly."

Baker's Twogether Studios is currently hosting a Kickstarter for Illimat which, at press time, has raised over $205,000 in a little over a week, trumping the project's original goal of $42,812. Kickstarter backers have a number of support packages to choose from, with rewards including a limited edition tote bag and an official lapel pin. Funk attributes the project's success both to Baker's expertise and to the ever-growing table-top gaming community.

"We did our homework and we worked with Keith Baker, who is, again, a very famous game designer," Funk says. "There’s a lot of muscle behind releasing the game. Kickstarter has become, for gaming, a really successful place. The people at Kickstarter have their own games division, which is really exciting. It’s become a platform to find out about new games."

As of now, Funk expects the game to be available for sale online by late Spring or early Summer of 2017. He also offered a glimmer of hope for fans of the band's music, hinting that, while the game is a primary focus right now, new music is on their radar, too. "We’ll get busy and start doing something next year and see where it takes us," he says. "But nothing solid and nothing to announce, just games."