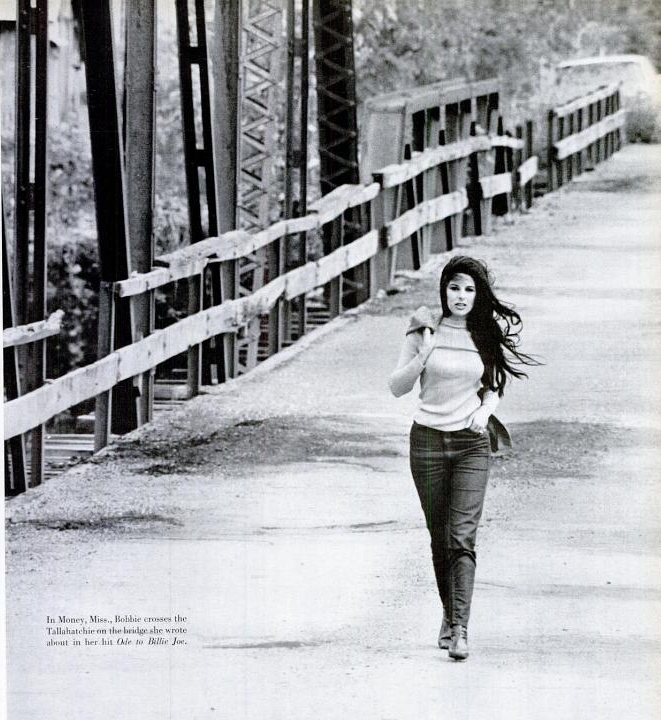 Bobbie Gentry was born Roberta Lee Streeter on this day — July 27, 1944 — in Chickasaw County, MS. She was left by her mother and father at a very young age to be raised by her grandparents and, as legend has it, her grandma traded an old milk cow for a piano so Gentry could learn to play. At 13, she moved to Arcadia, CA, to live with her mom and, at 18, headed to Los Angeles where she started singing and working as a model under the name "Bobbie Gentry." In 1964, she made her singing debut on two duets with the rockabilly singer Jody Reynolds — "Requiem for Love" and "Stranger in the Mirror."

It didn’t take long for Gentry’s deep, sultry voice and earthy appeal to garner the attention of the major labels and, in 1967, she made a splash with her first album, Ode to Billie Joe. The first single was "Mississippi Delta" but, on the flip side, the soon-to-be-classic story of Billie Joe McAllister and the Tallahatchie Bridge became the DJs' song of choice. Despite '60s-era questions of what was thrown from the bridge that day — and why Billie Joe committed suicide — "Ode to Billie Joe" was a bonafide smash, topping the Billboard singles chart for a month, landing at the top of the year-end chart, selling three million copies, and later being named one of the greatest songs of all time by countless magazines and pollsters.

Gentry never found another tune that matched the success of "Ode to Billie Joe" but, over the course of several years she wrote and performed some of the most universally satisfying country music of the late '60s and early '70s. As a groundbreaking artist — who was one of the first women in country music in write and produce her own records — she’s influenced countless contemporary artists, from Joe Henry to Beth Orton. Today, we say “happy birthday” to Bobbie Gentry with this Essential Playlist of some of her best songs.

Life magazine photo of Bobbie Gentry crossing the Tallahatchie Bridge in Money, MS, in 1967. The bridge collapsed in 1972.