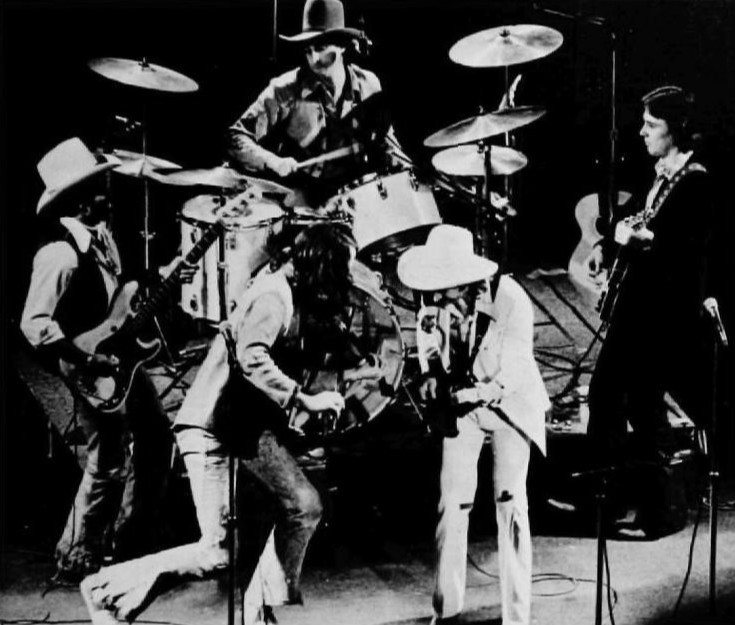 The Nitty Gritty Dirt Band were born out of the burgeoning Southern California folk-rock scene of the late '60s and early '70s. The band was the brainchild of the singer/guitarist duo of Jeff Hanna and Bruce Kunkel, who had worked together as members of the New Coast Two and the Illegitimate Jug Band. Along with Ralph Barr, Les Thompson, Jimmie Fadden and, briefly, Jackson Browne, the band started gigging around Long Beach, California, in early 1967.

After Browne departed for his solo career and John McEuen signed on as a multi-instrumentalist, the band released their eponymous debut disc and won themselves enough attention to score a Top 40 hit, appear on The Tonight Show with Johnny Carson, and open for a strange melange of performers that ranged from the Doors to Jack Benny.

The next several years were difficult for the band as they released a string of commercially unsuccessful records, struggled with disagreements about the band’s direction, and found themselves being treated much like a novelty act. That all changed in 1972 when Jimmy Ibbotson joined the band and they embraced the sound of traditional country and bluegrass. They released their most commercially successful album, Uncle Charlie & His Dog Teddy, won another Top 40 hit (“Mr. Bojangles”), and opened the door to recording what was their career-defining album, Will the Circle Be Unbroken.

Tracked in Nashville, Will the Circle Be Unbroken was a monumental triple album that paired the long-haired, anti-establishment California boys in the band with country legends like Earl Scruggs, Doc Watson, Roy Acuff, and Maybelle Carter. By making that record, the band effectively bridged the gap between two generations of country musicians … and produced amazingly beautiful music in the process.

By the early '80s, the band had changed its name (to just the Dirt Band) and winnowed its roster down to four key members: Hanna, Fadden, Ibbotson, and keyboardist Bob Carpenter (with McEuen leaving in ‘86 and returning in 2001). Musically, the band adopted a contemporary country sound that played well on the radio — and at the record stores — scoring themselves three Top 40 and two Top 10 albums. Their quirky left-of-center style remained even as their sound softened, as witnessed by their appearance in Steve Martin’s hit, “King Tut,” as the Toot Uncommons.

In ‘89, Will the Circle Be Unbroken II was recorded (with contributions from John Hiatt, John Prine, Levon Helm, and Bruce Hornsby) and a third Unbroken collaboration was created in 2002 with a guest list that included Alison Krauss, Emmylou Harris, Tom Petty, and Dwight Yoakam. In the midst of these collaborations, the band spent the 1990s and 2000s making records that blend country, rock, and string music into their own unique sound.

Herein, we offer a brief playlist of tunes that we consider essential to knowing the Nitty Gritty Dirt Band, from their days as cosmic cowboys through their latter-day hits (and, of course, all three versions of "Will the Circle Be Unbroken.")